“War Is Taking Place For The Eyes Of The Audience” 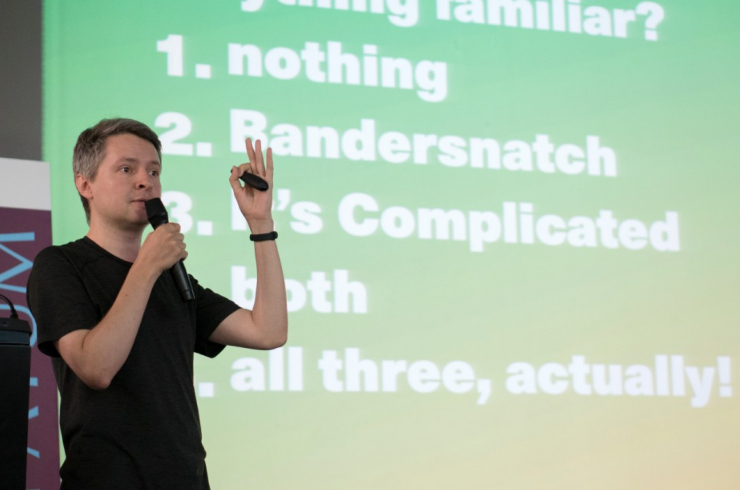 Russian director Anton Outkine thinks that now is the time for hybrid professions: you can be a journalist but at the same time a media producer, director, researcher, etc.

He is the Creative Director at the company Lateral Summer and works on creating interactive stories. For example, his film “Everything is Complicated” which, according to the viewer’s decisions, offers different developments (the heroes may or may not meet, an event may or may not occur). This movie about AIDS is an informative one, it simply tells the story not as an article, but as fiction.

Anton Outkine, who participated in the Tvapatum Media Conference, believes that human rights and fantasy are closely linked to our lives. They even complement each other.

The focus of your next interactive film will be the protection of rights. We have chosen a difficult subject.

Yes, very difficult, but it isn’t an order but our personal decision. The protection of rights is a topic that cannot be silenced. Cinema does not address this subject and sometimes it seems that if we don’t do it no one will.

It turned out that in recent years I have been involved not so much in feature films, but in earthy, documentaries based on real studies. Our research work has been going on for over half a year as we talk to hundreds of people.

Are we trying to overcome public apathy? This is probably necessary if you want to engage the audience in discussions.

Often speaking with my colleagues, we came to the conclusion that we are now competing with the “Game of Thrones.”

In fact, the audience only devotes 1-2 hours a day, to reading, watching or do anything else. And when the conventional “Game of Thrones” is being shown, everybody watches it. That is to say, that one hour per week is already filled.

Then when another cool project, like “Chernobyl,” comes up, people give it another hour a week.

And as media consumption is limited, war is being waged for the eyes of the audience.

A visual generation has emerged that prefers not to read but to watch, and it turns out that the competitor of the media producer is “Game of Thrones,” HBO and huge commercial vehicles.

The media producer has to battle with the giants, trying to evoke an emotional response in his audience.

For example, we decided to make interactive stories because they are emotional and absorbing. Our first film was cautious, we understood the subject was risky.

And now the story will be brighter and perhaps tougher, and will naturally awaken polar opinions. It is interesting how the audience responds, how they decide to participate and disseminate rights-related opinions.

Is polarization part of the concept?

When there is polarization, there is also debate. And if there is a debate, then we have reached our goal.

Important public issues should be discussed. In interactive films, there is always a choice, different plot developments, opportunities to make mistakes, a variety of opinions. The nonlinear plot allows the viewer to discuss the next steps.

The future is rarely seen in cinema, literature, or other media. There’s an impression that talking about tomorrow, 10-20 years from now, is completely taboo in Russia.

These are the consequences of the Soviet state plan. We have been told for many years how we should live. And now a group of politicians is trying to dictate to the people what they want, without paying any attention to the people’s dreams and demands.

Our studio was created as a company for creating fantasy content. And the fact that we want to make a film about the protection of human rights is also part of the fantasy genre.

Projects of the future have a significant lean toward fantasy. We also want to emphasize this by helping to reduce the impact of public stigma.

Yes, sometimes you have to try to deal with perfect, flawless situations, as they help to gain the confidence of the audience.

Good media production leaves an open space where people can pause for a moment, think about the future, discuss, calculate their next steps, eventually change those steps and mature.

In my opinion, “Game of Thrones” is a series about maturing, in the last parts, for example, the heroes are living through that painful process of maturation. Maybe the audience was in an active debate simply because many do not want to grow up. It is unclear how the heroes will live tomorrow. And this is a very modern question, though the characters are dragons, zombies and various black and white beings.

How important is the age of your audience?

I find that many organizations try to hunt their age audience and pin it down. To be honest, it’s hard.

It is easier for us to work for people who grow and mature in a digital environment. And in that case, age doesn’t matter, as very few people live without a digital device.

The important thing is the degree of the person’s involvement.

And is a revolt against digital devices possible?

We are dealing with a machine that is trying to connect us to the screen at all costs. As I said, it’s a war for the eyes of the audience.

More conscious companies are trying to take far-sighted steps, weaken the struggles of the audience a little, to draw a certain line between capitalist aspirations and possible negative psychological effects.

We can already track how we use our phones using screen time.

The use of digital devices is part of ethics, I even think that such a subject should be taught in schools.

Surviving in the phone seems to be reminiscent of Pavlov’s experiments on dogs. It’s a reflex: you posted a picture, it was liked, and you felt pampered and proud. And then every minute you try to relive that pleasure, to check again to see who has liked it. It is a real addiction that needs to be explained, understood, and attempted to overcome.

Of course, there may be people who can only feel complete on digital devices because they see no other prospects, but they are completely abandoned.

And for the majority, the ethics of using the device are the basis for an important debate. Remember the series “Black Mirror,” where devices are the starting point for public discussion.

After all, perhaps everything comes down to the realization of rights.

It is important to remember that there are rights that need to be protected and sometimes you need to be ready to sacrifice something. People are often passive because they are afraid of losing the last thing that they have. This is a very painful topic in post-Soviet countries.

But we do know what end meets those countries where citizens stop fighting for their rights. It doesn’t end with anything good.