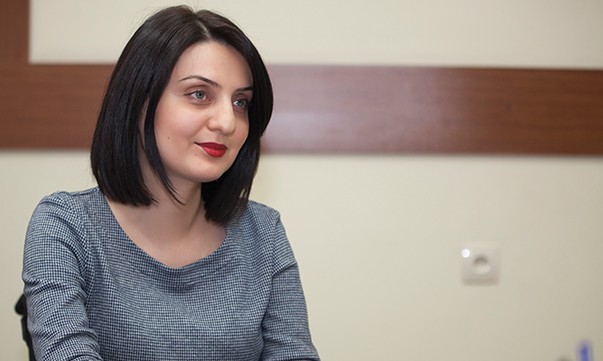 There is one ministry which deals with every person at any stage in their life, from their birth till their death, getting married, working, getting divorced, being unemployed, and being able to work. Man is a social being.

Minister of Labor and Social Affairs Zaruhi Batoyan is convinced that the role of the state is to create a network of a caring society with accessible and affordable programs provided by the state. That’s the state’s guarantee.

Today, the faucet has been opened in the Armenian domain of social networks, and the outpour of hate speech is not restrained. And backwardness is often shown as a sign of freedom, even as a sign of courage.

Zaruhi Batoyan believes that when there is freedom, one should also learn to materialize it.

What will change in the philosophy of the Ministry? It seems as though it should look like a network that connects all citizens indiscriminately.

Unfortunately, today, the public and even other agencies identify the ministry as a structure that cares about vulnerable groups and hands out pensions and allowances.

Of course, all of these functions are included in our work but they are not the only purposes.

It is important that the ministry bears responsibility not only to vulnerable groups but also for all citizens living in the social environment.

Help, that they are informed and secured with information regarding their own rights and know who they should apply to for which situation.

This will also help prevent them from appearing in difficult situations, since in the case of advance notification, providing the necessary information and services, the citizen can choose the program that he/she needs.

To what extent is social media important in emphasizing social awareness?

Social media is of great importance. The demand for popular-scientific, genres containing an educational component is especially high.

The most demanded media genre is the simple format of questions and answers, which many officials feel the need for.

Ministers, deputy ministers, who constantly generate ideas, discuss in debates, create topics and agendas, know very well that today there are all the conditions for their implementation.

One of my first suggestions was that officials have their own pages in social media and communicate with citizens, answer questions and spread information. Of course, it does not exclude offline public meetings and cooperation with existing media outlets.

But it seems that the site is in a sad state.

For now yes, but soon the situation will change.

In general, the priority is communication with both citizens and our partners.

In social media, there is a strong reaction to painful topics, children’s rights, domestic violence and sexual education. We regularly see how hate speech and the snowball effect increases, everything is exaggerated. Do you take this into account? Does your work style change?

Of course, there are many versions of conspiracy, unverified information, but we try not to respond to every rumor.

I think the ministry should be proactive in this situation. In other words, it is not only the case of responding and dismissing misinformation, but also proposing topics and stimulating discussions around it.

In today’s reality, verified information is particularly valuable, since we know that in Armenia very serious media units are working against the government.

And any good initiative that cannot be related to politics (for example, the decentralization of orphanages and returning children to their families) can be simply distorted and speculated through the media.

And it is very important to be a step ahead and respond to possible speculations.

For example, I personally often feel that I am forced to make posts on Facebook and answer different distortions. Citizens should at least be familiar with official sources and verified data.

But we also see that sometimes the official sources are those which are providing incomplete information. Many years of accumulated information are a cause for doubts. Figures are broken, cut out of context.

At this time, we do not have more reliable data than the statistical service provider. Another question is that you need to understand, study and compare that data. You need to look for, find and compare it, especially since now, there is almost no information that is secret.

Of course, except for the State Statistical Service, there are other researches with different justifications and samples.

Recently, I have published the Investigative Committee’s data on cases of sexual violence. And one of the journalists, manipulating my data and allegedly referring to them, applied to the police to get a comment, noting that I said these cases had increased. As a result, the police commented that I was wrong.

The problem was that we quoted different statistics and sources. It is natural that the journalist had manipulated knowing that it was unlikely that citizens would be able to differentiate the sources.

Now it’s easy to look for and find information. It’s another thing that you need to be a media expert to know that the information should be checked in order for it to become credible.

And we need to remember that as easy it is to find information so it is to fake it.

Disaggregated data is extremely needed because they are prompted by a policy.

But, of course, there are cases when we deal with data that tells us nothing, but for some reason, they are being collected for years.

How do you think happiness can be invested into public programs as a counterbalance to the atmosphere of hate? It is known that there are ministers of happiness in the world.

Since happiness is a subjective feeling, I think it’s an opportunity for people to focus more on their inner world to understand how much they feel self-sufficient, how they value their relationship with the environment.

That can happen when we are free form not only certain domestic problems but also to be free from discrimination and unjust manifestations.

That is to say, an atmosphere where a person can create and communicate without negative emotions.

Under the burden of life and everyday life, we often find it difficult to think of happiness, thinking that if we have this or that, we will be happier.

I think the success of the revolution was also the overcoming of injustice and the sense of mutual trust. It is no less important than material accomplishments.

Sometimes we are blamed for making excessive emotional or populist statements, but I think sometimes you have to get rid of restraint, bondange, fear, self-justification (in a bad sense) and express yourself more freely.

That negative energy which exists in the words of many is also because after gaining freedom, people don’t know how to materialize it.

There is one goal: a person must be self-sufficient and develop their abilities irrespective of age, sex and physical condition. Learn again, engage in their favorite work, even with the principle of volunteering, in order to create an environment where helping each other is natural.

And the root of all this is the right communication. For many years, there has been no communication between the government and citizens. I do not mean formal steps when the projects were put into e-draft and then it was said that there was a discussion.

All officials are paying close attention to their contacts, reading their posts on social networks, as well as bad or good comments written under them.

After all, one should speak in the same language to understand each other.

There are many unpleasant attacks and insults on social networks. Is there no desire to be more cautious and closed off?

But I am never afraid of criticism, as I am convinced that any criticism is based on human rights and does not contradict the Constitution of Armenia is useful.

The profession of journalism has taught me that if there is an accusation (even inaccurate), it should be expressed. That law applies to all social life. If there is an issue, a few answers will be found.

When there were attacks on social networks (also by fakes), it was noticeable that I was the first to be targeted as a person with disabilities and as a woman. That is, the insults were completely addressed towards that.

There are posts that it is not appropriate for the minister to speak the way I am, saying that a minister with the right sense of understanding should be different. In these cases, I always say, I do not fit your vision of the Minister, simply on the basis of being a woman with disabilities.

What people consider as a “disadvantage” or “weakness” is a part of me, which is obvious and never concealed from anyone, as I have the ability to experience of life, I am able to not be afraid of my ability.