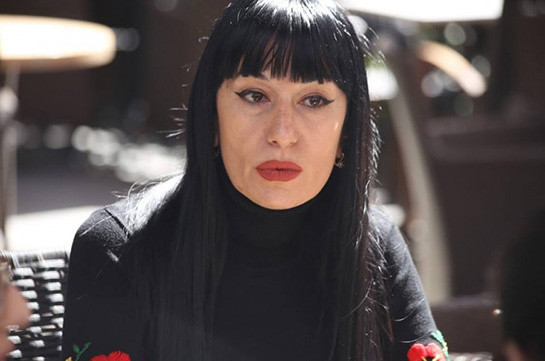 Naira Zohrabyan, a member of the Prosperous Armenia Party, thinks legislative changes in the news media are urgent.

She says that as a former and long-time journalist, she sees all the issues that are in our reality today. And it is important to bring the media platforms which were born in the basement and have no address to the legislative field.

What is the primary issue in the news media field?

There is a need for legislative changes in this area and the need for urgent intervention.

We are vulnerable in that today we essentially have an unregulated media field. That is to say, the law basically regulates print media, and any other platform (which I wouldn’t necessarily even call media) operate outside of the law.

Their activities can be somewhat regulated to at least be obliged to indicate the address and the name of the owners. That is, to have their share of accountability.

Almost every day in different basements there are some incomprehensible electronic websites which declare themselves as “news outlets” and then submit applications for accreditation at the National Assembly and start to permanently blackmail, ask for money from various MPs and wealthy people, so they don’t publish compromising or other types of materials.

And these sites reserve the right to provide information to the public.

It seems as though this is not a new issue.

It has always existed but the worse the country’s social situation and media situation is, the more garbage it is (and I call them garbage, without quotation marks).

And the only way to fight is to bring them into the legitimate field.

They should have a clear editorial office, employees who are socially responsible for their publications. Otherwise, when you want to print a denial on a website like this, it turns out that they have no address or phone number and cannot be caught in any way. This is the first issue.

And the second problem is the abundance of information and fake information in the open space of social networks, which creates artificial competition for professional media.

Unfortunately, today most of our society is interested in receiving so-called “fast food” information. This fast food is given on social networks, which then move to the media.

The media finds that fast food information is in greater demand than its serious economic or political analysis that often remains unnoticed.

Swearing, hate speech in social networks can be an excuse for long-standing debate and collecting a huge audience. Hate speech especially, which begins with the social sphere and then extends itself to the media field, becomes a problem of national security.

This is an issue of concern and a challenge for change in the Law on Mass Media.

Legislative solutions can be achieved if there is a consensus between the media field, the public and political forces.

In addition to sanctions, is it also possible to use stimulus or mechanisms of encouragement?

If the state encourages a media outlet, the news agency essentially becomes indebted to the authorities and no longer criticizes.

I think that the authorities should not interfere with the work of news media.

To not encourage nor interfere with its activities. And ethical rules, media literacy, different norms and codexes are tools that are not being used.

Are we insured from the restriction of freedom of speech?

We are now working with the Council of Europe in order to try to find the golden medium, which will regulate the media field but will not endanger the freedom of speech.

We still have not found the right formula for that golden medium, because trying to solve the problem with a legislative solution, we reach a delicate line when its settlement can lead to the restrictions of freedom of speech. I do not know how we will find those regulations.

At the previous parliament session, Arpine Hovhannisyan and I tried to introduce legislative initiatives, and by the way, the proposal came from the editors working in the media field, but during the first reading, the same editors, who suggested not to be tolerant towards non-professional, media outlets and websites born in the basement and which provide the public with fast food media, withdrew from the idea.

And when I, as chairman of the NA Standing Committee of Human Rights, was recently called upon by the media which said that we should discuss the issues in the committee, I said only in the case when the initiative comes from the media.

We will not initiate it, in order for it not to be said that we want to limit the freedom of speech through legislative means.

And why does the journalistic speech for the most part lack quality?

The reason is the gaps in journalists’ education. Today, we have a lack of professional journalists. Journalists who reach out to me on different issues do not have an elementary knowledge or awareness, do not differentiate one structure from another.

We have totally illiterate journalists.

It is clear that when you are a part of a political force, you are definitely identified with that force. The voice of the TV company that is identified with your party also lacks high quality.

If you are trying to tie the Prosperous Armenian Party with Kentron TV, I can also link Public TV with Nikol Pashinyan.

Everyone sees different connections according to their preferences.

But every media outlet decides its editorial freedom.

As for Kentron’s news broadcasts, I can say that it is one of the most professional programs that impart absolutely unbiased information and equally analyzes all political forces.

I want to ask a personal question. Doesn’t being part of a political party for many years violate impartiality?

There are regulatory committees that, if they see that there may be a conflict of interest, and who should raise the issue.  And they should do it over the course of years. They didn’t do anything because there has been no violation of objectivity.

And how likely are you to respond to the opinions of other political forces? As an example, when you hear that a member of your party is calling for the burning of homosexuals.

We are now talking about different things that have nothing to do with the media.

It just seems to me that party affiliation can sometimes hamper independent views.

Civicism does not hinder it, either a person is independent or not. As to Vardan Ghukasyan’s appeal, as far as I am aware, he has given an explanation that he made such an announcement in a moment of emotion. That is all.