For Me The Most Disgusting Word Is “Order” 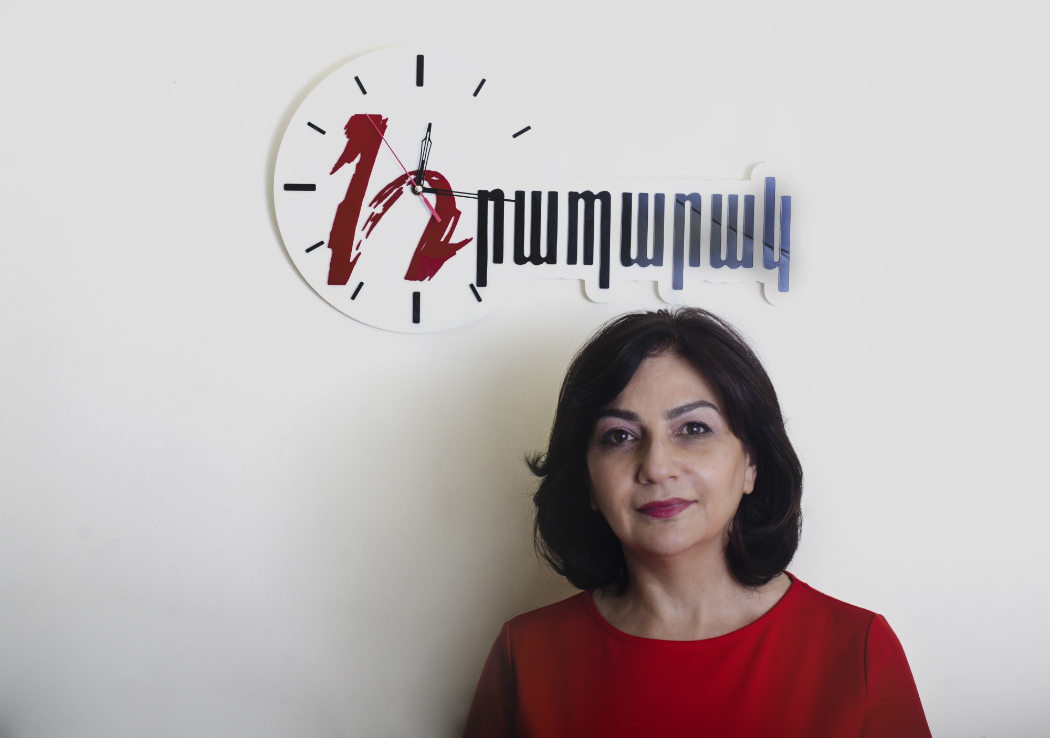 After the Velvet Revolution in May, the media is trying to recapture its own territory or their role that has been lost along the track. In all cases their classical role (both commercial and public) has undergone a certain transformation.

Hraparak daily newspaper, which has been working for the past decade to respond quickly to marginal, even between the lines news and pieces of gossip, turning them into selling products, now continues with the same tactics.

The editor-in-chief of the newspaper, Armine Ohanyan, is confident that they compliment the public demand. She says it does not intervene with the newspaper’s journalistic materials, or if it intervenes, it does so cautiously and gently, because journalists are subject who have different opinions.

The impression is that during the revolution, certain media outlets thought that it was also their achievement. And they continue to work that way now.

Yes, the revolution was also a result of years of journalistic work.

But our society is difficult to change and is inert, it has its own ideas and molds, which it cannot rid itself of quickly and reorient.

When the new power rose to government, the society continued to treat it as an opposition, and thus without realizing that the one who has power has a completely different status, responsibility and task than the power struggling in the street.

Fortunately, some journalists caught on very quickly. For example, we drew the line, saying that until May 8 we stood by the oppositional forces and the revolutionary society, and we would continue to do so after May 8.

In vertical power, small media outlets, small information leaks, scandals discovered in the corridors worked well as attempts to uncover information. There weren’t any deep investigations, but there was something superficial. Is that a matter of style?

There are problems and processes that we treat in the same way that we did years ago. I am a journalist, who has always worked in an oppositional, so-called free press. And my attitude does not change because my friend Nikol Pashinyan is the head of government and my son-in-law Alen Simonyan is a member of the National Assembly.

I continue my journalistic mission. I have always considered that in all countries, the press has one role, regardless of what changes in the country, who comes and who goes from power. This role is the role of a guard dog, sanitarian, finding weaknesses, pointing them out, voicing them aloud.

In the same style?

The press is not only for academic analyses, discoveries and investigations, but also writing about small scandals, incidents, rumors.

We have to live and work in harmony with society, we can’t stop those who are interested in, for example, what kind of relationships are within the Civil Treaty or how the board session has been conducted.

If we have such information, why not write about it? At the same time, we wrote about the disputes and fights during the RPA sessions.

Our attitude has not changed, only personas and names have changed.

The media should satisfy public interest in all aspects, see vulnerabilities, shortcomings, mistakes. Moreover, it will see the mistakes of those in power more than those in opposition.

For example, there are both revolutionaries and anti-revolutionaries in our office, everyone has their own viewpoint. The problem is how much we allow all of these points to be voiced. I do not agree with 70% of the materials and opinions printed in my newspaper, but I think our journalists have the right to bring their perspective to the newspaper.

You will not interfere, even in the case of the material structure, vocabulary or message benefiting from your editing it?

I am editing very cautiously, refusing only the obviously rejectable things. For example, I do not allow the use of the word “sectarian” because if there is freedom of religion and conscience, all religious organizations ought to be respected.

Is it the same for sexual minorities? I ask because we read fairly often about the dangers of homosexuals in Hraparak.

There is also a mixed group in society and no matter how much we want to define freedoms, the templates are still scattered in newspapers.

For example, we cannot ignore coverage of anti-LGBT protests, where different opinions are being voiced. And we give space for people who share those opinions in our newspaper.

Generally, I do not like when it’s said that editorial offices must create their own policies. It is necessary to give an opportunity to reflect the viewpoints of all strata and layers of society in some way.

You cannot cut yourself off from society. Of course, there is always the question of, am I really right, when when my opinion are imposed on others. But there is an explanation that the media is the mirror of society.

The media cannot be a participant or party. Now when we criticize a force, we unwittingly find ourselves in the field with the other force. For example, if we criticize Nikol Pashinyan, it turns out that we are pouring water into the Republican Party’s well.

There is always anxiety: How to to say things through a critical lense, without falling into the group of those who are looking at things through the lense of an enemy?

In the past, the Republican party hated us, there were shameless clashes, they spread terrible rumors about uts, threatened us and persecuted us. That is to say, everything happened to us during these years, even a period of assaults. There were actions taken against me personally.

But now the moment has passed, and those same people say, we have made a mistake, we realize that you did not take orders, rather were showing a journalistic attitude.

It’s a good thing that you used the word “order.” Is it not time to wipe the negative meaning from the word and turn it into a normal and open working model? After all, the term order does not mean to work wrong or produce something of poor quality.

This is the most disgusting word for me. Orders have no place in journalism.

And what do you consider the most worrying?

The most serious problem after the revolution is the psychological pressure that has been exercised on us. In our society, there is a layer, some of which are fake and some real people, but in the end we are faced with the pressure of revolutionary enthusiasts.

It is good that the euphoria was not long amongst journalists, they quickly snapped out of it and realized that they had to work and not become part of the government. Though some media did not understand it, which is a shame.

Among all the editorial offices our could have become propaganda machines for the government most of all, because my son-in-law is in the forefront positions and the Prime Minister is my grandson’s godfather. I have hundreds of friends and relatives who are on the new team. There were all the opportunities for me to go and stand by them, being more protected and relaxed. But I did not do that, as I have my ideas about the role of the press. It’s better to shut the newspaper down than to sed a minister say something foolish and not write about it.

If there is a topic to write about, I will write about it, without considering personal motivations.

We do not place anyone out of the field of criticism. I tell my reporters, wherever you hear something wrong, you will write about it without thinking about it for a second. Of course we are subjective, but we never target one while giving privileges to another.

Are sources for media finances are mostly shady?

Perhaps something like that could have been said years ago, but now, no. For example, we have 16 contracts with different advertising companies, and our cash flow is such that even at the end of the year we have a surplus.

It turns out that you have more ads than you need.

At this point, yes. We have income.

Of course, the news outlet that needs lustration ought to disclose its shadow economy, especially if it does not have ads, visitors or views. We have no such problem. We have ten employees and we do the most efficient work with the smallest group possible.

I think that stable media in Armenia can cover their expenses.