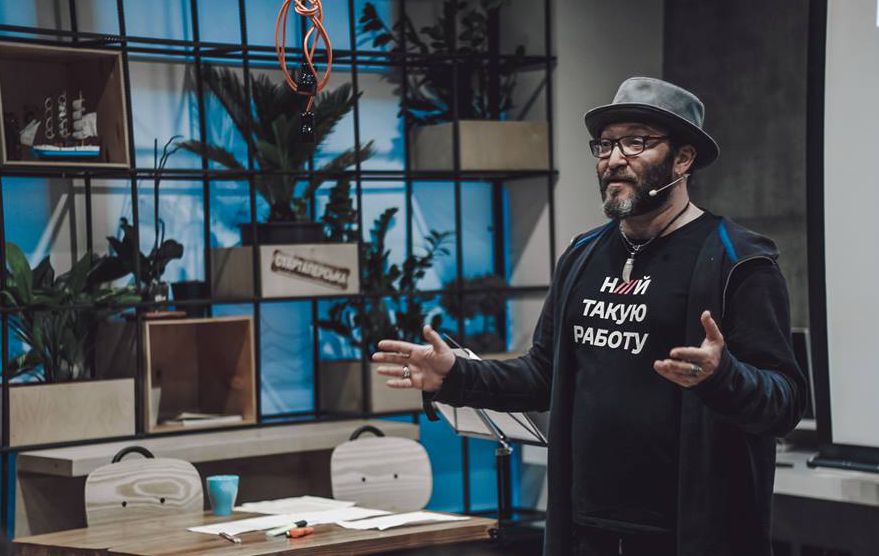 Journalist, music critic, actor, radio and television program producer, Mikhail Kozyrev is an important figure in Russia. Music, mainly rock, is his passion and the subject of his study.

Mikhail Kozyrev presented his collection of protest songs “Motherfucking Rock-n-roll” in Yerevan, within the framework of “We Are The Media” program on June 14. During his speech, he talked about the singers and musicians who have changed the feelings of states and societies over the past five decades (from John Lennon and Yoko Ono’s bedroom recordings to Sinéad O’Connor’s anti-church manifesto and Serj Tankian’s pacifist messages).

There were also satirical music videos from the Russian Dozhd TV channel included In the series of protest music, which created tension between the channel and the authorities.

Protest songs help to create cracks in hard core systems of power, and as a rule weak systems (totalitarian) cannot withstand these cracks, and are forced to change or silence the voice of protest.

Music changes the world, sometimes in unpredictable and unavoidable ways. That can be both a gift and a curse.

Thanks to Mikhail Kozyrev, many Russian rock musicians have gained an audience in their homeland. He has been a producer of several radio stations (Maximum, RadioUltra, Our Radio) and the founder of two major rock festivals (Maxidrom and Nashestvie).

Durin the Tvapatum Media Conference, Mikhail Kozyrev, who is also the producer and host at Dozhd Online TV, shared how Dozhd tried to be honest and operative media in difficult conditions.

“Our channel was born from dreams. For us, it was a dream’s media. We wanted to confront the terrible torrent of lies and absurdity that was in the Russian media field. In reality the goal was very clear, it was necessary to show what was happening outside the window, because, no matter how strange it seems, nobody in Russia did it,” he said.

For the first time in 2018, Dozhd showed live footage of the clash of football fans, when angry fans had closed the streets and the main Russian media, the TV, kept silent about it. In order to get a big audience, you simply had to go to the streets and create a direct connection from the scene.

Later, when Dozhd gained momentum, it gained an audience and reputation, problems began, persecution and deprivation of airtime.

“With a blink of an eye, they shut down our main cable broadcasting package. When our oxygen stopped, we began to broadcast from a one bedroom apartment and started to gain an audience again, this time online. Now, just like on the first day, we continue to show what is happening outside the window,” said Mikhail Kozyrev, who had also covered the Armenian Velvet Revolution through live broadcasts from its beginning, dangerous and unsure stages.

He is one of the first to have congratulated the success of the My Step movement on live broadcast. He also asked a question to a participant of the revolution, as to whether they are ready to resist the idea that the revolution as a rule devours its children.”

In Mikhail Kozyrev’s opinion, journalists need to find strength after the revolution and continue to ask questions. More serious questions.

Our conversation is about political humor and the profession of a journalist.

We are used to the fact that irony is a weapon of state propaganda. The other, the new, the different, and in general the person who strives for change is made fun of. Perhaps ridicule also plays a negative role.

Ridicule is the salvation of humankind, it allows for breath, so that you can look at this or that situation in a slightly lighter way.

Then it is simply a weapon, and the most important thing is whose hands it’s in. it can appear in the hands of an expert and talented person, but it can also appear in the arsenal of an incompetent and evil person.

Metamorphoses of humor, which are visible in Russia over the last two decades are quite sad. Any ridicule, satire, sarcasm towards social or political phenomena are practically dropped out of the public media space.

It’s very important to understand that, ultimately, everything in Russia, the atmosphere, the mentality, is determined by television.

It’s true that if you are in the TV box, then you exist, if you’re not on TV, then you don’t exist.

Wonderful, sharp comedian, TV host Mikhail Shats lost his job the moment he and his wife Tatyana Lazareva, supported the white ribbons movement. In a blink of an eye, they were kicked out of the TV channel where they were hosting comedic programs.

And it was a real tragedy. They were immediately erased from the the list of most demanded people, and disappeared from media space receivers.

A few months ago I was present at a stand up comedy competition and was simply astonished by the absolute spinelessness and sterility of the jokes.

The new generation of comedians’ work is based on their  craving to appear in the TV box. Since all of them have grown up with the humor of Comedy Club, they no longer understand what to laugh about. There is no topic to laugh about based on principle.

Mikhail Shats is preparing a new show called “Shats and Mat.” It’s a stunning, witty and twisted conversation between two people, where a lot of officials and oligarchs would demand the comedians to give a public apology for each joke. A person whose career has collapsed, is trying to rebuild it again, now in the stand up field.

Of course, he can’t be sure that he’ll have an audience, because people in Russia are  even afraid to laugh. This is the level of deadlock that we have reached.

Is humor necessary as an extension of journalism ?

Of course, the quality of humor is complex and abstract category. There are simply talented and untalented people.

But leaving place for humor and irony in the media field is the right, creative way for each person who doesn’t ignore the events happening around them.

At that moment, when a politician (even the one who is your favorite and who is loyal to your ideal) comes to power,  the first thing that needs to be done is write a satirical song about them and turn them into the subject of your stand up show.

It’s necessary that it’s understood that you are not sold or bought, that you aren’t going to suck p to them for as long as they are leading the country.

Your issue is the opposite, constantly poking them in the butt with needles. I think that that is the main mission of artists and creators, who are not indifferent to the future of the republic.

The same is true for Journalists, who should always and in every situation continue to give sharp and serious questions.

The new authorities in Armenia have a great resource of trust.

Especially after major revisions and revolutions journalists should never accept the reality on the premise of faith alone.

From the moment when Serzh Sargsyan’s seat was occupied by Nikol Pashinyan, he had to be the recipient of the questions and he had to provide the answers.

Journalists should put the government in an awkward position and demand the truth from them.

Otherwise, it will be like what happened in Russia. For 18 years, we have continued to witness sole leadership, when a person has managed to create a vacuum environment, where no one has the right to simply ask an uncomfortable question.

In your opinion, is the profession of journalism changing now, when the monopoly of broadcasting news belongs to everyone.

I think that the principles of journalism will never change anywhere. The only thing that’s changing is the role of journalism.

Now, journalists should take into consideration new methods for consuming information. After all, both the profession, the art of building information and their own talent is in their hands.

If the journalist is talented, they will try to establish and re-conquer their positions in the new circumstances. Let’s say, they will share their news agenda and dictate it. What I say is relevant to both Russian and Armenian journalists.

Otherwise, if they do not have any talent and principles, they should leave the profession with a clear conscience.

Though it is not easy to realize that, and it is even more difficult to leave your profession, but, eventually one day we all have to answer our children’s question, why are we doing what we do?

I assure you that children will be very cruel. And rightly so…