Making A Joke About Jesus Is Allowed, But Not About Nikol 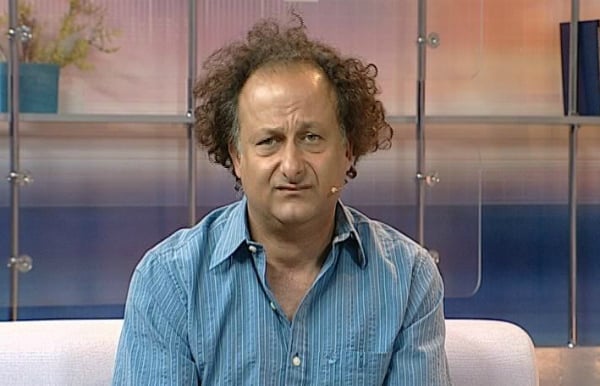 Sergey Danielyan is one of those actors, who uses his mask and his real face with passion, humor and pleasure. He is simultaneously raw material and product, and this is perhaps the best evaluation for a person who has chosen the best profession in the world.

Finally, being an actor is a little divine, simply as both the creator and the creation from the same flesh blood, emotions, nerves and brain.

Sergey Danielyan is a comedian, who builds his own roles (including texts that usually hit a little below the belt) and he isn’t afraid to be a fool. At first,  his only platform was the theater, where he gave stand up performances. Then his platform became the internet, where he would regularly “play” in different short programs.

“For stand up, you need to have a rich biography and have to be able to look at it from an outside perspective. The same is true for video blogs,” he says.

Sergey Danielyan was met on the web with open aggression, when after the Velvet Revolution, he began to do a series of Nikol Pashinyan impersonations.

The three post-revolutionary programs, shot in the effect of a live broadcast message, brought forward a surprising problem, humor was perceived as blasphemy.

Generally, a good actor is similar to a wind-catching device, with the help of which everything and everyone around them can become material, adding masks and new topics, colors, tints and tones.

Sergey Danielyan hunted the wind, which brought with it threats and curses and the most unpleasant and offensive comments, which he made public.

I think that the most difficult but the most grateful amplua is comedy, a clown. Is it complicated being a clown now?

This concept isn’t broken up into easy and difficult cups. Either you’re like this or you’re not. Maybe it can be called a clown. I understand that people have a negative attitude towards that word, but for me it is a great honor. I am and have always treated my work that way.

Yes, it is complicated, because you’re always found at, so to speak, the mouth of the gorge. Either this way or that way. It’s hard to find balance and that level where you don’t hurt yourself, but also that your word gets out.

There’s always the danger of getting hurt.

Both one and the other. Everything can happen, they can catch you, beat you, put you in jail. If we have compared me with clowns, then let’s not forget that in the middle ages, clowns were often beheaded. They said that this time your joke wasn’t good, and that’s it… they would cut off their heads.

The same goes now. Of course, they don’t behead me, but well…

The reaction to the comedic impressions was uncalled for, was that offensive?

Of course, it can leave an affect.

That is why I put the most dissatisfied comments on my Facebook wall, so they see how different people can be.

And it’s very interesting: People see them and begin to either fight with them or give a show of ignoring one another.

I think that if I don’t do it, then who will? Of course, in theory, all of us recognize that society is different, consisting of the working class, bourgeois, and other classes.

We have read about it in books, but it’s completely different when you see it.

That becomes very apparent, and you don’t say anything about it, rather they show it through their reactions. Of course, I also understand that people are not obliged to understand me.

There is no editing online, but it is assumed that there should be self-editing.

Of course, everything I say is self-edited and has a message. Only a complete idiot cannot understand the difference between what is a joke, what is meant to draw out a smile or a laugh, and a building message.

There are rules outside of Facebook, even face control, while online there are no rules, people can write whatever comment their heart desires, including the worst curses.

Even in the theater you have the choice to kick the person swearing out of the hall, while online you are completely open and defenseless.

What’s interesting is, when seeing me on the street, those same people who swear at me online, never say to my face that which they write on social media. The internet is an anonymous cover for them.

They look, they don’t like something they see, they give a reaction immediately, they don’t even give it a moment’s thought.

The reactions of single-celled animals are only two, to contract and loosen. When the organism receives any signal, it squeezes and contracts. Let’s say it cannot escape, grow larger, get smaller, change its color. Single-celled organisms are used to contracting.

After the wave of offenses, you deleted the video. Why?

I deleted it, took a break, gathered my thoughts and said, I’m going to do it and I don’t care what you do. And I do it, especially since posting and taking down materials became a PR step.

There is generally only one choice during tense situations, to do or not to do what you would during calm periods.

The topic of the debate is not as important as the style of the debate. When opening such debates, do you feel responsible for the results? Let’s say, what level of extremism and ugliness will the comments reach?

Yes, I am responsible, and that is the reason why I post the swears. That is my research step, which helps to understand who these so called Baroque Heroes are.

People’s hearts open up and lose themselves by running towards anyone.

The people worship the Prime Minister. It turns out that you can make a joke about Jesus, but not about Nikol.

The problem isn’t in trying to show how aggressive and unkind people are, as we will only suffer from that, rather to wait when they will finally feel that we live in a country of a different quality.

Garbage always comes to the surface of water, then after a time it reaches the ocean, becomes filtered and cleaned. Slowly, everything will be cleared.

Years ago, business was in the same situation, everyone began to open pharmacies, then gas stations…

Yes, and that’s normal. The spreading of elemental trends is natural, since eventually everything will be determined with time. Those who are in demand will remain, the rest will be left out of the field.

Does television have a future, or is the point of blossoming in the past, and now it’s buried?

We can’t say anything for sure. At one time, the same news of death was spread about theater. The end, cinema has come and theater is finished… But theater didn’t end, rather it went to another platform.

If at one time theater was the only place to have fun, where people with bread and cheese came from the villages to the center to watch what was being played for them, then now theater is a totally different place. Theater is not needed by anyone for fun anymore.

So, maybe TV can also find its new platform and continue to live.

I, for example, do not have a TV set at home. Honestly. Whatever I need to watch (including TV productions), I watch online. It’s so fast, easy and relaxed, since you choose when to watch what you find to be most important, without advertisements.

In fact, now you are on pause and there are no new projects?

Maybe there will be. All of my projects are spontaneous, they continue and stop whenever I want. The same took place with my series of fairy tales, which were created during the protests. Every broadcast began with the introduction “Once upon a time…,” and gathered a large audience.

These latest live broadcasts on Facebook, which were similar to the Prime Minister’s live broadcasts, didn’t even have a name. It was simply a series, which was conditionally called “Live Broadcast.”

Years ago you made great provocations by establishing a Civic Activists Step (KAK) party, which to the surprise of many, had a large number of followers and fans.

I created KAK because it was fun. Of course, that was a form of provocation, since my platform is satire, not the parliament. But thanks to that I gained a new audience and new topics.

It’s interesting that after the appearance of KAK, the opposition was more offended saying that Sergey Danielyan is disintegrating the votes of the opposition. I answered that if KAK with my irony is going to pulverize votes, then it’s better to just mock it.

But now I have a different reason to worry. The new government of Armenia treats me well, and to be honest, this worries me a bit.