“Media literacy is a vaccine” 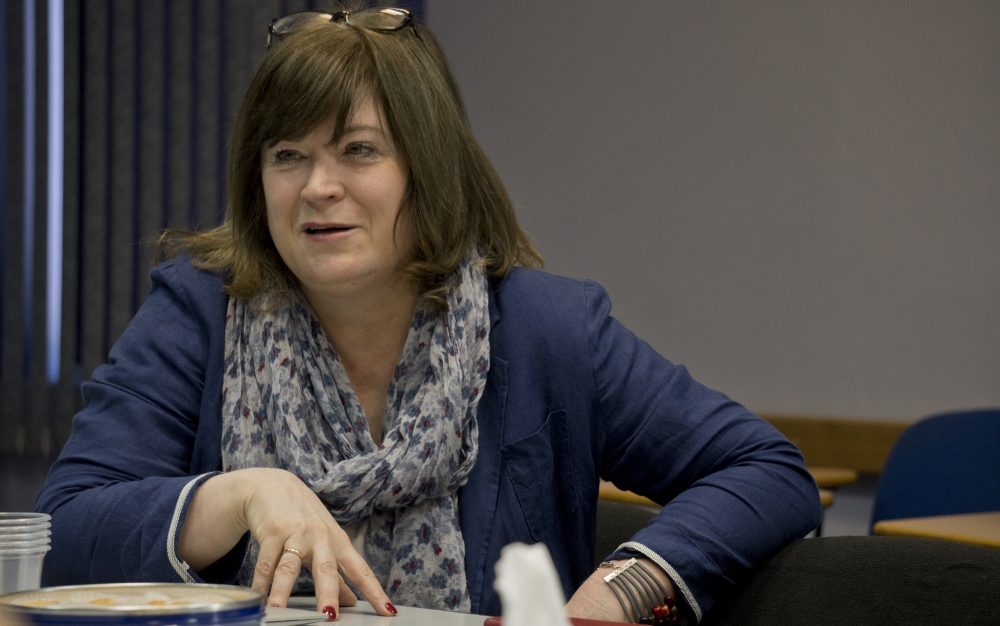 Media trust and demand are two of the most current issues. What you write is not important; what’s important is how you package and brand it. There can be an enormous semantic abyss between “what” and “how.” And in this information environment, to be able to orient yourself is most important. That is, to be media literate.

“Media literacy is integral to us. It is needed everywhere: from reading the news to watching a film, reading a book, visiting a museum, and generally just living,” says Anna Kachkayeva, a well-known media critic in Russia, journalist, and professor in the Faculty of Communications, Media and Design at Moscow’s National Research University Higher School of Economics.

Kachkayeva was in Yerevan upon the invitation of the Media Initiatives Center [also responsible for this site]. Meeting with journalists, she insisted that literacy is an important precondition for consuming media products. And it should be taught from childhood.

The media sector is an unfamiliar and potentially threatening reality, the analysis and decoding of which should be one of the stages of a child’s learning. Just as a parent teaches a child to be careful when getting on an elevator with strangers. After this comparison, Kachkayeva adds that the first step in calculating the dangers is always to doubt them.

Armenia is under the influence of Russia’s media sector (especially state propaganda). Can these dangers be calculated? And what is the purpose of that propaganda?

I can’t answer on behalf of the entire Russian propaganda because I have nothing to do with that. But of course, it affects post-Soviet countries, considering the traditions and habits of watching television.

In the last four years, all of Russia’s neighbors have become strained, since the level of aggression and the direction of inadmissible rhetoric (toward politicians, other countries, even peoples) is not only not alluring, but also often outside of the profession’s standards and ethical boundaries.

I understand my colleagues who react acutely to Russian mainstream media outlets’ content, but I assure you, there are media outlets in Russia that are trying to maintain the professional face and notions of journalism, without sowing hatred.

Of course for the majority of people, Russia is represented by the major TV channels, and not alternative online publications or radio stations.

But don’t be prepared for something terrible. In any case, this isn’t a war, and millions of people aren’t dying in the media sector. Though of course the health of minds and views is no less important.

I think in today’s communications environment we must be prepared to do one thing — cast doubt. This is the mandatory condition that we are persistently advancing when we discuss media literacy.

People must cast doubt to understand what the language of contemporary media represents.

In the modern world, the media is often used as a weapon, especially television, which has long been producing not news, but emotions.

Now, no longer meanings, but only emotions, which confirm the perceptions of someone’s life and easily affect the audience.

Propaganda wouldn’t be as influential if there weren’t inner human beliefs, inner traumas, problems and crisis situations. If a person is in harmony, no television will be able to change his format.

Maybe what’s getting in the way is the page of Soviet history not closing.

Soviet history has not been overcome. And Russia also relives that trauma, since it relies on the nostalgic desire that we’re always right, we’re big, we’re strong. And being right and strong must be shown to everyone, especially the Americans. After all, Americans are our eternal and ultimate target, I say, sparring partners (as in boxing).

We talk a lot about the fact that if there was no US or Ukraine, there would be no news in Russia, since Russia is practically non-existent in the main newsfeed.

Unfortunately, post-Soviet countries due to various circumstances (economics, language, religion, customs) have remained in the context of Russian influence. And of course those countries are under the pressure of major imperial television.

Ukraine, for example, has banned the broadcast of Russian channels; it also censors Russian films. But that’s not a solution.

Of course in today’s world of communications that’s not a solution. I can understand the Ukrainians: finding themselves in a state of aggression, they are trying to somehow block the information pipes. But that’s not a solution to the problem, since, all the same, people watch television through different means, for example, through the internet.

The solution requires political will, respect for your neighbors, an understanding that in the modern world, an aggressive talking style doesn’t help.

Probably Russia itself has to admit that it can be alluring due not only to the military truncheon, but also to culture and thought.

People’s wish to be more independent, critically thinking, and understanding on what the modern communication space is must be supported. The media language can be extremely different; consequently, it’s absolutely not necessary to believe everything.

We are forced to educate ourselves about critical autonomy. By the way, it’s a very natural requirement for the modern person. Just as we brush our teeth in the morning, teach children to read and write, so too we must learn and teach to orient ourselves in the modern media space.

The media has become almost animate; it’s a part of us, our continuation. The media is our extension, our lifestyle, especially for young people.

So let’s start living with the media as our continuation.

It’s interesting that when you talk about media literacy you use the word “virus.” Should the necessity to cast doubt spread like a virus?

A virus is different, as too is propaganda (the propaganda of a healthy lifestyle, for example, is good). The problem is what we include in the understanding of that word.

Ultimately, what is a vaccine? And how does it work?

A certain dose of a disease that is injected.