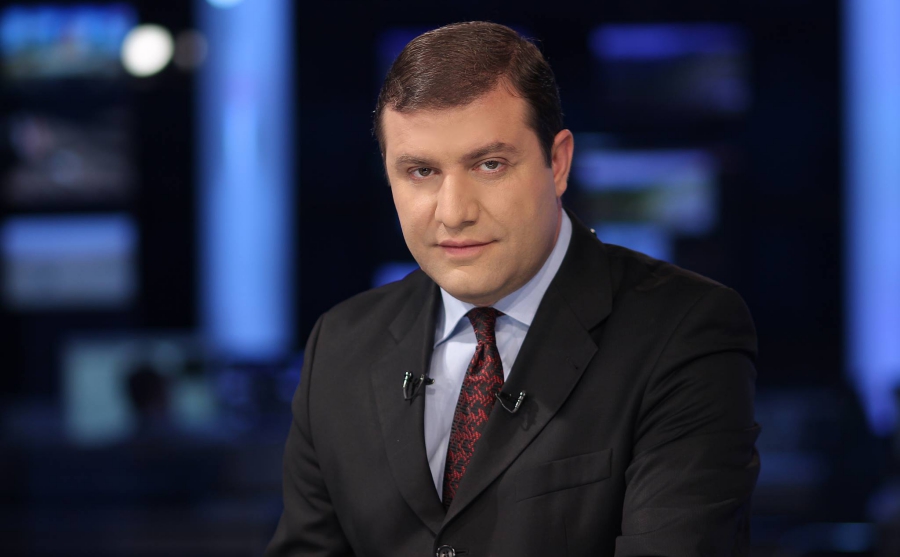 The news service of Armenia’s public television in recent months has changed the pace, style, and even structure of news programs of its news. The most visible change is “dumping” the texts of its news reportages. That is to say, the practice of hiding behind weighty and resonant remarks no longer applies.

Head and producer of Public TV of Armenia’s news programs Artak Herikyan describes these changes as a return to traditional television journalism.

This style of news delivery compels you to pay more attention to content (not immediately shut off the TV if you hear official or pitiful pronunciation). Generally, bare content presented without decorative words is perceived more acutely, or prompts reflection or at least a reminder that thinking is useful even when the content is fragmented.

Herikyan is one of those journalists who have their own countenance (also voice and image), and that countenance is not repulsive or discredited. An experienced journalist and TV host, he worked at the still emerging Public channel, then he was the director of Armenia TV’s Zham news program. He has also worked as First Channel’s resident correspondent in Europe (in Paris). Six months ago he returned to Public TV, now as coordinator of the news.

“My favorite job is being on the scene and telling the story, but it turned out that I’ve spoken more from the studio. In general, I always feared big roles, but now I believe that I can [assume them],” he says.

Herikyan believes that today, when television all over the world is losing its audience, TV news can be in demand — you just have to be honest and talk in a human voice.

Though honesty is that elusive substance, the lack of which we consumers have long become accustomed to, Herikyan is convinced that the audience’s trust can be regained.

What, first of all, did you change in the news?

We didn’t invent anything new; we just returned to the rules of traditional television. That is, we prepare 1.5- to 2-minute reportages, news with 30-second clips, interviews not more than 3–5 minutes in length, and commentary that is included in the programs and reportages. We added the weekly series Orakargits durs (Off the Agenda) and the Sunday program 360 Astijan (360 Degrees).

We’re taking the path of creating news in simple but not simplistic language and well-constructed scenes — also, with the professional selection of subjects and facts that resonate with the public.

Actually, we’re not doing anything big or drastic. We’ve come to reposition Public TV as a TV company that creates quality news content.

It’s a custom from the Soviet years that official news must be pushed to the forefront, but it’s not a sacred rule that all have to follow.

I’ve always been interested in why television news are always positive. Of course, I’m talking not about the reporting of disasters, deaths, and accidents, but about the reportages describing life. Is presenting news in a positive light an involuntary impulse?

Let’s be honest, that’s a stereotype. It’s a stereotype that only “cute” things are shown on television. Watch our news broadcasts and you’ll be convinced.

Our goal is to approach the online audience, which is more reflective, informed, active, and also politicized.

Being clamorous and hysterical is one thing; a sober newsfeed, completely another. We have a mature team, which doesn’t make an uproar for a tragedy and doesn’t rejoice and exult for a happy occasion, but tries to cast an honest glance on events. Perhaps that’s the reason that the stereotype that we only show reality in rose-colored glasses has solidified.

Yes, our journalists appearing on the scene don’t cry out and don’t make alarming remarks. We first of all tried to produce good, competitive news.

How would you characterize “good news”?

There are millions of components about which we talk about every day at our meetings. Beginning from language…

It seems our journalists themselves don’t know how they began to talk like officials, forgetting the human voice.

… and finishing with video. Often Armenian television forgets that its job is to show, and not to fill the heads of viewers with wordy stories. That is, the video frame needs to return to television so that news doesn’t become a radio program with images.

By and large, Public TV’s newsroom is Armenia’s first newsroom, where the most mature news team works. We now have journalists with 30 years’ work experience and journalists who aren’t yet 30 years old. This generational solidarity also helps to be more interesting and multilayered for the audience.

On the other hand, heralding that we’re going to create strong news content, we solidify our presence online. Our site is now operational. And judging from the number of views, we in some sense can compete with online TV. Soon we’ll also have our YouTube channel.

Don’t you think that televised life is sometimes not recognizable? It’s as though there aren’t unhygienic public transportation problems, the villagers’ despondent state, the gaps in education. It seems television news skims the surface, without going in depth.

Frankly, there’s no subject that our journalists won’t freely cover. It’s just our perspective that’s different. Please compare our news with some news sites’ screaming, flagrant headlines and emphasis. There’s no “shouldn’t” for us — we cover any subject, placing importance on what perspective and in what language it’s done.

TV news is experiencing a crisis all over the world; the internet has challenged them. But I’m sure that in the Age of Fake News, greatly increasing is the role of traditional journalism, that is, journalism that has been verified several times and doesn’t aspire to achieve a quick result at all costs.

Serious and reflective people watch TV during the day to combine the enormous flood of information, compress it, and understand it in half an hour.

Of course, television is always a race. Sometimes we barely manage to cover the day’s topics. And yes, following-up often lags behind: so to speak, being profound is hard particularly for a general, not-news TV channel. Of course, a 24-hour information channel has more opportunity and time to present the topics in more depth.

We ourselves understand that we don’t manage to follow up, since the paces forces you to think about the new day’s events. Yes, in its daily race, television doesn’t manage to get to a lot. 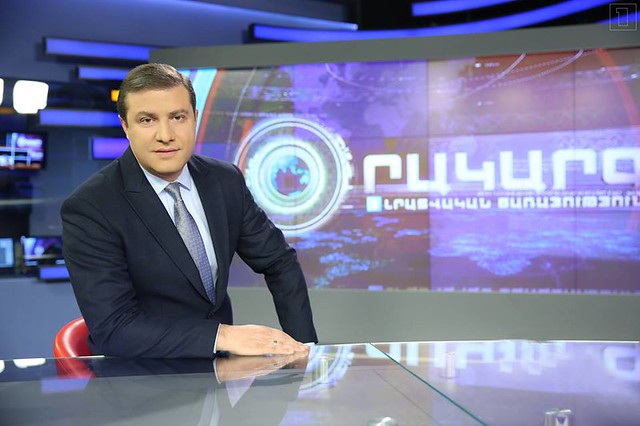 But the same also applies to news websites, which have more space and time to broadcast news. On which sites have you seen deeply examined and analyzed reportages or texts? They are very few.

360 Astijan has a fairly high viewership. Was it planned that way?

I put more effort in preparing our morning and afternoon broadcasts. Usually these have simply occupied the audience until the main broadcast goes on air. Now we want all the broadcasts to be full and equally strong.

The program 360 Astijan is still at the stage of searching for its format. That’s a program I stopped doing in 2008, and I’ve just resumed.

I think the program’s concept is successful: presenting the week’s events through people. People (perhaps I’m now saying something anti-journalistic) sometimes other than problems want to see human stories. And at the end of the week, as a summary of the information flood, they enjoy watching good stories.

And a good story does not at all rule out the severity of a problem. A story is good also with its structure and language.

We talk about language every day. That is, we try to avoid abstruse phrases and not blur anything. If we ourselves haven’t understood all the details of any text, we don’t air it just to have a record of it. Probably that’s the main change we’re striving for.

Today, young journalists from the universities come to us with the perception that a reportage is the same as a government statement, which must be presented with sympathetic pity or in strict academic language. In our newsroom now there’s a list of words that are simply prohibited. Beginning from, say, the expression “tears of love”…

In the newsroom, on almost an hourly basis, we talk about the quality of the text, shot, or editing, the purity of the language, and the dynamics. In Armenian television it was acceptable for there to be an up-to-13-minute reportage in a news broadcast. Now we want the sharp and comprehensive reportages to be watched smoothly. Light, but not flippant.

Around the world, television is struggling to get out of crisis and to stand strongly on its two feet. We’re also doing the same.

A few years ago, it became clear that television moved toward rejuvenation. There was the opinion that an older person is not considered beautiful in a frame.

I absolutely do not agree. My profession is like wine: the older, the better. A mature view doesn’t appear just like that; to be restrained and balanced, time is necessary.

When we came to Public TV, we didn’t declare that we’re sweeping the old and building anew.

In general, Armenian television has a serious problem: the link between generations, it seems, always becomes broken. I myself came on air for the first time at age 18 — at the time the goal was to immediately replace old hosts with the new. But when you start working so young, you don’t have time to master the necessary skills.

In your opinion, are so many terrestrial TV channels in such demand?

Today, neither Armenia’s economy nor its population has the need for so many channels, since both consumers of TV products and the professionals that create those TV products are few.

It’s like the time when there were so many gas stations in Yerevan. It seems to me this is the same phenomenon. In my opinion, there’s the opportunity, money, and demand to sustain barely three good channels in Armenia today.

Recently BBC conducted a survey and determined that young audiences in particular place importance on useful journalism. The audience expects from television and from journalists in general the way out of the problems it raised.

The news is a public service like, for example, public transportation. That is, the viewer needs the news to decide what he’s going to do the next day: what part of the city should he be wary of, what food to eat, what education to receive, and what health program to access.

That’s what’s needed, not protocol information, which is emptied before the audience in overly official language.

During the Soviet times, journalism was mainly propaganda; and we’re not fully exempt from that now. Now it seems we’re rediscovering television journalism and by fate, right at the moment when traditional journalism is experiencing its bad days.