“Election campaign is akin to the monologues of various political groups” 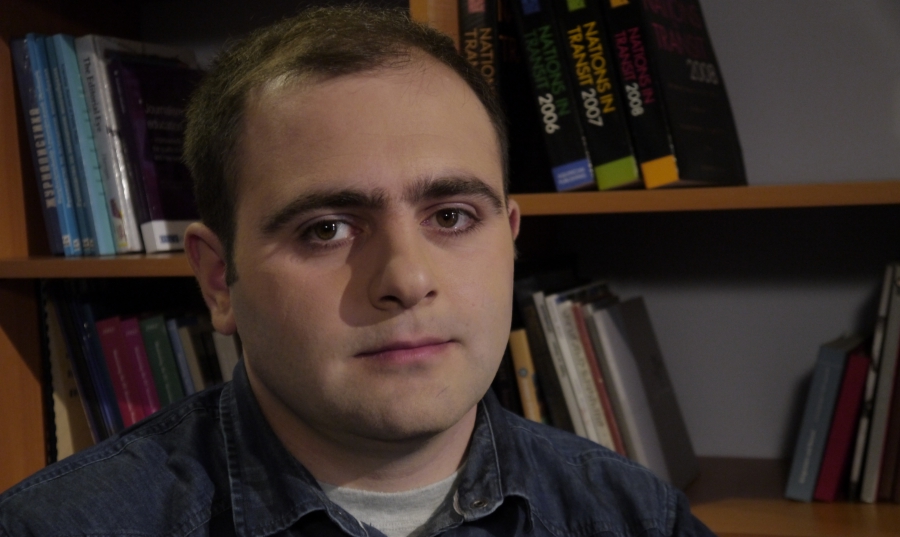 Analyst Levon Margaryan attempts to view political developments from a philosophical lens. The April 2 parliamentary elections are an opportunity to talk about the culture of voting and using the media as an indicator.

Living in a hybrid system (if we have to, we’re liberal; if we have to, authoritarian), we are now witnessing an election campaign taking place in a climate of an open and balanced media but a lack of political debates.

We’re at the stage now where there are active media campaigns and attempts to prepare for the April 2 elections. It seems everything is happening in a calm, peaceful manner.

These elections seem quite boring; there are no debates or competition. The reason perhaps is that the methodology of the electoral system has changed: the burden is on highly ranked candidates, while candidates on the proportional list are simply their backdrop. When the parliamentary mandate in Armenia became paramount, the candidates increased, and deciding among more than a thousand candidates became complicated.

If in the past there were two or three candidates at each electoral district, and it was easy to compete (either me or you), now there can be 120. And when the electorate is divided among a large number of candidates, the actual political activities occur not in the media (including Facebook and other social media sites), but in the parties’ headquarters, where people look at lists and decide how many voters they can ensure for their candidate.

And the ruling authorities, it seems, don’t feel the need to get into a fight with the opposition.

At this moment, the media can act as an effective tool for the opposition, which, unlike the ruling authorities, has no other resources. For instance, it doesn’t offer election bribes.

And since there’s no vividly pronounced confrontation, we’re witnessing not a dialogue, but various small monologues. Political groups are neither debating nor counteracting one other.

I get the impression that they’re even complementing each another…

At any rate, they’re not criticizing each other; rather, they’re pretending that they don’t notice. Each political group is busy gathering the minimum percentage [of votes] it requires, which has now significantly decreased. If previously you needed to gather about 50,000 votes, now you can become a parliamentarian with just 10,000 votes.

It seems there’s activity in the media: all the political groups and almost all the candidates have opened Facebook pages, but that’s just a backdrop. Especially when people who’ve never used social media in their lives are opening pages, and now they’re trying to create a pretty picture, so that the OSCE/ODIHR monitoring will note that they’re actively involved in political activity.

Social media activity has nothing to do with the actual election process.

We have more than a thousand candidates, and just as many Facebook pages, posters, messages, and so on. And we don’t actually see them because in that amount they’re not visible.

Watching the election campaign slot on public TV, we notice the balanced and neutral (even good) emphases. Is everything fine?

It seems we’ve entered the campaign period with rules of the game that have already been clarified, agreed upon, and accepted by everyone. The ruling authorities proposed an agenda, and the other political groups with tacit agreement settled into that agenda.

This doesn’t mean that the agreement is direct. To understand it, it’s enough to follow the media, which helps to see the reality without conspiracy theories. We don’t know whether the political groups met or not, or the sort of financial turnover among them, but we see what’s happening through the media.

All the media outlets are open. The public TV channel is producing on average three-minute, objective, well-edited positive reportages on all nine of the political groups. Of course, we remember the position that channel held in 2008. Now things have changed.

Ultimately, everything is based on a political decision, and the decision now is to create an image of civilized elections. And if the opposition political groups have entered the fight, that’s how they should be positioned. The media at least gives them that opportunity.

Media outlets are in the monitoring stage, and they’re trying to be more alert and careful.

The media outlets are going to try to report on everyone equally (and more so — the ruling authorities even less).

In fact, these elections are like a very good and beautiful game for those outside. OSCE/ODIHR will be going to the polling stations only on election day; on the other days, it will follow the media, monitoring public television and a few other media outlets. We see that everyone has equal opportunity to talk on air and spontaneous incidents are ruled out. If there really was confrontation, public television wouldn’t show it. This also proves that the media is an indicator.

Can we expect to see heightened debates, political texts, or clashes on television, or will everything proceed peacefully?

Recently political groups presented their economic plans to journalists. And it turned out that there was no debate or discussion; even the journalists failed to incite that. Basically, the only person that had a sound plan was Hrant Bagratyan (from Free Democrats), but we didn’t see whether the points of his plan were right or wrong, since no one countered him.

Only one journalist attempted a debate, which resulted in a slight conflict felt during the Q&A. The remaining political groups tried to pretend not to hear the plan.

In the rest of the plans, you can hear only general remarks: they’re preparing to raise pensions, eliminate the bad things. But those are toasts and well wishes, and not economic plans. The ruling authorities don’t even respond to these.

And so, we will have texts, but dialogue, no. Nine political groups are going to monologue, and we won’t even get aesthetic pleasure from listening to them.

Signs of a debate emerge when members of the Armenian National Congress–People’s Party of Armenia (HAK-PPA) alliance on various TV talk shows talk about the Karabakh issue. In that case, all the other political groups are debating with HAK-PPA.

But in all other cases, the conversation enters the realm of ethics (“not an inch of land,” “Armenian blood,” and so on), and politics disappears.

I think, apart from discussion on the Karabakh issue, we won’t see any other heightened discussion. If there’s going to be 120 candidates at electoral districts, they won’t debate. Many believe that the debates are ineffective; they’re going to try to find their electorate and work with them.

When opposition groups are competing with each other, there is a lack of drama. If the conflict was with the Republican Party of Armenia (HHK), we would think that change is possible, but the question of how many votes one small group is going to take from another small group is not that interesting.

If there was anti-campaigning or dirtier campaigning, escalating against each other, it would testify to the political process. Ultimately, if opposition groups are being pressured, then they feel threatened. But the threat is not apparent now because the center of power is somewhere else.

In fact, this is best reflected in the media. No matter how controlled and corrupt the media is, it nevertheless continues to remain the most transparent tool. Even by studying the most extremely controlled media, we can conclude, filter, assume.

The media is a great indicator, which helps us understand the reality through texts, distribution, and social media pages.

Yes, no discussion is happening now, and nothing suggests that there will be.

Is waiting for opposition forces to unite an illusion? At least in the future.

All over the world, liberal forces are more capricious and difficult to unite, unlike ruling conservative forces, which have a main purpose: to preserve their private property. For them, staying in politics is a personal issue, not an ideology.

The opposition doesn’t have large personal capital, the ideological layer isn’t completely established, and because they haven’t experienced the culture of fighting, it’s hard for them to make compromises. For them, politics is more so an aesthetic or ethical arena, which makes their consolidating difficult. For this reason we now have opposition forces performing different functions.

States like Armenia that have a totalitarian past have very clear ideas about politics. Our type of societies’ election foundations are built on black-and-white. People vote in the elections when they see this black-white contrast, and choose their perceived white. In all other cases, they get confused.

Now that option for choice has been removed for the public, making the parliament the primary mandate and introducing ratings, which are specific to more developed countries.

Journalists are digging up and revealing facts, alerting the public, but their investigations are not affecting the situation. For example, the ‘offshore scandal’ didn’t interfere with Mihran Poghosyan seeking a parliamentarian mandate.

The public accountability factor doesn’t work in Armenia. For example, during Electric Yerevan, [former education minister] Armen Ashotyan was seriously insulted, and everyone assumed that because of that his political weight would drop drastically. But, in fact, inside the ruling authority structures his weight only increased, since from the ruling authorities’ perspective, being denounced by the public is not important. What’s important is being loyal to their closed circle and taking a blow.

Mihran Poghosyan was dismissed from his post not because of the corruption scandal revealed by Hetq, but for deviating from the general order. Former prime minister Tigran Sargsyan was immersed in an even more serious chain of corruption, but this fact in no way affected his fate, remaining an internal issue.

Actually, the ruling authorities don’t consider the public their client and employer. To be honest, even the public doesn’t perceive corruption to be criticized. Put in colloquial language: eat, but don’t forget us too.

Mihran Poghosyan was probably criticized more for including the mothers of deceased soldiers in his election campaign than for his corruption scandal. That is to say, the ethical factor worked more. The average Armenian’s ideas about politics are based more on ethics than on citizen-state relations.