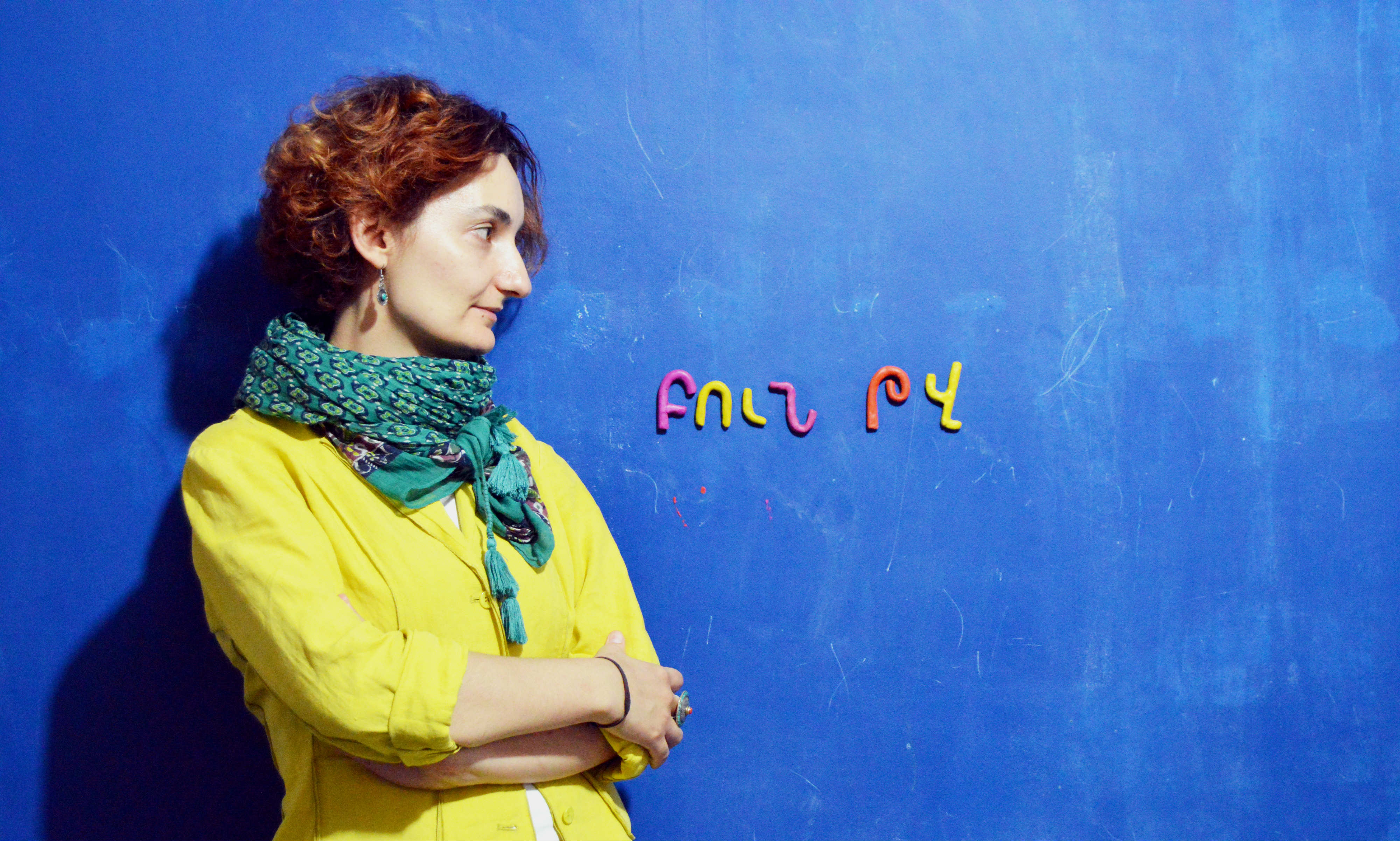 Boon online TV has a unique format. In Armenia’s media sector, it stands out by its clear targeted audience and choice of topics that aren’t opportunistic. Visiting this platform are people who want to hear alternative professional conversation.

Boon TV’s founders are individuals — Kristine Armenakyan and Gemafin Gasparyan — who with their personal financial investments have been able to slightly shift the stereotype that in Armenia today, no thought is generated, or when it is, it hopelessly dissipates.

Though Boon TV is only a platform that transmits speech, it simultaneously is taciturn. It’s taciturn because it’s specific. It’s become acceptable today to speak from media platforms about everything and little by little, touching the surfaces of topics. Armenakyan says that Boon TV tries to distance itself from that aimless and, by and large, questionable approach.

In today’s split, fragmented and rapid reality, Boon TV offers series of lengthy and in visual terms uninteresting videos that are outside the situational format and are designed for leisurely viewing. Weren’t you worried that there wouldn’t be a demand for these videos?

To be honest, we have that fear now too. But when the speed of information exchange has reached hysteria, analytical, slowly viewed professional remarks that leave a lasting imprint becomes an alternative.

We see what topics are important from media outlets and social networking sites. Everyone writes about the same thing, but I’m not prepared to read the one-thousand-and-eightieth opinion on the same thing.

Even the most important topic, repeated often, is devalued and turns into trash.

I think that constantly covering the same topics is the wrong tactic. It’s preferable to bring forth new topics and new conversations.

If we constantly complain and grumble when we consume information, we, after all, can offer alternatives ourselves. I’m convinced that the best form of criticism is to offer something more viable.

And in general, transitioning from consumer to creator is a serious act of resistance.

You don’t have a journalistic approach and intervention: is this on principle?

For us, the journalist is always absent.

It sometimes seems to me that journalists use the interview format as an influential backdrop for themselves. They invite someone on air and try to become established on their account. It’s not always that a journalist has something to say in all areas; you can allow experts to speak, after all, without “devouring” their precious airtime.

We want to be outside of media rules. In many cases, we don’t even see what the other media platforms are doing; rather, we consistently advance our own line.

We see that our videos, topics, and ultimately photos are taken and circulate online without attribution. Actually, we’re happy, since that’s one of the our ways of distribution.

What is paramount: the topic or the person?

It seems the non-commercial wave is not accountable to anyone, it shouldn’t have any restrictions in choosing content, but the choice of content presented at Boon TV is a self-limiting choice. If you task yourself with presenting certain academic, professional speech, which is a part of today’s global academic thought, you begin to deal with the dearth of the studied subjects and insufficiently qualified experts.

With time comes the cold realization that you’re dealing with a quickly exhaustible resource. And if in the past, in the videos, topics were paramount, now we often choose and construct the topic based on the existence of experts.

If the talk is about, say, biology, do you check its accuracy? Ultimately, it’s possible that speakers say disputable or incorrect things.

Usually the people we have as guests then become our experts with whom we’re constantly in contact. We don’t make arbitrary decisions: we consult with “gurus” from different areas and accept their referrals when seeking other experts in their sector.

What is most dangerous is pseudoscience, which must be avoided at all costs. There’s also something very surprising: when you see someone for the first time you understand how much they’re absorbed in their work, how enthusiastic they are.

Is enthusiasm a measure of professionalism?

To a certain extent, yes, since it shows that a person is informed of modern academic thought and knows what’s happening in their field today, and is not satisfied with fossilized and outdated knowledge, which they mastered a long time ago. Enthusiasm is the same as interest, the desire always to find yourself within science and to move along with the world.

I see that many of our guests get pleasure from their remarks, since they know to whom they’re directing them. Many use the material during lectures. I, for example, would’ve been happy if such a project existed during my student years; I definitely would’ve consumed it.

In general, credible are those initiatives that were created out of a personal need.

Graduating from the Yerevan State University, I never lost that bitter feeling of ignorance, and personally I’ve always felt a dire need to have and use Boon TV.

Boon TV is a an interesting archival place. Even if you don’t watch all the videos, all the same, you know that when necessary, you can hear serious talks here. Is the idea of the archive important to you?

I confess, there are times when during filming I clearly understand that we’re doing something very important now for later. The accumulated knowledge cannot be an end in itself, it must be conveyed. For the future researcher, Boon TV can be a rich repository documenting the thought of our time.

I think our work originated also from the professional field’s laziness. After all, video lectures are also unwritten books or articles. Our work is like a handbook, which could’ve been written but the author didn’t find the time or the opportunity to create it.

And now this message is preserved through video. We try to be consistent, and if we upload material, we always request a reading list and links from the author, which, if desired, will help readers do their own research. A 20-minute talk is bait that takes you to a wide world of thought.

Are there times when you refuse guests?

Of course there are, but over time, we’ve learned to reject beautifully. Fortune tellers and astrologists are quite active in this matter. But this is what we’re running away from, like fire. There were instances when we didn’t upload the video on the website because we understood that the quality of the speech is much lower than the site in general. Of course it’s also a shortcoming of our work that such people have by chance appeared to us.

Maybe this is censorship, but it’s hard to tell what the boundary is, which after crossing, the platform may be disqualified and destroyed at our hand. We want to become a reliable resource, for visitors to see that we’re not led by the randomness of the time, but that we provide refined information that’s gone through different levels of filtering.

Now, for example, we’ve begun a series on Islamic studies and we’re looking for a religion scholar or theologian who can present the core of Christianity from a neutral, professional position, which will be very far from preaching; I don’t know, we haven’t found them yet.

You offer not purely consumed but thought-provoking videos. At all times, the mind is the mightiest tool: if it moves from its place, it raises rather uncomfortable questions.

Thought is “dangerous”. But I think this “danger” is not yet well understood. In any case, we work very freely now, without any obstacles. It’s clearer than clear that thinkers are a serious problem for any government, and it was Boon TV’s most important goal to become a place where these types of people would have an opportunity to exchange ideas. It’s now the next stage; we must strive to spread as much as possible, involving more and more new layers of society.

The restlessness of the mind must become infectious.

There’s the impression that compared to channels with broad coverage, Boon TV creates a parallel reality.

It seems to me that our consumers are those who turn on the TV only as a big screen, to watch movies or football.

In Armenia, there’s a large segment of people who have alternative views but have no place in big media platforms. Moreover, their remarks are more necessary and relevant today than what the major TV stations fill our heads with day and night. People who have decided to never appear on those TV channels or who are escaping them come to us.

In your videos, the camera is static and, by and large, secondary, since the speech can be listened to without the image.

As per the audience’s request, we’re going to upload the audio version of the conversations on the website so that it will be easier to listen in the car or while doing housework, or even when you don’t want to do anything but you want some useful thing, in any case, to happen to you.

Do you think the decision to invest your personal money was justified? Usually, as a women’s business, in Armenia it’s acceptable to open a beauty salon. Media was a novelty.

By the way, I would be very proud if the woman dying hair in a beauty salon also avails of the audio section of our website. I’m grateful that my husband thought differently (perhaps also my enthusiasm was very persuasive in this matter), that he decided to invest, not thinking about making a profit. I’m happy that I have a partner like Gemafin Gasparyan, who is the person in the world with the least despair. We have an amazing team.

Later, we also had colleagues who joined us, seeing that we’re trying to maintain quality, and there’s a threshold which we won’t allow ourselves to go below. But most of all I’m grateful for the people who came as our guests, absolutely not knowing where they’ve come. They’re the ones who created Boon TV — with the quality of their remarks, their attitude toward work. And they did that free of charge and without fear that what they did would be distorted.

They probably concluded that, in the end, we’re doing the same work.