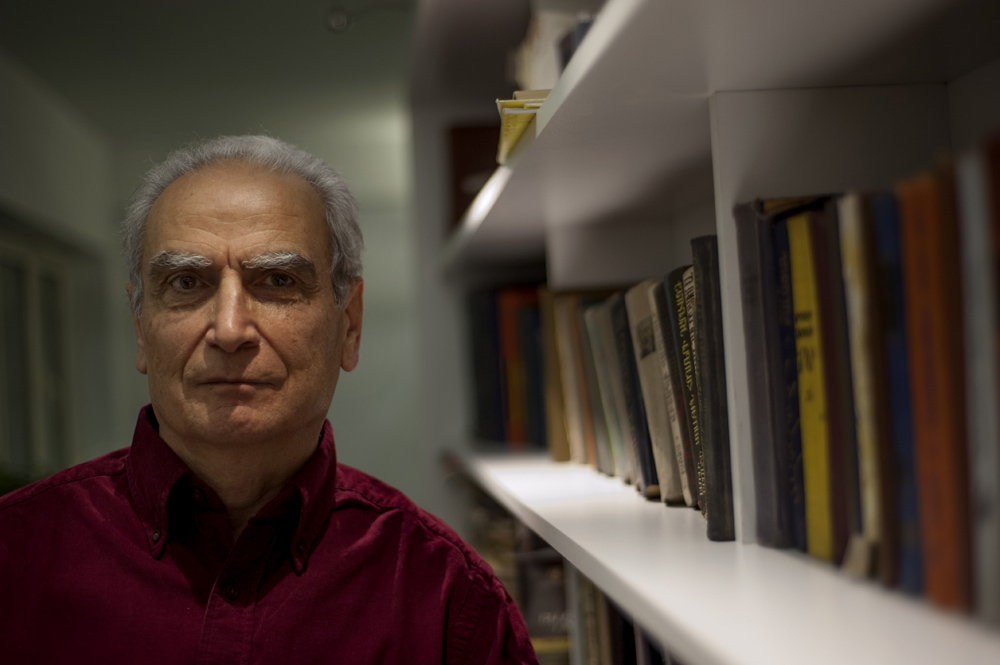 French-Armenian writer, poet, and literary critic Grigor Pltian is one of those people who create a dense cultural atmosphere around them. Literature, and speech in general, for Pltian is the tool that helps to break hardened molds and take an adventurous journey through texts and thoughts.

He seems to invite his interlocutors and readers to deconstruct texts (especially those that already have become classical) and embed them in the present.

Pltian is a philosopher by education and a firm supporter of the avant-garde. His novels and essays emphasize the need for reinterpretation, which allows not to oust the new and unusual, but try to digest them and use them as a key to bring the past to present-day. Ultimately, if you interpret the rigid and the classical, it ceases to be a holy shrine and museum relic, becoming instead an occasion for new ideas.

In Yerevan, Pltian presented his collection What You Do Not See, as well as his 1974 architectural poem, which was visualized on the wall of The Loft as an interactive text. “The Wall Poem” written 40 years ago is a specimen of fragmented reality , which also requires a new type of reading and reader. Every piece works automatically but at the same time interacts with the others.

“I don’t want my poems to be about love or war. Let them not be ‘about’ at all. I want the words and the lines to go to war or love each other; that is, to clash, to enter into a relationship,” he says. And adds that writing poetry requires mathematical calculations and not inspiration or a muse, since writing is intellectual work and must be calculated.

In our modern networked and internet reality, texts remaining invisible or being highlighted depends on a strange pattern. In Pltian’s opinion, in blogs there are more cookie-cutters than real freedom.

Social media and networking sites prompt everyone to publish texts on a daily basis (through status updates, comments, etc.). Words have increased; therefore, writers have also increased. In your opinion, has the internet changed the role of speech, as well the role of the writer?

I think that if a person is literate, that is, they know how to write, they are free to write what they want. Writing is one of man’s freedoms, and no one can tell him he shouldn’t write. In this way, the desire to express yourself, to write in society is irreplaceable because through blogs people can interact with each other more immediately and directly than they would in literary journals.

But in literary journals usually there are prohibiting bodies: proofreaders, editors, and so on. There’s nothing prohibiting you on the internet.

On the internet, the language becomes less developed and more direct because everyone writes as they want. There are no rules. It can even be said that the freedom of the internet allows people to never take into consideration literary traditions or grasps. But when we read blog posts, we see sometimes they’re full of cliches.

There are many cliches especially on the internet itself, since it seems many writers are discovering literature for the first time. That is to say, they think that literature begins with them and therefore, they present to us very naive stories and situations, which are already previously very familiar from literature. Online and especially on blogs, there’s a lot of unconscious repetition.

There’s also the reaction of friends and family, who write below their friend’s post it’s “superb,” “magnificent.” They are people who aren’t necessarily well versed in literature or have read a lot; they’re more so responding directly.

An enormous amount of the text that we read every day are also journalists’ articles. In your opinion, do media and literature enter each other’s realms or do they remain separate?

Journalists have their clear role in the media, but blogs are a separate reality. Blogs don’t even need journalists, since they can insert anything they want. But journalists can’t act like that. I too was once a journalist, and I know very well what conflicts arise.

Journalists, in any case, have to prepare their work, gather information, and for an interview, not only develop the questions, but also know what work their interviewee has done.

I think journalists now are not as concerned with things like this; rather, they wait for the interviewee to present themselves. And especially present themselves well. But consider that writers don’t necessarily have to be good speakers for one simple explanation: a writer is usually silent. For this reason they may say the wrong things about their creative work. But saying the right things is the job of the journalist.

The journalist himself must present both the writer and their work and the reality. And in that case, the presentation will be better than if the writer did it.

Recently we interviewed Peter Balakian, who said that he wants to open and expand his poems’ space so much that they enter the rhythm of life, engulf life. You, it seems, are trying to compress and condense text, getting rid of superfluities.

The internet, computer system is such that we can write texts for pages on end. Just like a river. And that stream will take us. The writer simply can’t possess their writing. And his writing style becomes distorted.

Due to new technologies, you can introduce everything into your writing; thus, your writing will become something like an encyclopedia. Or an uncontrollable flow of thoughts.

Meanwhile, what’s important in text is synthesis. You have to be able to combine, collecting what is most necessary.

All the same, you won’t be able to say everything.

And so, choose what you want to say. I think writing succinctly or, more accurately, compactly is much more difficult than writing at length. In any case, it’s hard to cut and remove the superfluities.

That’s the hardest thing for a journalist.

In general, the world of letters is a limited world. And it really does have to be limited, not because we can’t say everything with writing. We can… but should we? Do we have to say everything?

I said that a writer is silent. That is, there have to be places in the writing where there is silence.

You said that poetry is not a state of mind, but rather, intellectual work. Do emotions interfere with the mind?

I think that emotion interferes or has diminished; emotion just can’t find a good expression.

To write emotions doesn’t mean to write about them, but to write in a way that the reader notices how you are: sad? happy? confused? angry?

When Vahan Teryan wanted to talk about sadness, he would title his poem “Sadness” and continue, “A kite passed…” We don’t understand what the kite symbolizes, but we see that Teryan didn’t describe sadness, but he has introduced the feeling of sadness in his visual system.

In our times now, people love to talk about “things” (war, love, I don’t know what else), which of course is easier. Besides, the means of communication have somewhat simplified the circulation of topics. Going around international topics, they reach almost everywhere.

Consequently, the question of personality will decrease because emotions is a personal thing that belongs to our body and can never be transferred to another person in the same way.

But thought can be societal. Thought is subject to exchange, but emotions, no. You can create the same thought for another person, but you can’t create the same emotion. You know, people want to live themselves, feel for themselves, and not get prepared emotions [from someone else].

I ask because during the April War, writing was very difficult. Emotions didn’t permit writing soberingly and measured, but we couldn’t not write because we had to write.

When the news event is close to us, it’s very hard to appropriate it because the emotions are so great that the mind retreats. Time is needed for the mind to be able to control us and to get a more balanced situation.

I too was following the four-day war day by day, and I have to say that my emotions ran so high that I wasn’t able to write even in my diary, which I’ve never stopped doing. I had the impression that all this already happened with us and wasn’t new at all. But at the same time, it was extremely new. And so, how to treat all this? Of course, for the journalist it is a serious matter,  to verify the accuracy of the information, and also especially while describing the horrible situations. Being silent is also hard.

One of the ways is to describe without getting too close to the incident, leaving the reader not to read, but to guess some things. But that also can’t last long, since guesses are sometimes dangerous. In such situations, we first of all want it to be accurate.

In such circumstances, the journalist, writer, or survivor are forced to be accurate and moderate; they especially need to not add imaginary things to the text.

Since 1915, we’ve known these problems. The most severe situations generally have to be written about very restrained and balanced.

Yes, I scan the local Armenian websites almost every day. Let me put it this way: you can come across anything you want. And you have to choose. I’m not a passive reader: I read one thing, then absolutely another, trying to form my own idea.

You have to choose and try not to be carried away by fictions, especially by lies.