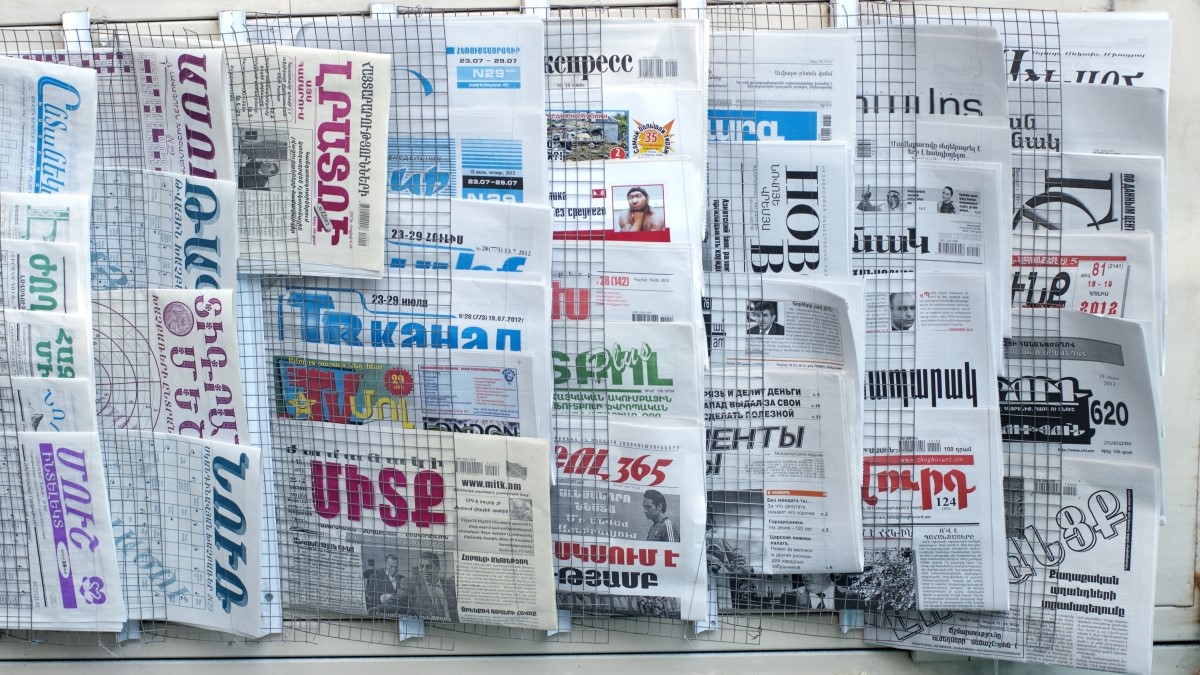 Our interviewee in this segment is Golos Armenii chief editor Flora Nakhshkaryan.

“Something else is killing us and not the small circulation”

Golos Armenii triweekly
Founded in 1991.
Circulation: 3,500 (fluctuates)
Printing: black and white, 8 pages (A2 format).
Price: 150 AMD (about $0.30 USD)
Revenue sources: subscription and newsstand sales, “informational companions”
Online version since 2000.
Once a month, releases the popular free-of-charge science newspaper Most, which is a joint project of Golos Armenii and Armenia’s National Academy of Sciences.

Is Golos’ main source of revenue newsstand sales, or…?

Please, let’s not discuss revenues. It’s pointless. If we were able to close our financial gaps, to break even, we would be happy with that.

What’s an informational companion, which you mentioned as a source of revenue? Is it a sponsor?

No, it’s not a sponsor. We sign long-term contracts to report on activities related to a given legal entity. For example, once every two weeks we put out a culture issue, in which there are problematic questions, different views. Here our informational companion is the Ministry of Culture.

Can that informational companion be from political circles?

We strive not to sign contracts with political institutions. We’ve covered education issues at length; we deal with the Ministry of Diaspora in some issues. To date, we’ve focused our attention on issues of science, particularly in our Most supplement.

We give fundamental importance to these topics in the context of the development of our statehood and try to rivet the public’s and the authorities’ attention on them.

We also cover real economic issues. With Armenia’s Ministry of Economy and a large group of entrepreneurs, builders, and economists from Russia, we are now trying for establishments and factories that were purchased but haven’t been operating for years to be bought back and revived.

Your newspaper flourished perhaps in the mid-90s, but, on the other hand, in that period there were incidents of periodic violence against Golos. If I recall correctly, the editorial office was even burned down.

It was burned, and I was beaten twice, and so on, and so on.

I recall that this was all because of Golos’ political pieces.

Naturally, they beat for politics.

Did that scare you?
Of course it did. Wouldn’t you be afraid if you were beaten in your office?

Naturally, I would.
And if every day you received a summons to appear in court — for a dozen widely varying issues.

Mainly for stories having what slant?
The reason, I can say, [was] for the policies in place at the time, which didn’t accept different opinions and didn’t make any concessions. Say, if they said we’ve survived with such-and-such mineral water, they didn’t tolerate it if you insisted the opposite.

The policies of subsequent ruling authorities at least enabled discussion and dialogue, and some ideas were implemented. I can’t say that that was completely acceptable for us, but in any case, there was no active resistance. 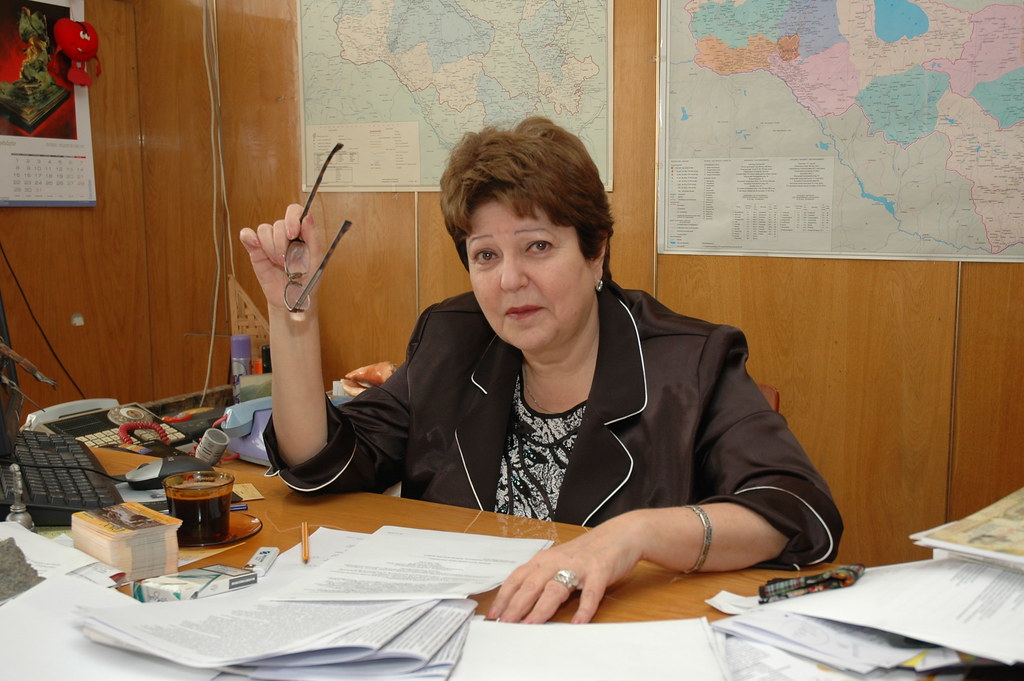 In this interview series, several newspaper editors considered the “no active resistance” as more sly policies, to pressure the media.

It’s because they haven’t felt the full extent of the HHSh [Pan-Armenian National Movement] regime’s policies personally against them and the activities of their newspaper: the immoral legal proceedings, the persecution of our journalists with their media outlets, the public ridicule, and the attempts to deprive the paper of its earnings, to ban to print in the 24 print houses of the capital, and to evict the editorial staff from its occupied premises.

In those days, Golos was in a terrible situation, and I’m even surprised now that we didn’t cease our work in those conditions. They shut down the paper, [but] we continued to work on issues. Those were savage conditions.

As for pressure against journalists, the authorities’ creative imagination, well they have teachers from whom they can learn: the governments of France, Germany, the US, “European-izing” Turkey, and “homeland of democracy” Azerbaijan offer shining examples in geopolitical or domestic political issues, when they are confronted with important issues fundamental for their image and dividends.

A separate topic are issues in this context in Russia. So, we [here in Armenia] still have a long way to go to reach them, since we often exhibit a sincere motivation to understand and even accept an opponent’s arguments.

Which is easier for the newspaper to resist: a frontal attack or hidden, unseen pressure?

Apart from the internet, what prompted the sharp decline in Golos Armenii’s circulation?

There are many factors. Let’s begin with the fact that our newspaper is addressed to the technical intelligentsia and to intellectuals in general — to educated people who read with interest the opinions of people like them, our authors. Our readers have mostly left Armenia.

A large segment doesn’t even have the means to buy a newspaper. And the third segment has altogether lost interest in newspapers as such.

What was the largest circulation and when?

The newspaper Communist, based on which Golos Armenii was created, had a circulation of 80,000. We began — I might not remember correctly — but definitely with [a circulation of] several tens of thousand.

Did the entire print run sell?

They’ve always worked with us under the conditions of “no returns”. Till today.

Has the decline in knowledge of Russian shrunk the pool of your newspaper’s potential readers?
Of course. And some of them, as I said, have left.

Haven’t you tried to send the newspaper, roughly speaking, after those who’ve left, to sell, say, in Russia?

What are you talking about — we simply ran after our readers. About 20 years ago we printed in Moscow with 32 pages, a circulation of 15–18 thousand, with the locally significant pieces removed — a very dense selection of content. We would send the bound pages in a special way; they printed it in Moscow and sold it.

The internet came, hard times came, and the meaning of that work requiring extra effort was lost. Till today there are people who want the newspaper, but it’s more readily available to them through the internet. Though, the value of the printed word is something else.

The opportunities afforded by the internet are much greater.

Now I don’t want to talk about known things: the internet conquers society very easily. Everything is easier there: information, misinformation, intentional provocation…

The professional press, ultimately, must be in demand. And first of all, by the state.

Because what’s said from television is simply said on air and becomes lost. Whereas what newspaper journalists write is impossible to erase.

Probably those who believe that Armenia with its abilities can play a tantamount role in scientific-technical and economic terms. I don’t know for the print version, but 45% of the readers of our webpage are young people.

In Armenia, newspapers are in a sort of expectant, abject state. They want to understand: are they going to remain as a print media or not? What about you?

You know what? In Armenia, there are so many objectively inexplicable deviations in public, political life… For example, none of our newspapers in Armenia are competing with the other, and such a thing can’t even happen.

Are you referring only to Russian-language newspapers?

No. All newspapers. Let’s take the entire parcel of newspapers today.

…. Aha, here it is. Let’s sort them: one, two, three, four… [places some newspapers on the right; some, on the left or in the center] These newspapers on the right side, even without reading them we know what they’re writing about. These are papers with a sole and the same subject. The lives of thousands of [their] compatriots are not interesting to them.

… By the way, you can see that our newspaper is twice as big in size as the many other newspapers but the price is the same. In that case, the price turns out to be twice as low. The desire not to lose the school, the culture is great.

In your opinion, how long will Golos Armenii continue to be published?

I can’t say. But in May, our newspaper will turn 25 years old…

I don’t know: is it worth congratulating? Because we’re experiencing very hard times. The situation is serious: a very small circulation, very little advertising… But what’s important is something else. After all, the main meaning of the work we do is to rivet the attention of official and non-official bodies to the solution of serious problems.

But since not everyone on the different floors of government know how to read, and if they don’t read, they can’t understand; if they can understand but they don’t know the difference between bridge and caterpillar cranes, being busy with economic issues…

People who don’t know their country, don’t know its opportunities, and are not united for the sake of the country’s interests — getting anything through to them is simply impossible. This is what kills [us] and not the small circulation.