Refugee Crisis Was a Test for German Media 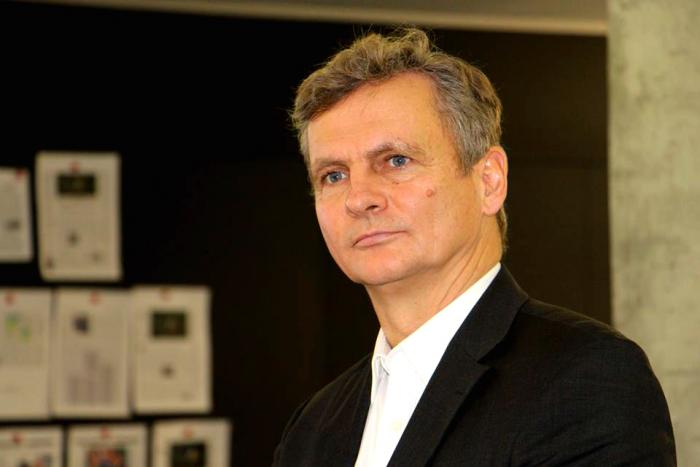 Olaf Jahn [DE] is an award-winning German investigative journalist and the executive director of one of the most important private educational institutions in Germany’s media industry — the Berlin School of Journalism (Berliner Journalisten-Schule).

The school not only provides local journalists with professional training, but also organizes exchange programs for journalists from other countries.

Another challenge, he says, is keeping readers and creating a quality media product in a short period.

What is the main source of information for the population in Germany?

Well, it depends on what kind of people you look at. For example, if you look at young people, modern people, intellectuals, liberals, they mostly consume information through the Internet. Print, which means newspapers, and magazines are read by conservative people, by people who have some kind of middle income, who want stability and so on.

In general, the problem in Germany is the same as in other countries of Europe: the print media loses readers very quickly, and it is not able to acquire new, young readers because those readers are just on the Internet.

But change is coming, and we see that the Internet will overtake print and all other mediums.

Television is still strong; television and the radio are stronger than the Internet. But we have to consider that radio is sometimes just playing, you don’t really listen to it. You read the newspaper and the Internet, but the radio is just playing [in the background], so you can’t really evaluate how important it really is to get messages to people. It’s still important, but I guess the Internet’s influence is closer at least to that of radio more than to TV.

How influential is the media in shaping readers’ opinions?

For example, print, which is losing readers, is still strong in terms of influencing the opinions of readers. So in Germany, the media have a strong influence. I would say they really do what they should do: they put out a lot of information that helps people to form their own opinion.

Even if you don’t have a high school degree, you can be a fantastic journalist, if you are curious and interested.

What is the image of journalists in Germany?

In Germany, journalists have not had a very good image for quite a long now, for many years. Even when I went into the journalism it was the same, and I started in the 80s. Journalists have always had a problem with their image. One reason maybe is that in Germany you never had to have a formal education, so everyone can become a journalist (which, in any case, is not criteria, because even if you don’t have a high school degree, you can be a fantastic journalist, if you are curious, interested, and you can get into the story).

The other reason, of course, is that the media very often report on problems, and people don’t like problems: if they read only about problems, it seems that journalists just talk about negative stuff, [who see only the negative].

This topic appears every day in the media and every day a lot. In the beginning of the refugee crisis, the German media had some problems in positioning themselves correctly. Sometimes even reporters were overcome by emotions. Because if there are millions of poor people exhausted, sometimes injured, just walking across borders, then of course it’s very difficult to step back and say ok, it’s emotional, but I will try to be just objective without showing my empathy.

There was a discussion on German media whether or not and how much one should put his own emotion in one’s reporting, and even now there are various opinions. In the beginning, people were happy that everyone was coming, then suddenly people said but this might also cost money.

There was a headline in one of the newspapers “Refugee crisis to cost Germany 3.6 billion euros.” This could be terrible for someone hearing that news, but what the media did that was very good was they said, yes, they cost us money, but in the end we will have many people in Germany with lots of talent, which also will help our society.

Every newspaper and every media was just trying to find the right way, the correct way to report.

For example, there were media reports that crime rates would increase. In fact, if you look at all studies that are available, that’s not true. The average refugee is not more or less criminal than a German. But in those situations, sometimes topics come up and they spread in a newspaper and then on the Internet, and it becomes very difficult to counter that information. But I think in general German media was able to do that.

The media very often report on problems, and people don’t like problems: if they read only about problems, it seems that journalists just talk about negative stuff.

In our country, real pressure is not censorship or pressure from big companies or big media that don’t want to publish something but the general economic situation.

The biggest problem in Germany for journalists now is that they have less time to do their jobs [well]. All the media outlets have cut staff. There’s still a lot of work to do, there’s more pressure, but less time to do research. And of course, salaries are not rising as quickly as they used to in Germany. In general, there’s no time to do very good journalistic work, and that’s really difficult.

Of course, freelancers have other problems: if they report on controversial issues, they might be taken to court. And that can be very expensive. Even if they are right, in the end they may lose a lot of money. But in general, even freelancers often are members of journalists’ unions, which generally pay the court and legal fees, and so they are paid for those situations.

In my experience, people with fixed contracts and in high positions in Germany are not members of the unions. Very often in those unions are freelancers who of course are in weaker [more vulnerable] positions.

You also have some very interesting advantages if you’re a member of a union. For example, you could get lawyers or undergo vocational training for very little money. For example, if you are a writer and you think that your storytelling is not very good, you can go to a workshop for 2–3 days organized by the union. You pay very little money: something like 80 euros for 2 days. In Germany, that’s not so much; usually you pay 400–500 euros. I think this is quite important.

Is German media changing because of social media?

Most of the papers already have their own social media team. In fact, less than 50% of the public use social media, but news outlets have to react to the public, and they do successfully. They have small teams that share all the stories via Twitter and Facebook and who try to build communication between readers and the papers.

I think that they also use social media to find out what subjects are interesting to readers, what are the trending topics. And according to that, they decide what subject will become the big story online or in print.

The interview was conducted during the “Media partners on the move for democracy, transparency and exchange” program organized by the Berlin School of Journalism. The program is supported by the German Federal Foreign Office.