“We will develop further if there is competition” 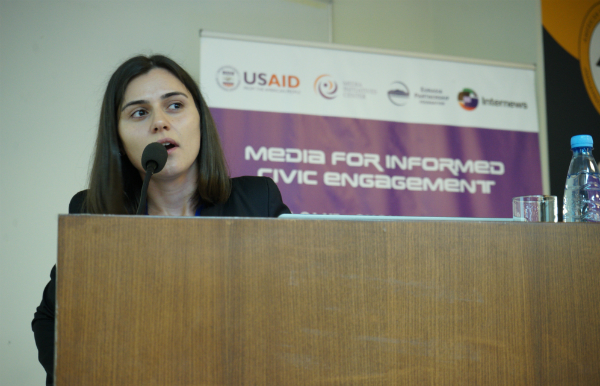 Nino Macharashvili is a journalist with and the media coordinator of JumpStart Georgia, which produces infographics and works in data journalism.

She is one of those people who present dry figures and data in attractive packaging.

Nino finds that in order for journalism to keep up with today’s trends and make news interesting and engaging, it must do so through unique design and the latest technology.

Months ago, Macharashvili was in Yerevan to participate in the DigiStory Digital Storytelling conference organized by the Media Initiatives Center [also responsible for this site], during which she spoke about the trends and challenges of digital journalism and multimedia tools.

When during the DigiStory Digital Storytelling conference in Yerevan you described the challenges and joys of digital journalism, you said that JumpStart Georgia is neither a nontraditional media nor a non-profit organization — you’re storytellers. What does that mean?

It means we like to tell stories that, in our opinion, others aren’t telling and that need to be told. We tell these stories through infographics and data visualization, so that people understand easily, filling the gap that exists in traditional media.

Recently we begun to expand our activities. We presented the Storybuilder tool that creates multimedia stories, which combines video, text, and audio. It draws readers and makes the information more attractive. There’s a problem: readers no longer read long texts; they’re lazy. Thus, the media’s challenge today is to make its product more attractive and appealing for media consumers.

What’s the market situation and demand for infographics and data visualization in Georgia compared to other countries of the South Caucasus?

Everyone loves infographics and data visualization and marvels at how it’s possible to present difficult and complex information easily using these [tools]. We’ve been getting very positive feedback so far.

What we’d like to see in our country, but unfortunately, we don’t yet see it is for news outlets and media organizations to adopt new ways of telling stories. I think the reason is the lack of people in the newsroom that have the relevant skills: this work requires the joint efforts of a designer, computer programmer, and a journalist who possesses skills in data journalism. 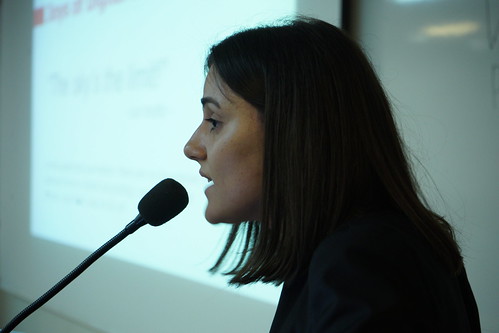 Furthermore, news outlets don’t have the resources to teach their employees those skills or to hire the appropriate experts.

Sometimes news outlets want to request infographics from us, but because of a lack of resources they can’t afford to work with us.

But there is a demand and interest and since this is also a developing market (new tools appear that journalists who don’t possess special skills can use), I think the situation will change. It’s not easy to learn new things at once; I think the problem will be solved with new generations of journalists.

From my observations, the same thing is happening also in Armenia, since I saw here how interested people are in new tools. I find it hard to speak about the situation in Azerbaijan because the media situation there is different. We tried working with Azerbaijani organizations, but since the media is pressured there, cooperation is very difficult.

I think that due to international cooperation projects, Azerbaijan’s audience likewise will be able to get acquainted with multimedia tools.

“One of our goals is to change the media sector in Georgia: we don’t work simply to work; we do all this to inspire and encourage others”.

They say you hold the monopoly in Georgia.

Because we’re the only ones in Georgia working with infographics and data visualization. But we’re open to cooperation.

By the way, after cooperating with Liberali [magazine] for a year, the site hired a designer and began to create infographics on its own.

And we continue to advise, support, and contribute to improving their quality. We’re under no obligation — just an expression of good will.

We ourselves will develop further if there is competition. One of our goals is to change the media sector in Georgia: we don’t work simply to work; we do all this to inspire and encourage others.

JumpStart Georgia also produces Armenian-language infographics. What made you take an interest in local Armenian topics?

When we began to get positive feedback and saw that our work was accepted very well by the public, we decided to expand the geographical scope of our activities in the South Caucasus.

Since we had limited resources, we began from Armenia. We hired a local journalist and began to visualize Armenian stories. Our correspondent tells [us] what’s happening in the country, what’s covered by the media and what’s not, and suggests topics and ideas to fill the gap.

I think that in the future we’ll try to cover more diverse and controversial topics. The topics on which we produce visualizations are important for us. Our main goal is to inform many people on a topic and change their attitudes and behavior.