“TV viewers themselves must realize that they are being made stupid” 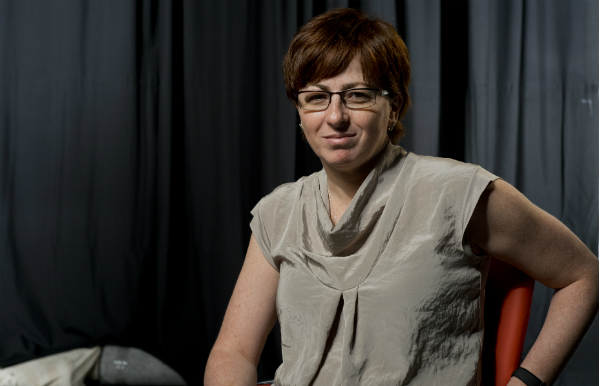 Journalist, historian, and TV host Yulia Muchnik, until 2014, was the head of the most interesting and independent Russian regional media outlet, Tomsk TV-2.

But when the Russian Broadcasting Network last year banned the station and withdrew its license, TV-2 was faced with serious problems. The small channel that covered current and critical topics, which could be called the last free oasis among homogenous propagandist Russian media, was simply shut down.

Demonstrations in defense of the station by residents of Tomsk yielded no results. TV-2, with its impartiality and specific journalistic revelations, interfered with both officials and those calling the shots in the media sector.

Muchnik preferred to see the dignified departure of the station she founded rather than play by the unwritten rules of distorted journalism.

It seems you know everything about Russian TV propaganda, since you’ve resisted it and been subjected to pressure. In your opinion, has this propaganda now intensified?

Frankly speaking, I’ve hardly turned on the TV in the last year. It’s probably a self-defense reaction, since I want to avoid the madness that occurs in Russian national TV stations.

But of course I learn about the more striking “masterpieces” of Russian propaganda through social media, and I try to understand what degree of mutation the propaganda has reached and where is rock bottom.

When the Tauric [Chersonese] story (the so-called conquest of Crimea) and the conflict with Ukraine began, it seemed, that’s it, Russian propaganda has reached its limit, but coming across various television topics, I’m convinced that no, rock bottom still can’t be seen.

Evidence of this was the coverage of the protests against the electricity price hike in Armenia. During the mass demonstrations, I was in Armenia and immediately began to search for information online and speak with my Armenian colleagues. There was the impression that peaceful dialogue among the authorities, the electricity company, and demonstrators was possible.

Established was a situation that was very complicated and complex and with many “players” but, nevertheless, was civilized. It was clear that this wasn’t an anti-Russian protest — especially since being in Armenia often, I mostly have seen genuine sympathy for Russia.

Now it seems because of Russian coverage, the number of supporters has decreased.

In television coverage, I saw all the imprints of the Russian propaganda machine (the second Maidan organized by enemies of Russia; youth who have been fed by the US State Department). That is to say, everything was presented as a conspiracy against Russia.

Yes, of course, such propaganda couldn’t be ignored in Armenia. And it’s quite regrettable that because of such coverage, the number of people in Armenia disposed to being unfriendly toward Russia increased.

Russian channels are freely broadcast in Armenia and have quite a large audience. In your opinion, is it possible to limit the influence of these channels or interfere with the process of brainwashing in any way?

I’m a foreign citizen and can’t give advice. But I have a question: who can prohibit the broadcasting of Russian channels in Armenia? I’m sure that your authorities won’t take that step — having a special relationship with the Russian authorities.

Perhaps there will be protests against Russian TV channels? In that case it would be very interesting to see how Armenia’s authorities would respond.

And if more serious, then it’s civil society’s choice. People have to begin to separate propaganda from actual information. Citizens’ boycott is the only way of prohibiting.

I can cite Poland as an example. During the Soviet years, when the dissident movement was formed and the trade unions had become active (1970–1980), people acted very simply: every evening, when the Polish version of the program Vremya began, everyone demonstratively shut off their house lights and came to the street. They didn’t do anything, simply strolled down the main street, showing the authorities and each other that they are boycotting propaganda through peaceful, intelligent means. That was the citizens’ choice.

And I think that we can pin our hopes only on that choice. Frankly speaking, I expect the same from Russia. I’m waiting for people to wake up and vote with their remote control; that is, to shut off national TV stations and stop watching Vremya and Kiselyov‘s show and instead begin to independently search for information, think, compare, analyze, conclude…

TV viewers themselves must mature and realize that they are being made stupid. And it’s the same in Armenia.

See how Russian television covers your protests. And then conclude that they’re just making you stupid.

If there will no longer be Russian channels with their propaganda, of course, the air will be somewhat cleaner, but it is always people who decide. To hope that one day someone can come and help you is naive.

Can we expect that alternative news outlets will be established in Russia — balancing propaganda?

All that is free, which somehow still breathes, lives, and moves, is consistently destroyed in Russia. Our TV station is one such proof of this.

The only platform where crumbs of information can be found is the internet. But there too, it’s necessary to be an adept searcher — to separate the truth from the false and lies.

Russia now is waging a targeted and fully conscious ideological war against any demonstration of freedom and repressing real journalism.

There simply can’t be a free news outlet under these conditions. Much has changed in Russia in my lifetime. And though I don’t lose hope that I’ll manage to see also fruitful changes, alas, no grounds for these changes can be seen.

Will it explode at once?

We often think about this. The entire system’s horror and misfortune created in Russia is not even the situation today but that this system has destroyed and eliminated all possible means of civilized transformation.

And now there’s the impression that the system might suddenly explode from the madness growing inside and bury under its ruins both those who comply with and those who resist the system.

NGOs and the media are the mechanisms that allow any system to undergo transformation, respond to the challenges of the time, and ultimately, adequately explain reality.

But now in Russia these mechanisms are eliminated and continue to be eliminated.