“Now is the time to be restrained and tighten our belts” 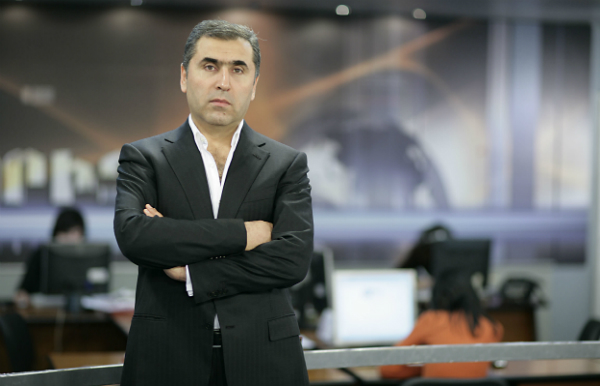 For Shant TV founder and president Arthur Yezekyan, television is first and foremost a business entity, where not so much the wishes but the opportunities are what are important. The entire industry suffered a serious blow from the economic downturn, forcing companies to terminate or refuse many projects. Thus today, Arthur Yezekyan is in favor of a strategy of restraint.

The television sector [in Armenia] changed greatly in recent years. A few channels became part of a single holding, and Public TV Company of Armenia acquired a new director and new tactics. Did the way Shant TV work change?

I can’t identify any particularly major changes. As far as I remember, changes are made regularly in all the [TV] channels. Working in the television sector has always meant to survive, to compete with market logic. There’s never been a time when we’ve relaxed, sat comfortably, received a budget from somewhere and just spent it.

Because of the economy, we were faced with a very difficult problem. In no way can we confidently plan what we have to do. Before developing a broadcast season, we have to undergo at least a preparatory phase, which, say, can take up to half a year. But if you can’t picture what the economic situation will be like six months down the road, even the best initiative or project becomes doubly or three times risky. This is the biggest problem.

When Public TV opted out of advertising, the situation was supposed to change, since advertising money in the market would be distributed among other channels. Was there an increase in revenue [from advertising]?

Public TV’s decision to abandon advertising and the economic downturn coincided, it seems, and we didn’t experience an increase in advertising revenue. In the last two years, there was a decline in the market, which also had an impact on the advertising industry.

If we compare the revenue from last year and this year, we see that it decreased by about 20%. I assume that if Public TV continued airing ads, our revenues would be far less.

Experts assessed the television advertising market at $20 million annually, remarking that it’s quite inflated. In your opinion, how much is it today?

Different figures are constantly mentioned. Added to the depressed moods in the economy were the fluctuations in the Armenian dram exchange rate. None of this can translate into what number we’re dealing with in reality.

The funds allocated to television can come from not only advertising, but also, say, political or business backing (and the audience doesn’t even know about it). Don’t you think there’s a need for transparency?

All the channels’ budgets are on the list of taxpayers. It’s not a secret — it’s just that each [channel] has its confidentiality and policies. Shant TV has no other revenue apart from advertising. I consider speaking about other revenues in our case unfounded.

But the misfortune of all those involved in the TV industry is that they don’t treat television as a business. If they all considered it a business, we would be the happiest people.

If not a business, then what do they consider it?

Everything except a business. For this reason, unusual phenomena are unavoidable.

How would you describe Shant TV’s target audience?

We’re a family channel. Of course, Shant TV’s entire backbone was shaped first and foremost by news programs. For 10–15 years, we were exclusively a news channel. Then added to that were the international formats’ TV shows and the production of [local] soap operas. We literally founded soap operas in Armenia.

By founded, I’m speaking, of course, not about Columbus’ mission, but about a product staged in Armenian reality, which became problematic after ArmenFilm [HayFilm] ceased operations.

To produce a film or soap opera, a huge industry is necessary — with its expenses, magnitude, and so on. Our main “know-how” is creating a model with which we can produce soap operas and cover our costs. We made the production process so affordable that it was possible to cover the money spent with advertising. We experimented for a long time, and finally, we found the recipe that produced a high viewership.

Competition among channels years ago was due to soap operas.

Competition among soap operas has never weakened. But now, producing not only soap operas, but also any TV product is a risky move. Now is the time to be restrained and tighten our belts. Even when developing long-term plans, we have to be as cautious as possible, since everything comes down to economic issues. In the current situation, talking about any large-scale project is at the very least adventurous.

We have a lot of ideas (sitcoms, series) that we can begin tomorrow, but we’re forced to freeze them, so as not to find ourselves in a ridiculous situation.

We’re trying to be stable in our unstable life — roughly speaking, to stretch our legs only as long as our blanket. There’s no other logic. If everyone worked according to this principle, we would have a harmonious TV industry.

I repeat, spend as much money as it’s possible to earn. If the TV company’s monthly turnover is $10–20 thousand, you can’t expect an income of $100 thousand. We too began with a small amount, and step by step reached the situation today. But if from the first day we spent more money than our proceeds, we would cease to exist.

Armenia TV is quite successful at its attempts to move the audience also online and turning views into money. What about Shant TV?

Expectations from the internet always exceed the internet’s real opportunities. Of course, working online is much more simple, transparent, predictable, and measurable. It is an ideal platform corresponding to today’s demands, and of course we too for several years have been engaged in sales online, but unfortunately, it cannot be compared to broadcasting in terms of its prevalence, viewership, and advertising volume.

The internet doesn’t have the mass appeal of broadcasting. Even in the case of TV stations in the most developed countries, the internet factor comprises a negligible percentage. Though we all witness the active spread of the internet, all the same, it’s too soon to talk about its replacing broadcasting.

For the Armenian reality, when more Armenians live outside Armenia [than inside], perhaps the internet can become a platform that unites us (and also turns a profit)?

Five years ago, we launched the “Armenian World” project, which was based on the desire to concentrate and mobilize the Armenian audience in the virtual domain. The means of communication allow you to be a small part of the Armenian world, even if you’re in a remote corner of the world.

We did a huge amount of work, meeting with members of the diaspora, but, though we were initially optimistic, practice showed that the work was moving forward with enormous difficulty.

The main obstacle was the mistrust Armenians have toward each other. Unfortunately, Armenians first and foremost do not trust [other] Armenians. Great efforts are needed to overcome mistrust, but this is above and beyond the powers of one private channel. The support of state and public agencies is needed.

The news programs of all Armenian channels are practically the same. The difference is more so among image quality and varying degrees of beauty, but the choice and arrangement of news and even the footage doesn’t differ all that much.

Perhaps that’s so from the point of view of an ordinary viewer, but of course there is a difference. The style of Shant TV’s news stream, for example, has been constant for years: we’ve always tried to present the news from as impartial a position as possible.

It’s interesting that we’ve been criticized right and left, but we’ve always worked on an open and clear front; our conscience is clear, and we’ve never violated neutrality. An experienced viewer or expert can read between the lines of the news quite well. That’s the difference.

Basically, reading between the lines is what’s important.

I remember when in 1989, we had fallen as a nation into the hands of Pravda and Izvestia newspapers. It was said that you have to read that which is not only written, but also unwritten. And so for years we are going through this process.

If a private TV station puts the emphasis only on news, it undoubtedly will concede ratings to entertainment channels and lose its position and budget. A station is doomed to think about everything. If I imagine that one of these days our TV viewers will begin to watch news programs en masse, the amount of news in our programs will drastically increase. That is, it’s the usual problem of supply and demand.

Which programs are in demand and have high ratings?

Soap operas. I thought that soap operas would cease to interest the audience after some time, but that didn’t happen.

Beginning with the hysteria surrounding Vorogayt, in all of our soap operas we have always stressed social and educational issues. In Banakum [“In the Army”], for example, there was a clear separation between the positive and the negative. Likewise, through Qaghaqum [“In the City”], we were fighting against displays of rabiz culture.

Fresh, modern, and hardened ways of thinking were opposed, and it was clearly apparent which was presented in a positive light.

But even in this case, critics could be found who were displeased with the protagonists’ vernacular and style. Meanwhile, that was all shown as being negative, not exemplary behavior.

Generally, critics can find problems even where there are none, and suddenly they’re writing letters to the president of Armenia.

What paths to development do you see? Is there optimism?

The optimism is that we continue to operate. Our TV station has always tried and even bent to have parallels with its Western analogues. You can’t point to another such area (except perhaps only some wine producers or the high-tech sector).

All the other sectors literally surrendered and put the brakes on their own development.

And don’t forget, work is being done in the TV industry that exceeds our actual possibilities several times over. It would be good if TV viewers appreciated this.