‘Data journalism is not a lone wolf sport’ 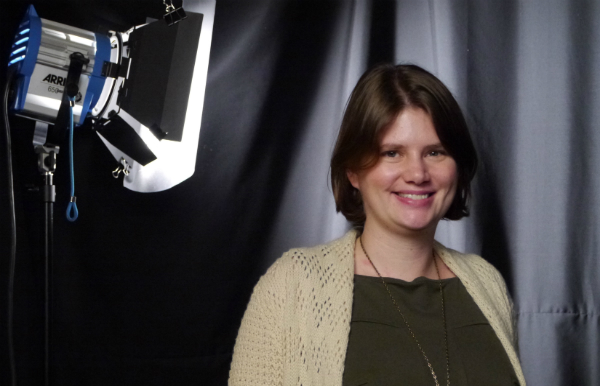 Eva Constantaras is an American investigative data journalist who has participated in various international projects aimed at transparent governance and the fight against corruption.

She is one of the “10 women paving the way in digital media and technology,” according to Journalism.co.uk.

Eva has worked with USAID, the World Bank, Hivos, and Google. As a journalist, she has collaborated with The Seattle Times, El Mundo, and El Confidencial, as well as journalism blogs (PBS MediaShift, Open Knowledge Foundation, Knight-Mozilla OpenNews).

Eva finds that in the age of social media, when people read the news first on Twitter and Facebook, the journalist’s job is no longer to be the first to tell the news but to get to the heart of the issue and, with the help of data, explain why something is happening.

What is the most essential thing about data journalism?

A data journalist will go a little bit deeper and look at the hospital’s budget and see was it overspent in a certain area or look at a local budget to see if the funding of a hospital was cut. So a data journalist is trying to find out what the reasons are behind the public losing access to healthcare or losing access to other public services, to basically trying to improve the quality of life of the journalist’s audience and the way government works.

What is the formula for a successful data journalism product?

There is a couple of things that you have to keep in mind. One of the really important things is don’t forget your job as a journalist is to tell a good story.

People don’t care about data — people care about people. So if you don’t have a human face to your story, no matter how interesting or how compelling your data is, people want to read about other people’s human stories.

So multimedia reporting is really good in those cases, you can have a video that tells us the story of someone impacted by a particular issue.

You can have a strongly written narrative piece in a magazine or investigative journalism platform that takes someone through an explosion of the story and really helps people understand how this data issue is impacting real people’s lives.

What is attractive about data journalism?

The media in lots of places around the world is facing an  industry crisis. People are looking at Twitter and Facebook for breaking news, and a journalist’s’ job isn’t really to be the first person at the news story anymore. His or her job now is to be the best source of information about that story.

And I think that really for journalists across the world who are really worried about their jobs and about the future of the media industry, they see this as actually a really great opportunity to improve the quality of their work and make their own society much more important. They really feel the public service mission by explaining to citizens and helping them connect and become more engaged decision-makers and become more involved in local governance through data journalism decision-making.

So there’s more information available, but what data journalism produces is information that citizens need to know to make more informed decisions, to take better care of their family, and to participate more in their government and their society in a way that’s more informed. The information that’s out there might not necessarily be relevant to the problems they are facing and the choices they need to make.

There is a lot of data out there. How can the journalist verify the information they collect?

I usually advise journalists to develop a “news nose” for data. Journalist aren’t statisticians, experts, or researchers, but what they do have is a kind of a sense of when something is a little bit strange. So we give them some basic skills of what to look for in terms of what is the organization that collected the data:

So it’s basically queues like that that make journalists aware if there’s something suspicious about the data.

I think a lot of data producers are pretty open to answering those kind of questions, and it’s the journalist’s job to ask questions, so this is just another question to ask your source.

Data journalism involves not only writing articles, but also a doing a little bit of programming. What are the skills that a journalist should have in order to work in data journalism?

You are right. Data journalism can involve a very diverse skill set, so again, needed are more statistics knowledge for data analysis, graphic designers to do visualisations of the data, developers that do news apps, and programming to make the data interactive.

I think it’s much more common and more realistic for data journalism teams or open data communities that have the skill set between them to come together.

Journalists usually work alone, so one of the hardest things for journalists to learn about data journalism is it’s not a lone wolf sport. You have to work together as a team for the strongest possible product.

Data journalism is pretty new for Armenia. What tips do you have for Armenian journalists?

Well, actually data journalism is pretty new everywhere. The handy thing for journalists in countries like Armenia that are really just getting started is that there is an international community that’s willing to help out new data journalists; there are hashtags they can follow on Twitter; and there are lots of groups, so if a journalist doesn’t have particular skills or is stuck, there is always the international community that’s really interested in helping out.

It’s a very good idea for Armenian journalists to work with neighboring countries and other journalists that are also increasing their data skills, so that they can learn together.