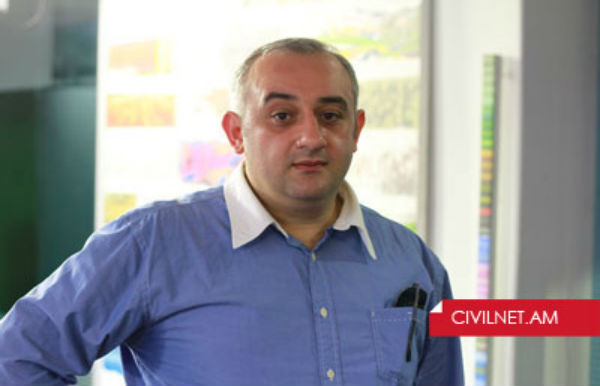 Producer and host of Kentron TV programs Urvagits (“outline” or “profile”) and Haykakan Urbat (“Armenian Friday”) Petros Ghazaryan finds that the key issue for Armenian television is the aspiration to present life as “square”.

In his opinion, journalism turns the system of domestic taboos into an easy, safe occupation and, by and large, an imitation.

How do you describe the main problem in Armenian television today? Is it still considered the main medium?

Television has a few simple functions: it first has to inform then be a platform for the discussion and clash of different thoughts and ideas. It should also play an enlightening role and entertain.

As to which of these functions Armenian television fulfills today, it’s hard to say. It seems to me that it fails on all accounts. To produce enlightening, educational programs, great intellectual potential is needed, which we don’t have, and that which exists in the industry is mostly tasteless. Much has been said about the poor quality of entertainment programs, so I don’t want to repeat it.

Probably the most established, but at the same time the most criticized, is the media industry.

Because it’s uniform and unanimous?

I don’t think it’s unanimous. Though, of course, it’s not as pluralistic [in opinion] as we’d like.

But the worst thing is that television is not a platform for different ideas to brew and clash. When I say different ideas, I don’t mean just the clash between the government and opposition. And no matter how much we try to make our lives square, all the same, they are diverse and that’s how they’ll remain.

Unfortunately, you don’t see the problems and contradictions of various social groups and classes on Armenian television. Actually, many people are minorities (I don’t mean sexual or religious minorities; rather, I mean in terms of thought), and the clash of their viewpoints doesn’t appear on television.

I think the reason is the TV companies’ system of internal taboos, which not the authorities, but we created. Those internal taboos, of course, are the continuation of political taboos and are silently in agreement with the public.

But if television personnel and owners sense that, they can also change the situation.

No one senses that anymore; on the contrary, they say that everything is great.

There’s the impression that all the TV stations are the custodians of national security and are toeing an overall, quite superficial line.

And who decides that? Perhaps the chief of state security? No, of course; no one decides for us; it is the result of the public’s general consensus. No one is told, for example, that a topic can no longer be discussed on air.

The problem is that Armenian society has multiple layers, but television always makes it into a single layer. Only the government–opposition conflict is perceived; we simply don’t see other signs of diversity on television.

If we want to have quality television and we consider it important, we need to invest large amounts of money. But we now have that which we have.

To a great extent, we’re a poor country, and poor countries can’t allow themselves to have 18 channels with nationwide coverage. Our criteria and our financial resources are inadequate for each other. And that’s a political issue.

In Armenian television today, It’s easier to be meaningless than try to do something new. That’s why are there are so many meaningless faces on television.

It’s easier and safer. But you have to be able to put yourself in the place of a plant or vegetable. And that requires effort.

I think, our [Armenian] society is not yet ready to do more than it does for freedom of speech. Today our media has abolished lies. As such, lies no longer exist. There is a media’s own information, reliable sources, a circle of people close to government, Kremlin sources… there is a wealth of stupidity, but all that has a name: lies. Actually, a lie today goes by many names (apart from being called a lie).

You can tell a journalist that he wrote a lie, and he will respond, it’s not a lie, it’s information received from my close sources.

Since our [Armenian] media outlets mainly serve political parties, they are engaged in diverting the public’s attention from [asking] the right questions. And this is being done in the most heinous way — by telling a partial truth. And that’s worse than a blatant lie.

Armenia’s media sector today is flooded with partial truths. And we’re all in this situation: one, more so; another, unconcealed; yet another, by not having another choice; and another, by enjoying being a zombie.

In such a media industry, citizens are confused, being unable to distinguish between a lie and the truth, between good and bad. Television has to help people to make their own decisions, but the function of almost all media outlets now has become to do it so that people are unable to make decisions. Say, they will know who is corrupt, who is guilty, what should be done. This problem is everywhere — from politics to teaching Armenian literature in schools.

And what should be done?

I don’t consider myself one of those people who knows what needs to be done. I think, each person in his place has to know what he needs to do.

Recently, when there was a rally against signing this shameful gas contract [with Russia], one of my friends said that the rally won’t change anything. I answered, if walking down the street you see that, say, your sister is being attacked, wouldn’t you get involved? You know beforehand that nothing will change; you’ll be attacked too, along with your sister; but you can’t just calmly go home, thinking you can’t do anything.

Many people now also treat Armenia like that. What’s going to change…? It’s possible that they’re right; nothing will change in Armenia, but something changes within us. Perhaps we’ll awaken and become better citizens. What is going to change more than that?

Assume that a journalist is a member of whatever party is funding his media outlet. He gets paid, but how can he write against basic human things, explaining that that’s what his party requires? You know, there have to be standards in everything.

That doesn’t happen right away. It seems that the boundary can be moved a little, then a little bit more, and in this way, slowly all internal boundaries are crossed. And the journalist and the media outlet become bubbles.

Either a bubble or a political “killer”. You write so many lies that it begins to seem as if that’s the norm. No citizen of Armenia today is surprised that a media outlet publishes lies.

Perhaps we need to work completely differently in such a media industry? With enthusiasm…? In any case, by being the producer of a lively television debate program, you can also ask new types of questions.

The purpose of debate is to solve problems. When years ago, Gevorg Altunyan and I came to Kentron TV, those were quite difficult years (A1+ had shut down and many accused us, that we’d assumed a pro-government position). But we adhered to a very simple formula: if a guest has a problem, then you have to ask him about that problem. Otherwise, your presence is pointless.

And I’ve been working like this for 12 years. Sometimes they ask me, why don’t you talk about good things? I respond that our issue is to notice problems and raise them. After all, the point of a debate is to create a platform for discussing those problems.

Isn’t perhaps the choice of debate participants also evident of a certain kind of PR?

You know, PR in a positive sense practically doesn’t exist in Armenia. In Armenia, who has public significance and positive influence for his PR to be done? To be honest, we exaggerate the role of PR and anti-PR. That’s an activity that requires certain intellectual and creative potential, which, after all, pursues a specific goal. But in Armenia it’s more about the discrediting [and smear campaigns] done in a brutal manner.

PR, as well as media, is in the domain of civilized relations. But we have become a country of idiots, where, waking up one day, you might suddenly discover that your country has a debt of $300 million. And when you ask, why didn’t we know this, they respond, we said it, but you didn’t know.

Basically, they look into our eyes and say we’re idiots. So what PR are we talking about? Is it possible to ‘do PR’ on the contract with Gazprom?

They do what they can. They say it’s our only salvation. And, by ‘doing PR,’ any Russian decision is justified also by a gas deadlock.

And how many people believe that nonsense? Even if justifications are made on television every day, people, all the same, will turn off their TV sets and continue to live.

What concerns me the most is mercantilism. If a person has aspirations, some compromise is acceptable, but if a person who’s safe (as are his grandchildren and great-grandchildren) is waging a life-and-death struggle only for the sake of money, that’s already an illness. We’re now ill with materialism.

The rich have the psychology of the poor: they want to earn a lot of money so they can feel good. But then it turns out they don’t feel good at all, and they begin to go after money again. Again they feel bad; they think, probably we ate little — let’s eat a few million more. They eat [and eat], but, all the same, they remain hungry, because the problem is not the lack of money but self-perception. Money doesn’t redeem and never gives meaning to the meaningless.

Of course, man is a weak creature. But if over time the country doesn’t develop, doesn’t progress, everything is devalued. We’ve turned Armenia into an imitation country, and journalism along with it.