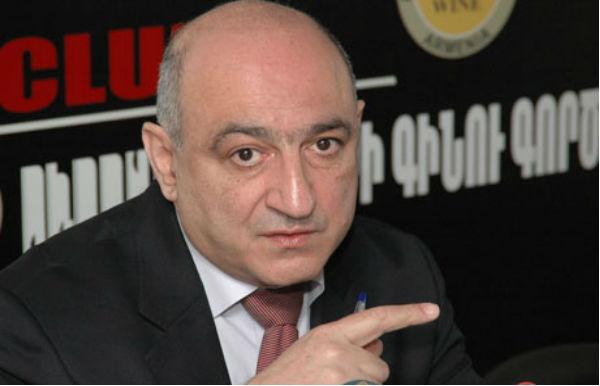 The new year, 2014, promises not prospects, but rather, confusion. Many things are changing in unstoppable ways in Armenia’s economic, social, and information life, especially taking into consideration the new political course toward the Customs Union.

Yerevan Press Club President Boris Navasardian, speaking about the possible transformation of the media sector and public life in general, stresses that it’s necessary to be prepared for the changing rules of the game, and he makes quite cutting and sobering forecasts.

What’s changing in the media sector?

In the first place, the attitude toward society and public opinion is changing. Before, there were rules of the game that were dictated by Armenia’s integration in a geopolitical area in which neglecting anyone was unacceptable and where one had to reckon with every citizen and journalist. And, by the way, settling accounts was not conditioned by being dependent on any one person or structure. It was simply accepted, and that was all.

In the past, people who neglected public opinion, for whom, by and large, it was all the same what others thought of them, [at least] somewhat constrained themselves, they held back. Now, in this new state of affairs, they can feel completely free — in accordance with their nature; that is, to think who is a journalist? who is civil society? who is a citizen, generally speaking? If I can whatever I want, then I will — if my owner, or rather, my slave owner, allows me to.

These new rules of the game enter the sector, and public opinion ceases to have meaning. And if it doesn’t have meaning, then the main instrument of expressing public opinion, the news media, likewise loses its role, importance, and impact on public processes.

Are we becoming similar to the media reality in Russia?

We can’t compare Russia’s news and information sector with ours, as there are diverse and various customs there, which we don’t have.

In any case, despite the fact that Russia is not a democratic country and fundamental freedoms are not valued, there are artists and cultural workers, scientists, and intellectuals there who are influential and, at the same time, are not dependent on the ruling authorities. And the authorities are forced to reckon with the opinion of these people.

In Armenia, those people whom it’s not possible to ignore are quite few or don’t exist at all. And the cultural level and upbringing of those who are prone to neglect usually reserves them the right to not even be aware that there are really valuable people.

Often those who reveal the boorish behavior of state officials are journalists, who unnerve and “prod” the authorities.

Yes, they “prod” them, and in many cases, those are successful attempts. But that doesn’t change the officials’ behavior for the very reason that public opinion is neglected. Many even think that the more cynical they act, the more they will show their strength and enforce their positions.

These are more so rules guiding the criminal world…

Yes, they are customs and rules of the game of the world of criminals, and more specifically, penitentiaries.

And the more we decrease our dependence on Western structures and acquire greater dependence on member countries of the Customs Union, and Russia in the first place, the more exacerbated the neglect of public opinion and news outlets. And when your influence on the world’s powerful shrinks, you become defenseless. Then it’s easy to silence, shut, and hit you, and destroy your property.

I think there’s a serious threat that we’ll return to the reality of 5–6 years ago, when violence was the main form of censorship in Armenia. At that time, of course, they tried to implement censorship in other ways — through pressure in the judicial system, the use of financial leverage, and so on.

Under these conditions of total neglect and defenseless, I don’t rule out the return of old, tried-and-true methods of pressure.

For example, the arrests and murders of journalists…?

There is such a risk. If a news outlet, responding adequately, cannot attune the public against the oligarchic-security class (since the public has neither power nor influence), then that that class understands that it can do anything. Especially since law enforcement agencies and the entire judicial system more or less gradually weaken the inclination to maintain parity.

Can the Russian ruling authorities investing in Armenia’s news media be expected?

It doesn’t seem to me that in this situation, ruling authorities (also Russian) will spend large amounts of money on news outlets. They more so will give the money to spreading their ideology and to developing other corrupt schemes. We know quite well that wherever there are political changes with Russia’s involvement money is set aside for propaganda.

But it’s noticeable that the propaganda is carried out quite unskillfully and ineffectively.

Those carrying out the propaganda don’t even expect a specific outcome from their actions. It is a formality, as it was, say, during the Soviet era, when many newspapers were published in large numbers. Those papers didn’t play a role; they simply thought, well, let it be.

I think, there will be these types of allocations, which won’t lead to any serious substantive changes. Simply that a few journalists will get paid salaries to do nothing.

But is it possible to expect that media executives will try to resist the new rules of the game with common efforts?

I’m not expecting that from [media] executives, since media managers and owners have a very clear attitude: that the news and information market is a jungle and each [person, news outlet] has to try to solve his own survival issues. There has never been the tendency to shape the overall interest and overall defense mechanisms. And, moreover, it’s unlikely in this new situation.

This is usually done by those states that have strong traditions in their media sector and implement policies in the information sector that stem (mainly) from public interests.

State policy that aims to maintain a quality news media sector, shape the advertising market, and establish a financially strong press has to be implemented. After all, that’s an industry which must remain national and satisfy public demand. That idea has never existed in our official policies.

But what’s interesting is that it soon will be, as there’s an aim to raise the Customs Union’s image. Of course, they’ll do insignificant things for the most part.

Say, there will be more films that talk about what a great country, for example, Kazakhstan is. Perhaps Kazakhstan, which has a lot of money, will allocate funds in the way of grants for producing those types of films, for describing its wonders.

Of course, such programs are so primitive, and content that assumes engagement is so miserable, that often they have the opposite effect.

You know, no matter how much we don’t accept that there’s a positive change in Armenia, we ourselves have changed a lot (in terms of values, customs, and humane relations).

I’m convinced that today even a civil servant of Armenia finds it difficult to return to those times, but they force him to, saying that from now on it will be as in the Russian saying, “I’m the leader, and you’re the fool.” At least for some people it wasn’t like that, because in any case, they did work according to international standards. And if you’re requiring quality, then you have allow some freedom for creative thought. All this is no longer valued, and we again will have the unimaginativeness of our bureaucratic class.

It’s already returned. Many of us know people working in the business sector and law enforcement agencies who are simply afraid of expressing an opinion only because they understand that if they talk, they’ll be deprived of [their] business, will be put in prison, or they’ll try to influence them through members of their family. And no on will make a peep.

In this state of defenselessness, the culture of fear will spread.

Do you agree that not making the KGB archives public allowed the continuing of people to be controlled through the same secret services’ methods and compromises?

That’s one of the levers, and it’s obvious that even people who have nothing to do with the KGB use those same levers also on the new generation. I’m convinced that a majority of our oligarch elite were such insignificant people having no meaning in the 1980s that the KGB didn’t even take an interest in them.

Even if there was lustration during those years, today we would again have a [social] class that is controllable in the same way and is dangerous for the country and the public to the same extent. The so-called new list of those people who are controllable and can be used needs to be made known to the public as much as possible. And not only our [Armenia’s], but also the international public. I think, there are enthusiasts who will assume this task. To a certain extent, this is a self-defense measure.

In the case of the internet, “underground” has a different meaning, but, naturally, we must be prepared also for that.

This is turning out to be an extremely desperate situation…

Having long-term programs and expectations is not acceptable practice in Armenia. It’s as if we think, whatever there is now, that’s it; we shouldn’t expect more. Of course, it’s not like that. I won’t be original if I say that, in any case, a class of citizens is being shaped in Armenia. And it’s gratifying that playing a large role is the youth, who doesn’t accept the current reality.

Ten years ago, economic growth was observed in Armenia, and regardless of whether there was progress (in terms of democracy and freedoms), for many that was a justification. Many young people excited by the economic growth, who had not seen the Soviet Union and didn’t have romantic ideas, very easily integrated to the new life, where the economy was developing and there was the possibility of developing a professional career. They thought that you could forget about the rest and just do your own work. I would say that was the main trend of educated youth.

Now it’s not like that: educated youth understand that in order to develop and stay in Armenia, they themselves have to change things. And that is the encouraging and bright point that I see. And it seems to me there are the grounds for this.