‘We Live in a Century of Irony’ 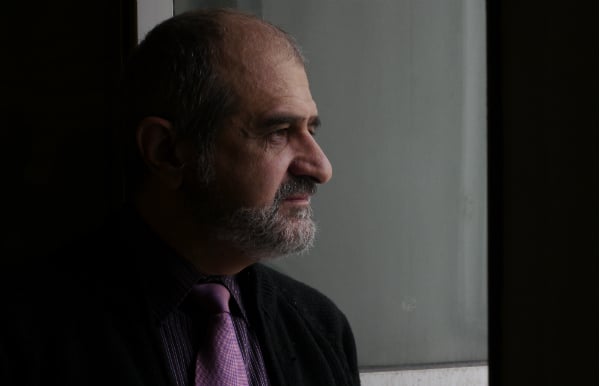 Ruben Babayan, the director of the Yerevan State Puppet Theatre named after Hovhannes Tumanyan, considers fecund the wave of civic activism following the recent presidential election, noting that a change in society is taking place.

According to him, what is most valuable is that youth are acclimatizing to the new culture of communication and witnessing a reality whereby people don’t threaten to smash another’s face or slash his throat but rather to greet one another smiling — and after that, to feel more productive.

Babayan is sure the cause of problems in Armenia lies in poor education — including the absence of protection from media manipulation. Considering the 21st century to be a century of irony, he talks about the “complexes” observed in Armenian society, overly serious people, and people who are afraid of humor.

Now, it seems, we’re all trying to hear, see, and find out as much as possible. Is the amount of information consumed proportional to a state of internal satisfaction?

That’s a matter of education, which, I believe, has a very simple solution. You have to be able to isolate the main [information], separate it from the secondary. And this principle works everywhere, not only in the context of media consumption. One must, for example, not read a book but be able to make use of literature. I assure you, this is very important. It’s important to know from where, how, and in what dosage you can receive the information you will need (if, of course, you’re searching for information suited to some task). This is an everyday, ordinary educational process.

Otherwise, it turns out that you simply press a few buttons on a computer and information comes and floods your defenseless brain.

I always say that our primary problem is the poor education system, especially schools. You would’ve noticed perhaps the hatred school teachers [in Armenia] have towards the Internet. Many complain that the Internet killed literature, and they don’t even consider for a moment that education also means teaching the skills to use different tools.

We often say that televised information is directed by the ruling authorities. Of course that is so, but I’m sure that a person who’s received a normal education and thinks independently can get out of that “directed” situation quite well and correctly perceive the information he receives. At least to understand where there is an attempt to use him, whether he is being manipulated or not.

Is that also education?

Of course it is. Now I see the solution to all problems in education. We often say that someone will come (say, in the outcome of the election) and immediately change the quality of our life. I’m sure that no change will occur if the demand for change doesn’t come from the public. And the public can make that demand when it has the corresponding educational qualification.

But the educated, versed man is quite dangerous, if only because he can ask the ruling authorities uncomfortable questions. Perhaps it’s to resist the threat that schools in particular are condemned to neglect and decay?

The educated man, of course, intimidates many. But there’s a great paradox here: you can’t do anything in a partially educated society — it is without prospect. Any echelon in public services, beginning from the smallest (say, a building commissioner) to the penultimate has reserved the right to say, “Nothing depends on us, since we’re only fulfilling tasks that superiors have requested of us.” Ok, say, we agree, but a question arises: to whom can the last [i.e. the highest] echelon say that?

When a society is kept in the dark for a very long time, there comes a time when this begins to bother those maintaining the darkness, who one day, amazed, notice that they can no longer do anything.

In Armenia, Facebook is an extremely active platform — it has, perhaps, become the news outlet with the widest reach. It has also shaped society…

It’s naive to think that virtual space is the whole world around you that you yourself choose, design, and edit. Facebook easily creates the illusion that you’re loved and valuable (for example, in one day, you get hundreds of “likes”).

But it’s very important to remember that the whole world is also that segment (and quite a large segment) that doesn’t communicate with you, doesn’t agree with you, and in some cases is even against you.

In general, the ability to understand others (especially if they have completely different views) and find a common language with them is very valuable. I think it’s clear, if we’re trying to understand each other, there’s headway, but once we stop understanding each other we move towards war. And by the way, in war, shooting is not obligatory — we can find ourselves at war with neighbors, friends, family, sisters, and brothers — in an ineffective war…

And as we know, children are not born during war. Children are born out of love.

You manage one of the most long-lasting theaters in Armenia, which finds topics of conversation with not only children, but also adults. It’s interesting, why is Armenian theatre, it seems, always late, not trying to turn current topics of [public] concern into stage material, say, even through the political documentary genre? After all, theatre is a media platform that is not only the oldest, but also has the potential to work online.

Theatre has to be different. Of course we have successful performances, but they don’t create an atmosphere. I agree, theatre shouldn’t be indifferent to that which is happening in society. I think, the problem is that theatre cannot find an artistic way of responding to issues of concern. Theatre is neither a rapid response team nor a mass media; its audience is much smaller than the number of readers of any daily newspaper.

And then also, if theatre begins to respond to reality the way that, say, a daily paper does, it won’t be able to withstand the competition. Newspapers, television, and online news will do the same task better and faster. Theatre needs to take a more in-depth look. After all, don’t theatre-goers also want to derive aesthetic pleasure, to enter into dialogue?

And finally, let’s not forget that one of theater’s functions is to awaken the viewer’s creative juices. The purest art, for example, is music, since if it’s good, it definitely prompts the listener to create as well — and to do so equally with the artist.

In any case, I think that popular theatre is not so much theatre. During Soviet times, it was said: in the morning, in the papers; in the evening, in the songs sung on stage. Such a theater, a unique theater, of course, can exist, but real theatre is a platform for more profound conversations.

The role of popular theatre is now quite successfully fulfilled by humorous posts, demotivators, memes, and satirical photo collages, which appear mainly in the media and social networks and then are actively circulated in everyday life. There’s the impression that creative juices are expressed with humor.

Humor, in general, is a splendid thing. And, I think, all the examples you mention are the demand of the times. Generally, the 21st century is a century of irony. And that’s great. All those who take themselves, their nation’s ideology, and put it this way, the right course ordered from above too seriously evoke laughter and, to a large extent, don’t make great progress. And the opposite: if they look upon all that with irony, they are much more effective as individuals. Humor has healing properties, and in every period of history, the ignorant and people with complexes have been terrified of humor.

It’s noticeable that many in Armenia have trouble accepting humor in practice, especially those who, according to them, have achieved a certain position. They can’t tolerate not only humor, but also the light-hearted life. By “light-hearted” I mean being light-hearted toward one’s own dress, behavior, personhood. It seems to them that the more serious they present themselves, the more value they’ll have. If we remove their suits and ties and the seat below them, and leave them naked, very quickly we’ll be convinced that they’re not worth a penny. And this is why they all hold their “heaviness” so tightly and say such serious words.

I think humor is a divine attribute. When we say that God made man in his image, let us remember also that a sense of humor was given only to man. No other living creature apart from humans has this sense. Animals can think, imagine, even talk, but they are unable to relate to themselves and the world around them with humor. This is given only to man; therefore, it’s a divine grace.

Television continues to play a large role in our life. Don’t you think that, by putting into circulation the “weighty” and thick-skinned image you mention, it often becomes a laughing stock itself? Isn’t it old?

Armenian television is definitely very old — not only humor, but also many other important things are missing in this field. Television works as if the Internet doesn’t exist. Of course, one comes across interesting programs, so-called oases, just as one comes across small oases in society (for example, environmental activists, groups protesting the spread of foreign-language schools, and so on).

I’ve noticed, as well, that whenever the dose of self-irony in a talk show or any other program goes up a little bit, immediately there’s life on television.

But we’re generally serious, and the reason for this are the numerous complexes. One person says we have a 5,000-year-old history; the other counters, no, we have a 10,000-year-old history. And everyone carries the burden of this millennia on their shoulders and walks burdened in the world. But if suddenly someone tries to carry not that heavy burden but himself, immediately he will be convinced how light and easily he can walk.

In general, you shouldn’t burden this land, this country, with your own existence, to wrap your presence around the necks of those around you, and to act such that those around you dream of being liberated from you and of breathing easily without you.

It seems we’re talking about ordinary things, but actually few of us consider what impression we leave on people — and, more so, when we draw the media’s attention and we’re under a microscope. After all, we can also smile, laugh at ourselves (also ridicule ourselves), and give less importance to our position.

You know, I’m very happy that this political innovation entered our lives as a manner, a model of civilized contact. In all the elections, we’ve heard that candidates have threatened or insulted each other, but now a completely other culture has been adopted. And it turns out that it’s quite effective too, since people regarding each other at ease can more effectively solve problems than if they threaten to smash each other’s faces and discredit one another.

I’m sure that a person who is prepared to laugh at himself will neither cling to his seat nor quickly fall from it.

Again I say, God is light-hearted and full of humor.

And He created the world with humor…?

Would He create such a world without humor…?

The [late] actress Faina Ranevskaya [once] made a brilliant remark: she said, I was so smart that I was able to live my life lightly.