“Media Ethics Should Begin in the Newsroom” 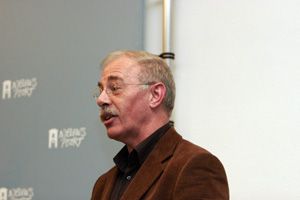 Huub Evers is a freelance media ethics expert and part-time researcher and supervisor at Fontys University of Applied Sciences, Department of Journalism in Tilburg, the Netherlands. He is the author of several books and articles on media and communication ethics, on intercultural journalism and intercultural competences for journalists and broadcasters. He is a member of the Dutch Press Council.

You underlined that ethics begins in the newsroom. How would you interpret that?

I think that in the newsroom, in the conversation between journalists is from where media ethics should begin. It is not a matter of Code of Ethics or Press Council and all that stuff. It is important but not that important; much more important are all the decisions made in daily practice: the discussions between journalists, decisions of the editorial staff, transparency procedures of the newsroom. The newsroom is the smallest center of journalism and journalism ethics. There is where it must start.

The main news and current affairs program in the Netherlands, the daily news program on television in the Netherlands, their journalists, they do that. They have their own chat sessions and they have their own editorial blogs to explain to their viewers their decisions and their daily work. It is a matter of transparency; it is a matter of explaining to the public how you work and why you did it this way. Not every person in the audience wants to hear it, I know that, but a lot of people are interested in it. And there are chat sessions on internet TV between representatives of the audience and journalists. Sometimes the audience posts questions and the journalist asks the questions to his colleague sitting next to him and that person gives an explanation of what he has done and why he has done it this way, etc.

How does social media affect overall media ethics? How has ethics changed because of that?

There are a lot of new questions in online journalism: should there be new ethical guidelines or not? Should there be an ethics code for internet journalism or not? That is a discussion [that is taking place] in all countries. And there is another aspect: the individual journalist who uses social media like Twitter to get in touch with his public, to get ideas from his public, to ask his public what they think about his report, etc.

Recently in Armenia, there have been discussions on cases where journalists cite comments and posts from social media sites and blogs in their articles. Can you comment on the ethical aspect of this issue?

Yes, of course! In my opinion this is a huge ethical issue. As those persons gave no consent to use their quotations. The journalist uses these quotations without asking the person involved and according to the Press Council in which I belong, this is not allowed. The fact that quotes or pictures are publicly available does not mean that journalists can use it every time they want.