“With the use of media you can change the world” 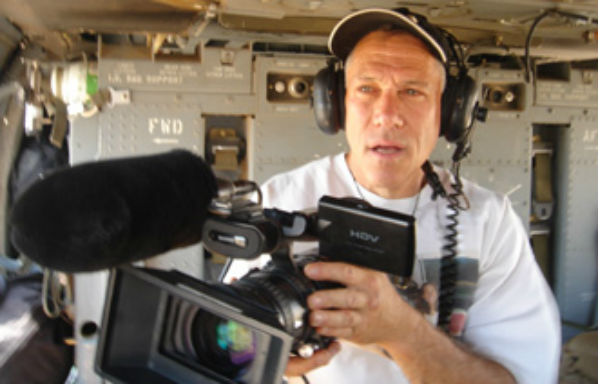 Over the course of his career, Alpert has won 15 Emmy and 3 DuPont-Columbia Awards.

The change is that the equipment is so much better and friendlier. The cameras can see in the dark. There are wireless microphones that can transmit good audio back to your camera. These were the terrible problems that we had to deal with. The cameras are not very inexpensive now and the technology has actually become democratic.

The media has allowed ordinary people to have the means to record and transmit things. Even your cell phone takes better pictures than the old cameras that we had to use 4 years ago. The cameras that we were using in those days cost $75,000 USD. As a result, very few people had cameras. You needed lights and so on, and they were very heavy. And now everybody is carrying around in their pocket a camera that’s better than the cameras that we professionals used in those days.

How has the Internet and video-sharing websites, in particular, changed documentary storytelling?

In the United States there were 3 major television networks and they controlled television. And if you were not able to get one of them to broadcast your films, nobody saw it. And now you can take your telephone and film something and then you can put it on Internet and everybody can see it. And this is an absolute revolution; nobody knows where it’s going, but it has lots of opportunities that didn’t exist previously.

The Internet gives opportunities to filmmakers to have people see their work that didn’t exist before. That’s very good. The bad thing is that there is a lot of noise out there now, cause many people are doing it. When there were only a few ways to see things and you were lucky enough to get your report seen, everybody saw it and everybody talked about it. Now everybody is talking at the same time. Sometimes it’s hard even for very good reports to cut through all this noise and for people to see them.

And the other thing is that most of these new ways of getting your report out have no income coming back for the filmmaker or the reporter. So when you work for the TV station you know your reports are going to be seen and you know that somebody is going to buy your breakfast, lunch and dinner.

And now who’s going to pay your rent? And where are you going to eat? Yes, your report is on the Internet, but you’re basically working for free. So this is the type of economic and technological situation.. Also it’s harder for older people to understand this new technology. We are smart enough to know that it is important and that it is going to change the world, but it’s the young people who are going to change, not me.

What are the ethical challenges in your work and how do you handle them?

Everybody is trying to influence the media, because the media is really important. That’s where everybody gets their information. And especially in democratic society or the society that wants to be more democratic, the role of reporters is crucial. So since your mother, brother and sister are going to rely on your information, you have to do a good job to make sure that it’s the truth. And since most people are good people, when they have truthful information, they will make good decisions.

But when the information they get is incorrect, they can make bad decisions. And I’ve seen this in my country that we have gone to war with bad information. For example when we went to war against Iraq, the government and some reporters spread stories that weren’t true, that Saddam Hussein had weapons of mass destruction and he was going to use them to attack the United States. And they (the government and the reporters) also used the anger that the American people felt about the 9/11 attack. And somehow they managed to link this to Saddam Hussein. And he had nothing to do with it.

There were no weapons of mass destruction. Thousands of people have been killed in Iraq. Saddam Hussein has gone, which is great. He was a terrible guy; he was a bad ruler; he was bad for his people. But the reporters didn’t do a good job at the beginning of that war. And as a result many people have suffered. And often times it’s only reporters who can help the society do the right thing, because it’s their job to present the real truth and not an opinion, so that people can make the right decisions.

What is the most amazing thing you’ve learned while working in documentary filmmaking?

The most amazing thing is that just a regular, really ordinary person like me with the use of media can change not only the little world around him, but also the big world. And that has been the most amazing thing for me. I never expected this to happen. And when it did happen I was more surprised than anybody else. And even though I understand how it works, it always amazes me and makes me excited, because this is what I really want to do. And the fact that I can do this every day is like I’m living in a miracle world.

The United States has been involved in a lot of wars. And especially in these wars it’s difficult for American people to get information. The wars were very far away, and it was very difficult for the reporters to get to the wars. I think the most important thing that I’ve been doing for the last 10 years is that I’ve been helping the American people to understand what war is like, what happens in the world, and who pays the price.