On December 5, local self-government bodies will be elected in 36 communities of Armenia. According to the information received by Media.am, school employees are appearing in the lists of candidates of the ruling “Civil Contract” party. We checked this information and discovered that the government really is using this administrative resource.

There are many publications in Armenia about the use of the administrative lever of public schools by the previous government, the “Republican Party of Armenia.” Teachers would appear in the lists of political forces and collect lists of voters in favor of that force.

To find out how true the information we received about the new government is, we have selected the list of candidates of the “Civil Contract” (CC) party for the December 5 local elections from the website of the Central Electoral Commission.

We found that out of 36 communities, only one political force has been nominated in Armavir, the CC. The ruling power is not represented only in the city of Sevan in the Gegharkunik region.

In 192 or about 12.7% of the 1,513 CC candidates nominated in all these communities (including those who were excluded from the list for one reason or another), the place of work is indicated as a school. About 71% of these individuals are members of the ruling party, about 29% are non-partisan, and one is a member of the United Labor Party.

Almost the same number of school staff are included in the lists of other forces nominated in the local elections to be held on December 5. In these communities, about 2,845 candidates have been nominated from other political forces (including those excluded from the list for one reason or another). Only 200 or about 7% of them have noted a school as their place of work.

The director of Kosh secondary school of the Aragatsotn region, non-partisan Ruzanna Vahani Tonoyan (born 04/09/1967), cooperated with different forces. Tonoyan, as a representative of the “Prosperous Armenia” party in the 2012 elections, was the chairman of the 15/1 precinct electoral commission of the Kosh community.

And in 2017, in the National Assembly elections, she was included in the list of the “Armenian Revolutionary Federation” party. As can be seen in the video of RFE/RL, she involved schoolchildren and teachers in the pre-election campaign.


“In the Kosh community of Aragatsotn region today, aside from the villagers, a large group of schoolchildren was waiting for Levon Mkrtchyan, the candidate for deputy included in the ARF national list, and Minister of Education and Science. The children were holding ARF booklets and the campaign leaflet of one of the regional list candidates, Ruzanna Tonoyan, who, as it turned out, is the school principal,” the narrator said in the video.

Nelli Melkoni Nasoyan (born 6/09/1958), the director of the school after Khrimyan Hayrik in the village of Voskehat in the Aragatsotn region, is now a member of the “Civil Contract” party. She was previously included in the list of the Aragatsotn regional center of the “Republican Party of Armenia” as a representative of the Voskehat headquarters.

In 2015, the students of Nasoyan’s school greeted the “honorary guests” who had come to P. Proshyan’s house museum to take part in the event celebrated with great pomp and ceremony on the 25th anniversary of the RPA’s founding.

Koryun Kyaram Khachatryan (born 03/02/1953), the deputy principal of Yeranos School No. 2 in the Gegharkunik region, is now a member of the ruling party. In 2016, he was nominated as a member of the Yeranos community council and was elected by the list of the then ruling RPA. 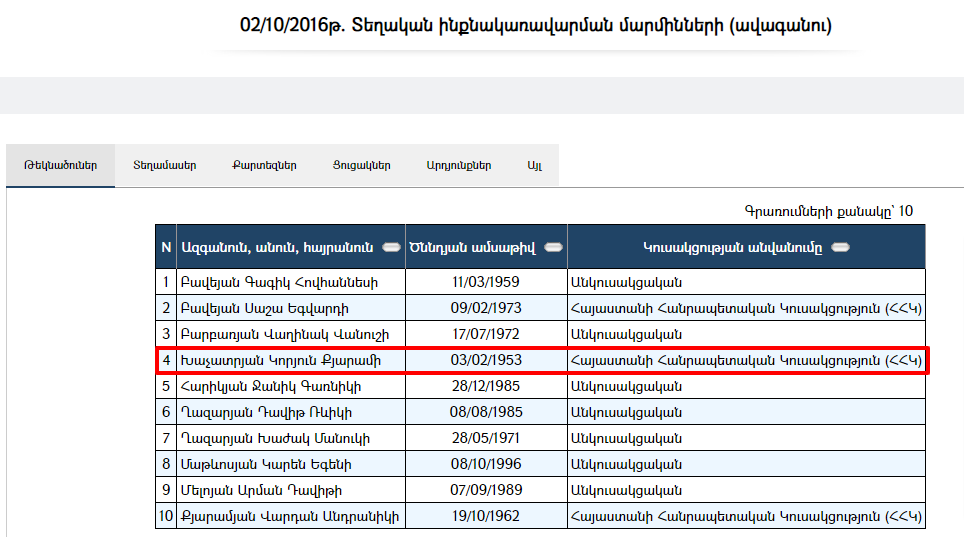 It turns out that the alarm received by media.am is grounded. In the local elections to be held on December 5, there are almost as many school representatives on the CC list as the school staff of other forces combined. At least 3 of these 192 people were previously members of other political forces.