Is Your Money In Danger? Residents Of Armenia Receive Calls From Fake Bank Employees 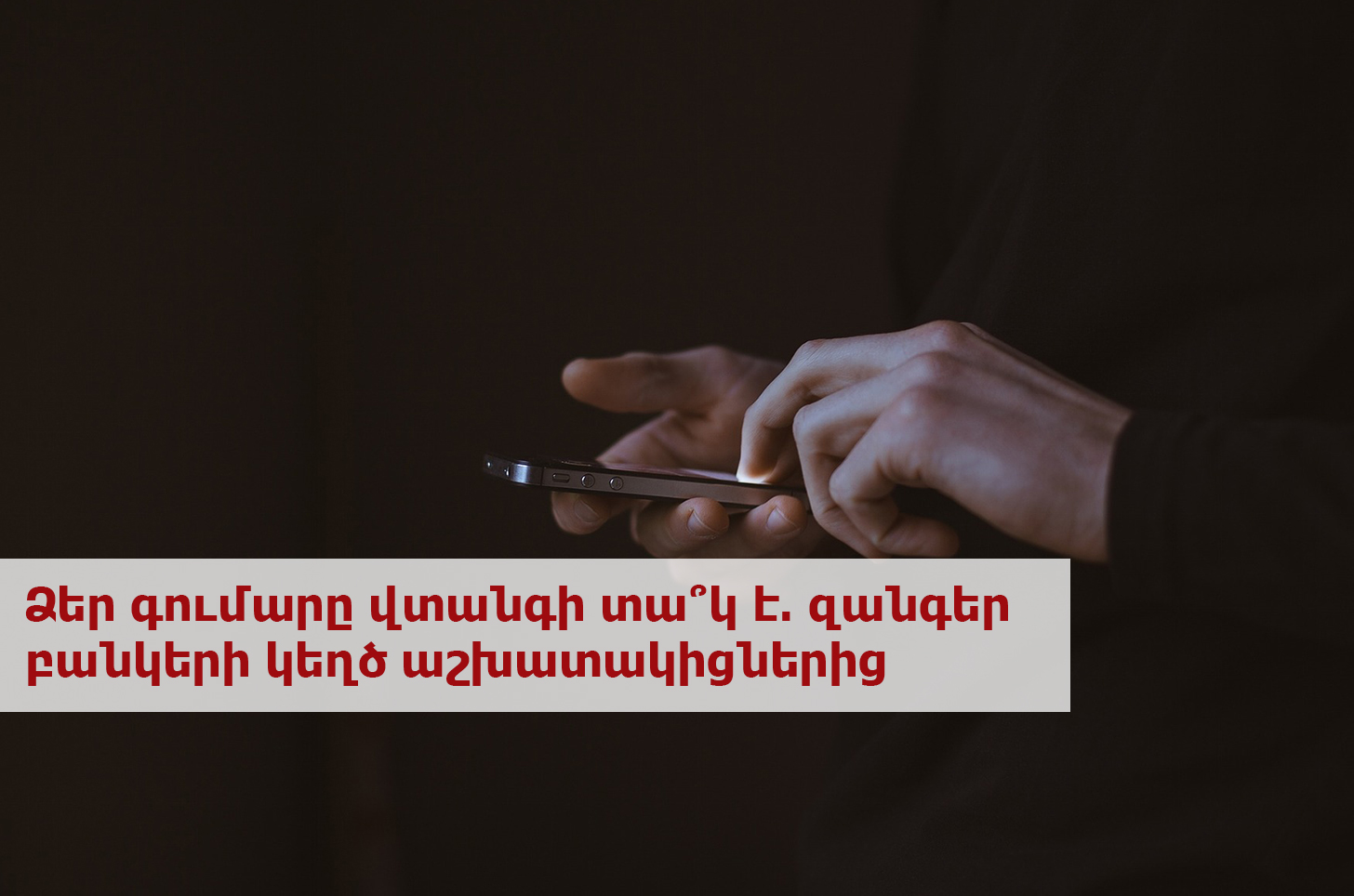 In the first few days of October, cases of telephone fraud took place in Armenia, when criminals, posing as bank employees, tried to extort money from people.

Media.am explains the scheme these criminals operate with, as well as how to protect yourself from them.

How does the fraud scheme work?

In early October, math teacher Lyudmila Hayrapetyan received a call from an unknown number, a man named Armen. “He said, ‘Lyudmila, is that you?’ I said yes (in Russian) and he asked for my card number, I was kind of surprised, he was giving the name of the bank,” Lyudmila told Media.am. She did not answer the questions and hung up. “In less than a second they called on Viber,” said Lyudmila, “This time on Viber, a call came from a different number, one that started with +3… and a lot of numbers.”

In another case, the caller, speaking in Russian again, introduced herself as an employee of VTB Bank. “The speaker was a girl, she spoke Russian, but she understood Armenian,” said resident Jenny Ghazaryan. She received a call with an unknown code number: +374 15 …. “She said she is an employee of VTB Bank, and asked if I have made a transaction with more than 1,000 AMD in recent days?” I said no and that I use Ardshinbank. She said, “Okay, then did you do so with Ardshin?”

Receiving an affirmative answer, Jenny’s interlocutor claimed that there were problems with the bank account. “She asked, ‘Do you have your card?’ I said no, she asked if I had a mobile application, I told her that it does not work. She asked, ‘How much money do you have on the card?’ I told her that I do not remember. She was silent for a moment, I asked ‘What do you want and why have you called?’ but she hung up.”

These two cases are similar. The callers introduce themselves as bank employees, speak Russian and try to persuade the interlocutor to provide them with their bank card or account information.

Similar scams, called vishing, are widespread throughout the world. Recently, they often occur in different post-Soviet countries. For example, in recent months, many Estonians have been receiving calls almost daily from Russian-speaking people who introduce themselves as bank employees and claim that their interlocutor has a problem with their accounts and must provide bank details.

Estonian police reported that in the first half of 2021, criminals were able to steal about 2 million euros from residents. And during the first three days of October alone, the residents lost about 50,000 euros. The criminals, in all probability, were calling from abroad, but the police could not find out from which country.

In July, in another post-Soviet country, Ukraine, law enforcement officers discovered a criminal group that extorted money from residents through calls. Residents of not only Ukraine but also Belarus, Poland, Russia and Moldova suffered from the group’s activities.

How to protect yourself from fraud?

Phone fraudsters generally use simple (but effective) tricks. It is important to remember:

🔴 Criminals try to scare you. They claim that there is a problem with your account, that your finances are in jeopardy, and they try to extract information by taking advantage of your depressed or confused state.

🔴 Vishing calls can be from various phone numbers, even from a real bank phone number. These numbers can be falsified. That is, the number you see on your phone screen may have nothing to do with the caller’s actual phone number.

🔴 The criminals probably do not know which bank you are using. They simply choose the largest banks and present themselves as their employees, hoping that the interlocutor will be their customer.

🔴 Fraudsters can sometimes seem very persuasive, talking to you for a long time, trying to gain your trust. But keep in mind that real bank employees never ask you to provide them with your account numbers and PINs over the phone. If you have any doubts or concerns, call or visit your bank yourself.

🔴 Do not pass on personal information over the phone to a stranger. If the criminals learn your bank details, they can quickly and easily seize your money.

What should you do if you have given your bank details to criminals?

In a conversation with Media.am, Hayk Mkrtchyan, Head of the High Tech Crimes Department of the Police, mentioned that if you provided bank details to the caller during a vishing phone call, you should contact your bank as soon as possible so that the bank blocks the card. Mkrtchyan also added, “If the citizen provided the card numbers and money was taken from them, then they must also apply to the law enforcement bodies because what happened is already a theft under Article 181 of the Criminal Code.”

Frauds, both over the phone and over the Internet, are common. In 2020, Media.am wrote about fake pages operating on social networks, which were able to get the bank details of many Armenian users by writing messages on behalf of Kim Kardashian.