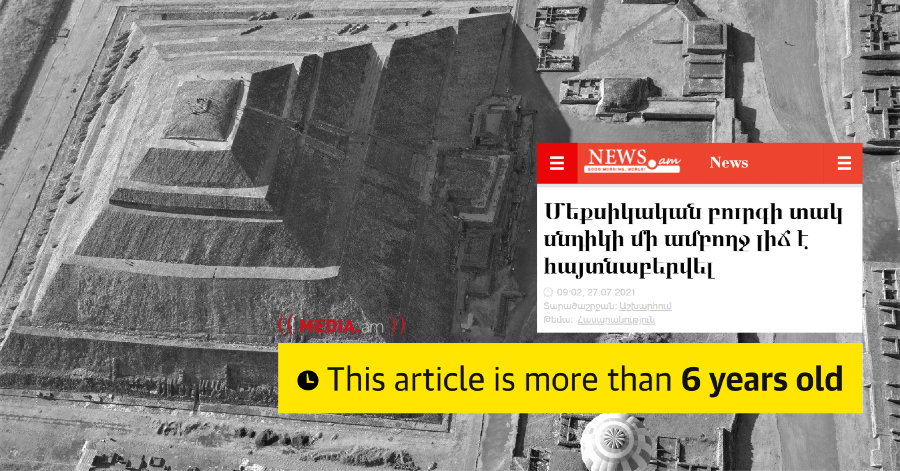 News.am published a news item on July 27 with the headline “An Entire Lake of Mercury Was Discovered Under a Mexican Pyramid.” It reports on how Mexican researchers discovered a whole lake of mercury while studying the entrails of the “Feathered Serpent.” The pyramid mentioned in the article was built in ancient times by the followers of the Quetzalcoatl cult. Archaeologist Sergio Gomez, who led the expedition, said that excavations prior to the discovery of mercury had taken six years and that they now had to use additional security measures to protect themselves from the toxic substance. Mercury was found moving through a tunnel created 1800 years ago, where there were cells, and in them, many rare artifacts.

The news about the archeological discovery in the Armenian section of News.am is the same translation of a Planet Today article published on July 26, and in the Russian section of the Armenian website, it is simply a direct copy. By the way, the “copy-paste” chain was continued by Slaq.am, which copied the translation of the News.am article and posted it on their own page.

At the top of the article, The Guardian warns its readers that it has been around for more than 6 years.

The problem with the news, which at first sight has no relevance and importance, is that it is not news at all and is more than 6 years old. The discovery of liquid mercury under the Mexican pyramid was reported by the authoritative British online magazine The Guardian. The rather extensive piece by Alan Yuhas was published on April 24, 2015.

Regardless of the title, which is about the discovery of liquid mercury, the main emphasis in the Guardian article is not on it at all, as reported by Planet-Today and translated by News.am. Here they report on how Mexican explorer Sergio Gomez found a tunnel under an ancient Mexican pyramid with a large amount of liquid mercury at the end. Most importantly, they mention how the discovery could lead to the tomb or ritual room of one of the leaders of the Quetzalcoatl cult. This in turn could help to form a more accurate picture of the times of their existence (100-700 A.D.) thereby supplementing the lack of information. Planet Today did not write about this most important aspect.

The old news presented as new news on the Russian website, which distorted the real facts, made it out to be shocking and exclusive, the emphasis of which is both inappropriate and unfounded. There are no such thoughts in the original material.

“Where did the Mayans get the mercury, which is stored in large quantities under the pyramid? The answer to this question is not easy․․․” It is with this sentence that the authors contradict their idea, which was given at the beginning of the article, where it is said, “Surprisingly, mercury is quite common under ancient cemeteries, so the mercury lake under the Quetzalcoatl pyramid did not surprise scientists.”

Both American and Russian authoritative periodicals wrote about the discovery of mercury under the pyramid in 2015.

The Guardian revisited the issue on September 24, 2017, calling the discovery of archaeologist Gomez “lakes, rivers of mercury,” but not for their size and volume, but for the idea and what possible significance it had for the peoples of Mexican civilization.

It turns out that the Russian Planet Today translated old news without mentioning it, although The Guardian at the beginning of the article specifically warns about the outdatedness of the material, and the Armenian website, in its turn, translated it without verifying the source.