Misconceptions About The Number Of Victims In Azerbaijan 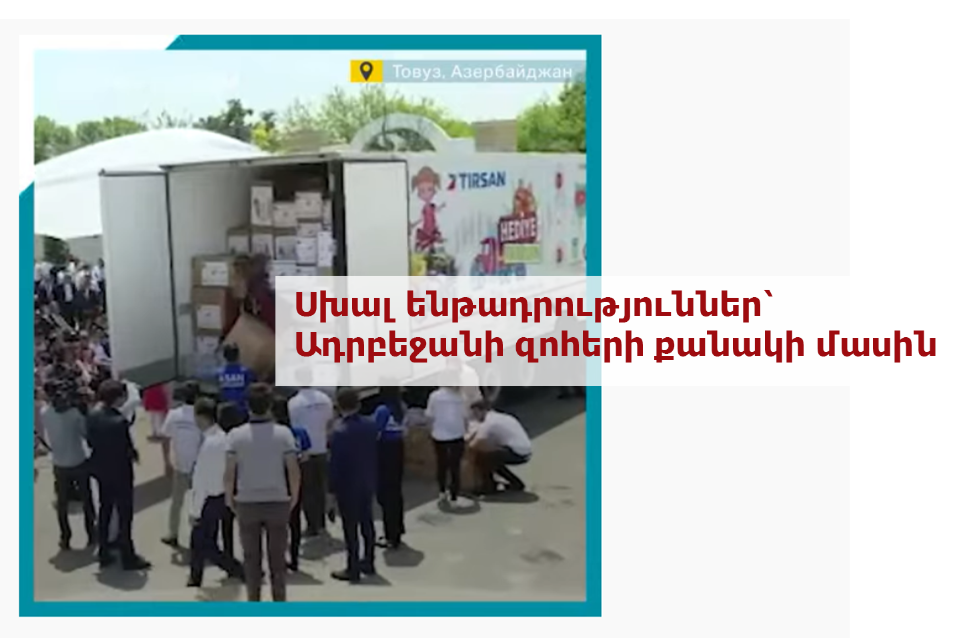 Blognews.am wrote today that Turkey has admitted that the Azerbaijani side lost about 6,000 soldiers in the 2020 Artsakh war.

“Turkey acknowledged that in the September-November 2020 war, the Azerbaijani side lost about 6,000 troops in the Artsakh (Karabakh) war. Be sure that the losses of the Turkish-Azerbaijani tandem are much bigger. In time, the real indicator will be revealed,” the article states.

As proof, screenshots of messages of the Turkish side were published, in which it is mentioned “Turkey has sent a caravan of gifts to the children of martyrs (killed soldiers) to Azerbaijan. The gifts are received by the families of 6,000 servicemen killed in the 44-day war for the liberation of Karabakh.” 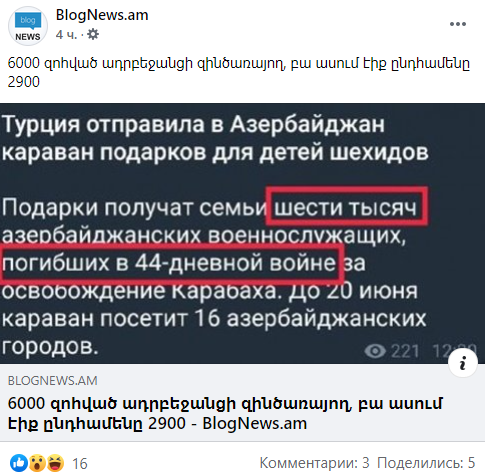 Taking into account that the gifts were distributed to 6,000 families, the author of the article concluded that the number of victims was exactly that, and the Azerbaijani leadership lied by claiming that the number was 2,900.

The message is incompletely quoted

* Examining the message spread by the Turkish state news agency TRT last night, we see that the message was edited shortly after its publication, it is the initial version of the text in the screenshot published on Blognews.am. The amended version of the statement shows that the donation was made not only to the families of the servicemen killed in the Artsakh war but also to the wounded. The Armenian news site published the article more than 10 hours after the editing but did not mention that it quoted the unedited part and did not warn that the text had been edited.

The message was later edited again. According to the TRT Telegram channel, the number 6,000 refers to the children of soldiers killed and wounded in the war, who received gifts. 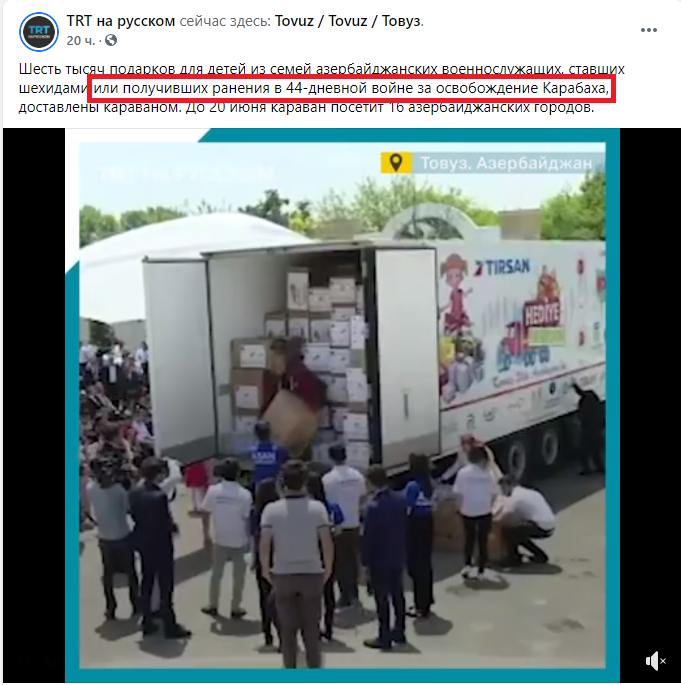 As for the number of victims on the Azerbaijani side in the Second Artsakh War, it should be noted that yesterday the Ministry of Defense of Azerbaijan issued a statement informing about 2,900 servicemen killed in the war and 14 missing.

Hayk Khachikyan, a military analyst at Razm.info, says that the number of 2,900 announced by the Azerbaijani Defense Ministry and the data collected by them from open sources largely coincide.

“Of course, they have hidden losses, at least we have proof of that, but they are not published in a significant number more than the official number. It is difficult to say the exact number at this moment, as the calculation process is continuous, some adjustments are needed. But my main idea is that it is not the case that the data of Razm.info are very different from the published ones.”

According to Hayk, their data are obtained exclusively from open sources and are confirmed by facts. “When we say that there is a dead soldier, it means that there is a photo from that loss, there is a name, in some cases a month-date of birth, a unit where they served, that is, information that gives the whole picture. However, it is important to note that of the Azerbaijani departments, only the Ministry of Defense published a list, but it wasn’t only the Ministry of Defense that took part in the war on behalf of the army. The State Border Guard Service, the Ministry of Internal Affairs with internal troops, and the Foreign Intelligence Service subdivision also participated. These departments have not published such a list.”

Thus, the donation of the Turkish side to the 6,000 families of Azerbaijan does not mean that the data published by the Ministry of Defense of Azerbaijan about 2,900 victims is wrong. The announcement is quoted incompletely. The full statement mentions the families of servicemen killed and wounded in the war.

* This paragraph of the article was edited in 2021, on June 4. The initial version did not mention that the TRT message was edited shortly after its publication.