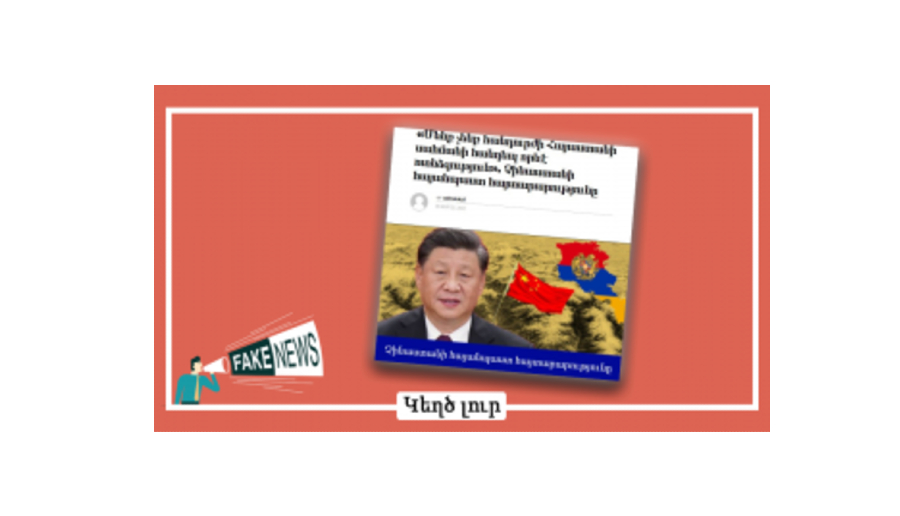 A number of clickbait sites such as Fb-news.online, edit.am, life-episode.ru, jamanak.ru and others, have distorted the statement of Chinese MFA regarding the situation on the border of Armenia and Azerbaijan. Specifically, those websites claim that a pro-Armenian announcement and even an offer of help has been made. None of those claims, however, have been officially pronounced in Beijing.

What are the clickbait sites writing?

On the 25th of May a number of clickbait sites wrote that Zhao Lijian, the spokesperson of the Ministry of Foreign Affairs of China, has stated that the official Beijing hopes that Armenia and Azerbaijan will be able to resolve their disagreements and differences through peaceful negotiations.

Lijian, according to those websites, has said that if the situation cannot be peacefully resolved Beijing will aid Yerevan, because of the friendly relationship and the trading connections that exist between China and Armenia. He has also stated that countries which are part of International organizations and the UN conventions, but fail to abide by their laws, have to be punished for this attitude, otherwise they become a “threat for the entire region and the whole world.”

“Besides stating this truth, we will also do our job of protecting the official borders of the Armenian Republic. And by doing so, we will prevent Erdogan’s concept of enlarging Turkey from coming to life.” – has announced Lijian, according to clickbait sites.

The pro-Armenian statement cannot be found in the primary sources that the clickbait sites claim to have used as their sources.

The source of jamanak.ru was, for example, another clickbait site Fb-news.online, which cited factor.am, which, in its turn used rossaprimavera.ru’s information, whose primary source was RIA Novosti. The pro-Armenian statement, however, could not be found anywhere in the original sources: factor.am, rossaprimavera.ru and RIA Novosti.

The false information was spread on a number of Facebook groups and pages. According to CrowdTangle, these posts have received more than 14 thousand likes and reactions. 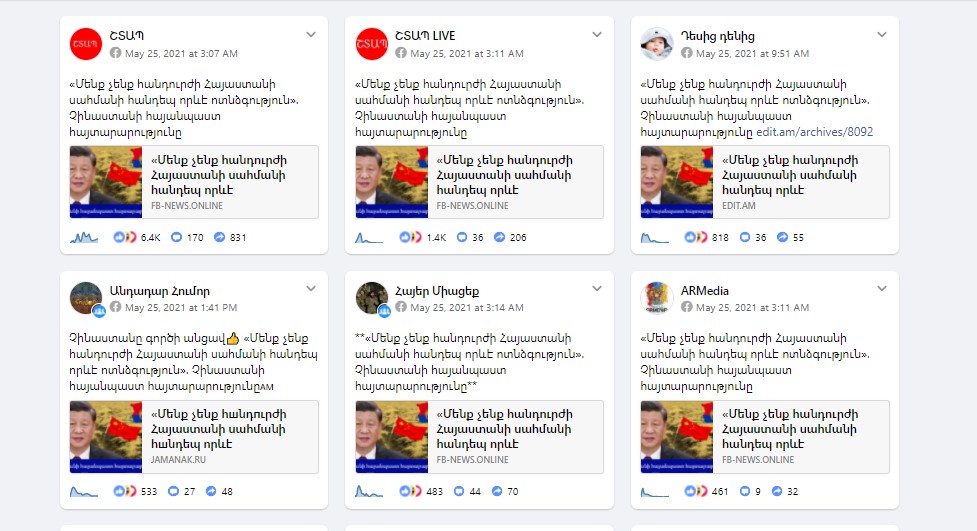 What has the representative of the Chinese MFA actually said and done?

The statement, regarding the situation on Armenian-Azerbaijani border, that the Chinese MFA press secretary Zhao Lijian has made during a press conference on May 24th, is available on the website of the Chinese Ministry of Foreign Affairs.

Lijian has given a neutral answer to the question raised by Shenzen TV, about the Armenian-Azerbaijani situation. Specifically, his idea was that both Armenia and Azerbaijan are friendly partner countries for China. “It is our sincere hope that the two sides resolve their differences and disagreements through dialogue and consultation and jointly safeguard regional peace and stability so that people can live in tranquility.”

Thus follows, that clickbait sites have ascribed pro-Armenian statement to the representative of the Chinese Ministry of Foreign Affairs, even though neither in their primary sources, nor in the representative’s statement itself, no such claims were made.