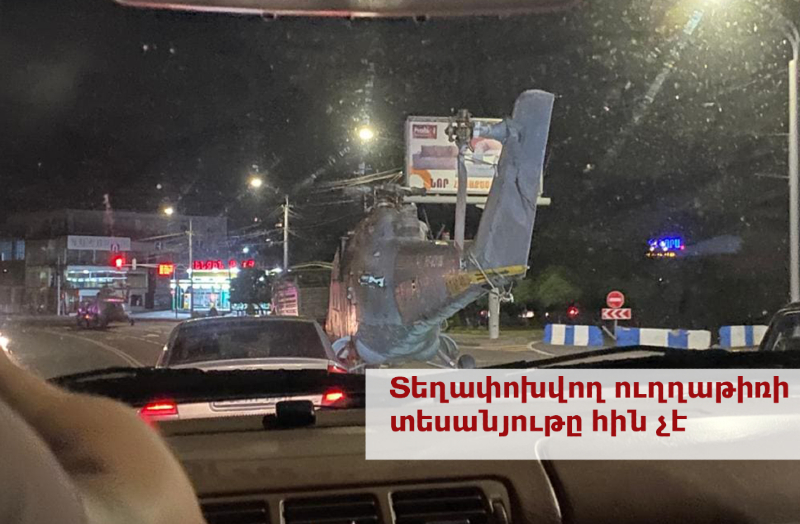 The video of the helicopter moving through the streets of Yerevan on the evening of May 27 was widely spread in the media. Lurer.com was the first to write about it, publishing photos and a 10-second video showing the helicopter being transported by a tractor.

A number of users expressed doubts about the authenticity of the video and photo. It was mentioned that the scenes were old. Some wrote that they were taken in September 2020, during the 44-day war, while others claimed that the footage was from December.

The video of the helicopter being towed through the streets of Yerevan in December 2020 really was spread. It appeared in the media after a photo was published by the chairman of the Civic Consciousness NGO Narek Samsonyan, then the Mediaport Telegram channel wrote about it, attaching a video.

The RA Ministry of Defense later responded to the photo spread in those days, noting in a conversation with “Haykakan Zhamanak” that the helicopter is Russian, belongs to the Russian 102nd military base, the Russian side was carrying out a planned transfer.

The video is not old

Comparing the photos and videos taken yesterday and December 2020, we understand that they are different, taken from different cars, on different streets.

The Ministry of Defense also confirms that the video is new

In a conversation with Media.am, the RA Ministry of Defense said that the video was not old. A transfer was really made a few days ago. The department also informed that the helicopter belongs to the Russian 102nd military base.