How Did The News About The Border Situation Develop?

As reported by Newspress.am, the Armenian media field was filled with information today that battles are taking place in the direction of Ishkhanasar in the Syunik region. The newspaper wrote that the enemy had initiated an attack, those who were wounded on the Armenian side were being evacuated. The media checked the information from the current and former regional and community authorities. They spread new and old images.

Media.am summed up the information flow.

Who said what about the border situation?

The Newspress.am news was spread by a number of news outlets: irakanum.am, Alternativ.am, hayeli.am, henaran.am and others. Singer Sofi Mkheyan, who has a large audience, wrote about this on her social network pages.

Then hraparak.am wrote that the enemy managed to advance a little in the Jermuk area, also near the village of Khnatsakh in the Tegh community. According to the information received by the news site, the armed forces did almost nothing in those places, “everything has been left on the shoulders of the locals and community leaders.”

Referring to the Mediaport Telegram channel, the media started talking about warning men to volunteer in Goris, Kapan and Meghri. According to the channel, the Vanadzor city military unit is being promoted by an “alarm” order.

Then Hraparak.am warned that troops were being taken from the Lusakert military unit to Syunik for help. The photo attached to the article was spread on social networks as proof of what was said. Many criticized Hraparak.am for filming the movement of troops and contacted the RA Police and NSS. 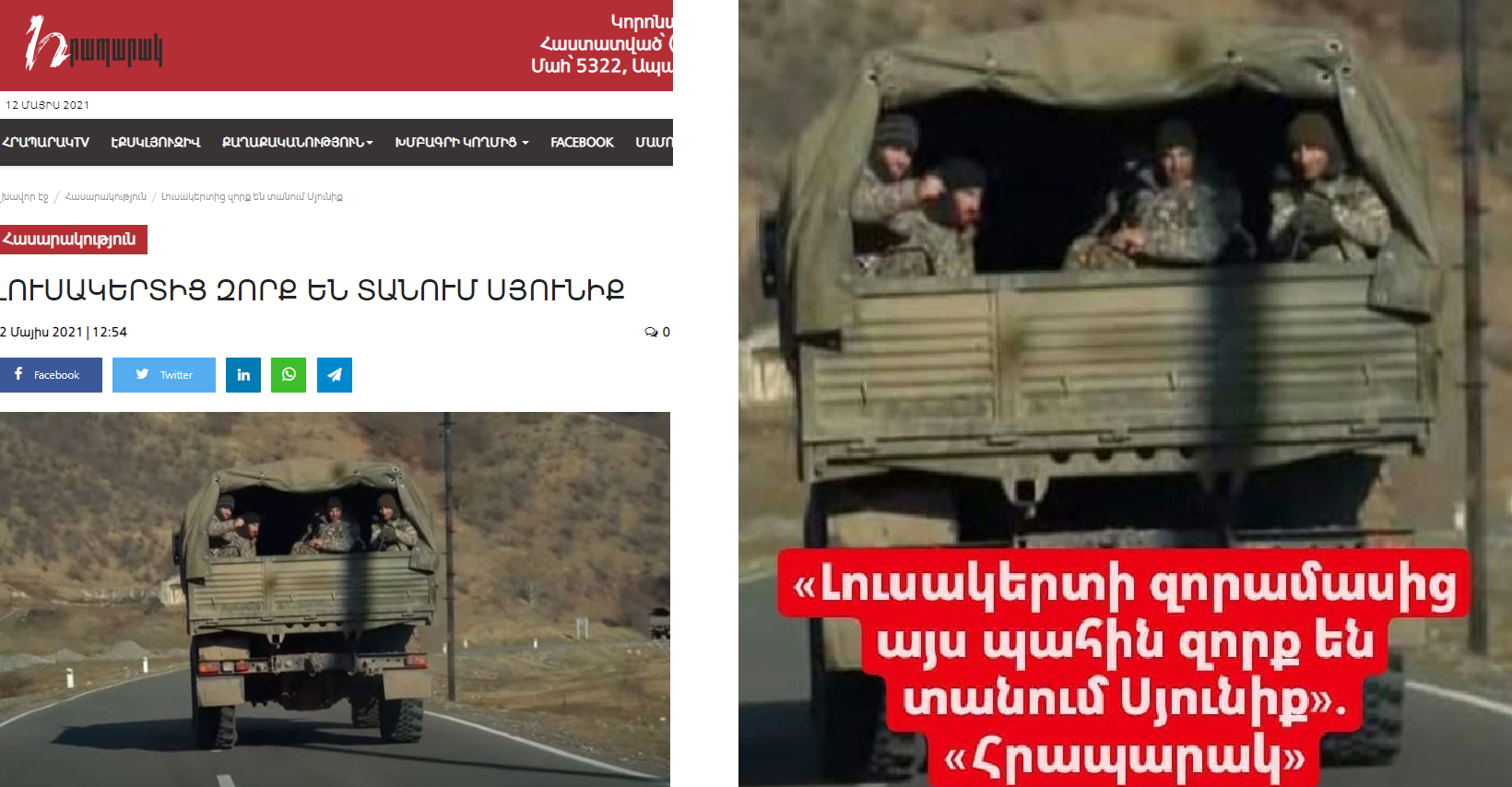 The photo that accompanied the news was old․ This shot was taken from a video released by AFP in November 2020. The site later updated the news: The caption added that the used picture is from an archive. The absence of the PS. can be seen here. 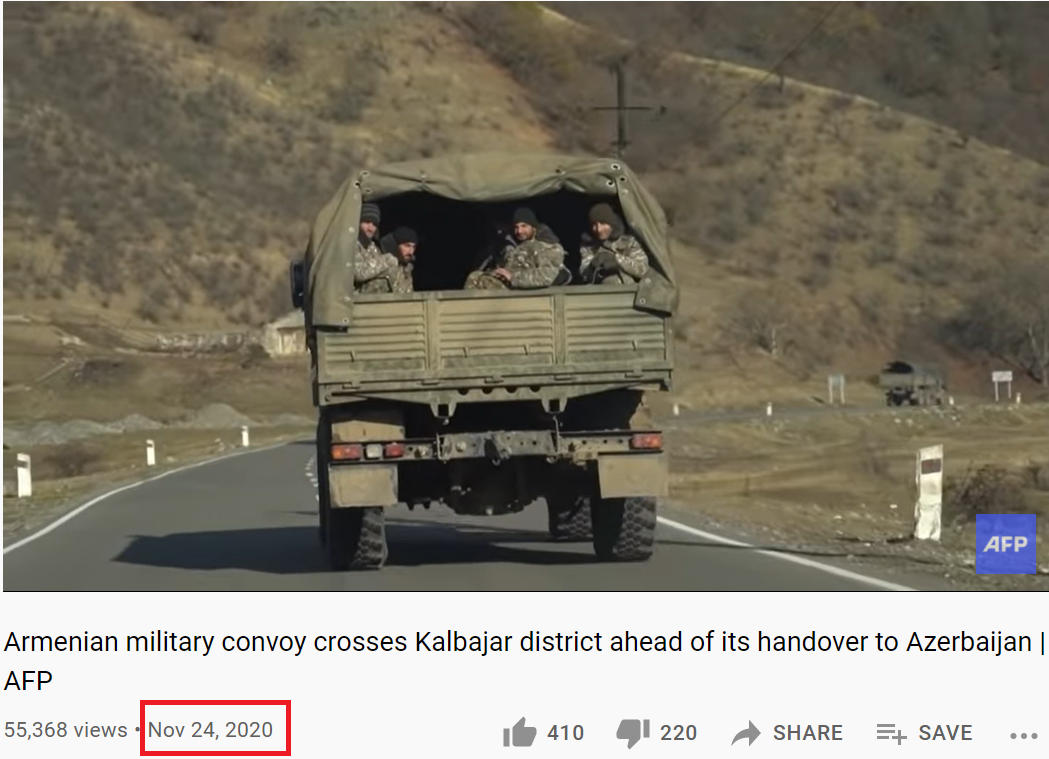 Tert.am published a video of the movement of troops.

Armlur.am talked to Vahe Hakobyan, the former governor of Syunik, the leader of the “Reviving Armenia” party, who in his turn noted that according to his information, the Armenian side has one wounded and that “the base is under blockade.”

Analitik.am contacted the Vayots Dzor regional administration, where they reported that there had been no incident, the information was false. It was also clarified that the Armenian forces held a training exercise near Ishkhanasar and that the shootings probably became a topic of conversation.

But the deputy mayor of Goris, Menua Hovsepyan, confirmed in a conversation with “Radiolur” that the Azeris came to the territory of Black Lake and tried to settle there. Black Lake is located on the Armenia-Azerbaijan border, it is 18 km away from Verishen village. 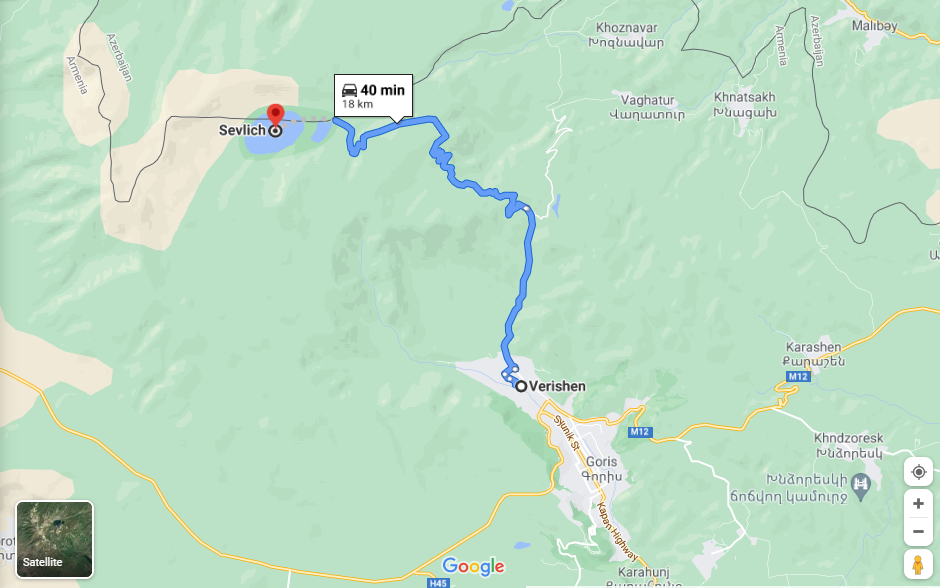 According to Hovsepyan, at the moment of the conversation, the 1st Army Corps is holding negotiations so that the Azerbaijani forces can return to the positions envisaged by the map.

The administrative head of Ishkhanasar community, Marat Petrosyan, told Media.am that no battles are taking place, the enemy is very far, 40-50 km. He also denied the news we had and later confirmed that the Azerbaijanis had come forward towards the lake.

At the same time, an anonymous officer told hraparak.am, “Azerbaijanis control all pastures, fields and roads. They can strike at any moment.”

Later, using footage from the 44-day war, Ipress.am wrote that according to their information, there was an attack by the Azerbaijanis in the direction of the Vardenis community of the Gegharkunik region. One position was occupied.

Blognews.am, referring to the Facebook user’s post, wrote that these processes are beneficial for RA Prime Minister Nikol Pashinyan. There is a good opportunity to impose martial law and cancel the elections.

No shootings or fighting took place in Ishkhanasar

During this period, the Ministry of Defense left the calls of the media unanswered, including media.am, as a result of which the sometimes contradictory information was spread with viral speed by anonymous sources or local government bodies.

Only later did the Ministry of Defense issue a press release. The ministry confirmed the news that in the early morning of May 12, the Azerbaijani armed forces, on the grounds of “border adjustment,” tried to carry out certain work in one of the border areas of Syunik. However, he added that after the measures taken by the Armenian subdivisions, the Azerbaijani military stopped the work and negotiations are underway. The Ministry of Defense denied the news that battles were taking place in Ishkhanasar.

The NSS also issued a warning call, demanding that the media not spread false information that hostilities were taking place at the border.

The situation in Lusakert and other military units

In a conversation with tert.am, Colonel Samvel Asatryan, Head of the Information Department of the Administrative Department of the General Staff, noted that the 3rd Army Corps, according to the 2021 year plan, is conducting military exercises. The Military Control Service of the Ministry of Defense of Armenia carries out combat readiness inspections in Lusakert and other military units.

The situation in the communities of Jermuk and Tegh

In a conversation with Infocom, the mayor of Jermuk, Vardan Hovhannisyan, said that the opponent had not made any progress in Jermuk. “…. In connection with Jermuk, I can say that there was no problem, the sanatoriums are working, the people are peaceful ․․․ I have not received any alarm that there is such a problem. We learned from the message of the Ministry of Defense, from the news, that it seems that there were some developments on the side of Syunik, but not in Jermuk.”

Hraparak.am also reported that the enemy managed to advance a little near the village of Khnatsakh in the Tegh community. In a conversation with Infocom, the head of the Tegh community of the Syunik region, Nerses Shadunts, denied that news․ “The information is not correct, we are doing our job normally, do not worry.”

The situation in Gegharkunik

Gegharkunik Governor Gnel Sanosyan, in his turn, provided details on the border situation in the region. The governor told Armenpress, “At the moment, they are carrying out positioning works. In some suspicious areas, the adjustments are being agreed upon with the Armenian guards. The situation is under the control of the Armenian armed forces.” According to Sanosyan, it is about the territories under the control of Azerbaijan within the trilateral statement, where the enemy was supposed to be positioned but was not able to do so due to unfavorable weather conditions.

The news about voluntary enlistment is also denied

In a conversation with Infocom, Kapan Mayor, Gevorg Parsyan, denied the information that men in Kapan had been instructed to be ready to volunteer.