Was The Bruise A Result Of The Vaccine? Unlikely.

In recent days, a photo has been circulating on social networks, in which you can see a bruise coupled with swelling that according to those spreading the photo, were the result of being vaccinated with AstraZeneca. The author of the photo is unknown. No additional information about the incident is known.

Media.am turned to three specialists, an epidemiologist, a traumatologist and a dermatologist, to find out if the bruise seen in the photo could be the result of a vaccination.

Who shared the photo?

One of the first to spread the photo on the Armenian domain of Facebook was the user “Vardan Vardan” who actively made posts on religious topics. He also saw this topic in a religious context: He tagged the page of the Ministry of Health to the picture and wrote, “Next AstraZeneca. Those who are no different from the murderous Turk will be judged by the judgment of God.” The post is no longer available.

In the comments to the post, he was asked if the case was registered in Armenia. A search of the posted picture reveals that it was not. The picture has been spread on the Internet since April 8 of this year. Users claimed it was the result of the AstraZeneca vaccination. 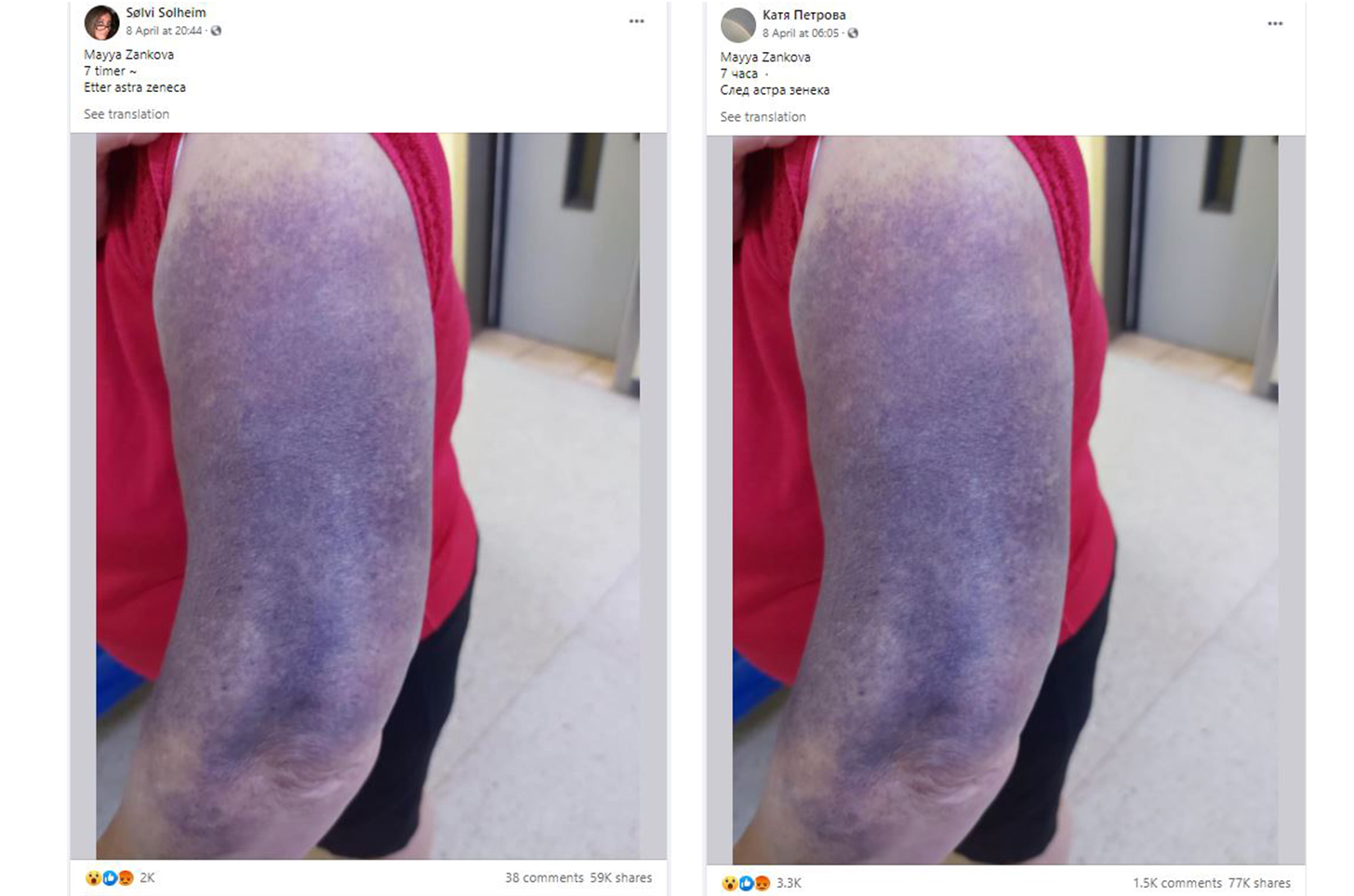 These posts have reached a wide audience․ In the first case, it was shared by 77 thousand users, in the second case, 58 thousand. But not everyone was in a hurry to believe the information․ In the comments, the vaccinated users posted their photos without injuries.

Several doctors told media.am that it is impossible to imagine such a reaction from a vaccine

To find out if it is possible to get such an injury from the vaccine, we talked to a traumatologist, dermatologist and epidemiologist. We showed the photo to the doctors․ All the specialists told media.am independently that it is impossible to imagine such a reaction from a vaccine.

?‍? Specialists in the traumatology department at the Wigmore Clinic said such a reaction was unlikely after vaccination. “After a small needle puncture, the maximum may be local swelling or redness with a small diameter, but it is impossible to imagine such a local reaction. There could also be an incision that would affect the whole body, not just the patient’s arm,” the medical center said.

“What is shown in the picture is like an absorbed hematoma. At the time of injection, there are no anatomically large vessels that could be damaged, and if small vessels were damaged, this would not be the case. In all probability, this is not real,” the “Wigmore Clinic” informed.

?‍? Epidemiologist Mary Ter-Stepanyan also does not consider it possible that such an injury could be a consequence of vaccination. The doctor considers this more of an anti-advertisement. First, no such side effects have been reported by AstraZeneca manufacturers. Besides, it is unlikely that such an effect would develop in 7 hours (as mentioned in the photo).

“That can be the result of vascular problems, a stroke or a bruise. Post-vaccination reactions are manifested by redness and swelling, but not in the form of bruising. They appear later, the day after the vaccination. The more likely general reactions include a possible headache, fever, muscle aches,” said the specialist.

?‍? Dermatologist Hovhannes Hovhannisyan considers it even less probable that this may be a consequence of vaccination. According to the dermatologist, this photo is connected with the anti-vaccination campaign.

Hovhannisyan even mentioned how such a photo could be staged․ The skin could be treated with methylene blue and painted. “I have seen this color in some patients lying in our skin department because their skin is treated with methylene blue dye. They apply so that there are no infectious or purulent processes. It is an affordable, very high-quality means of widespread use, but it is very inconvenient cosmetically,” said Dr. Hovhannisyan.

The dermatologist added, “There may be bleeding, a large vessel may have been damaged during the injection. It is a bit unlikely that it will be during the vaccination because the vaccination is done with fine needles. To be honest, I do not know what kind of needle AstraZeneca is administered with.”

AstraZeneca vaccination is done with a small needle․ Watch how this vaccine was administered to the President of South Korea.

Thus, the source of the spread photo and the details of the incident are not known, which already raises doubts. Besides, different specialists independently told Media.am that such an injury may be not the result of a vaccination, but a stroke, a vascular problem, an injury or a cosmetic medical intervention.