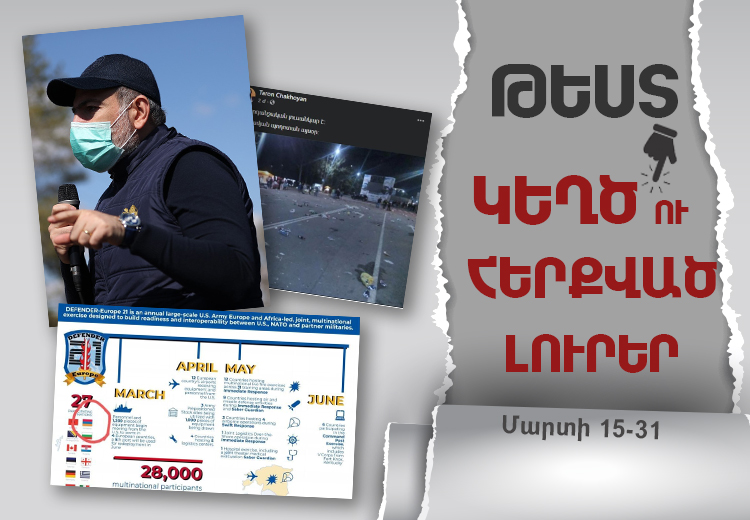 In the second half of March, the government denied the resignation of Minister Hakob Arshakyan (which he eventually did give). And the press wrote about the scandal that took place in the Kakh region of Azerbaijan, claiming that the incident happened in Artsakh. The conspiracy theories about George Soros and vaccines were also present in the information field.

🟢 Before reading, try to guess the false news by passing our short test.

Pashinyan misjudged the number of victims on the Armenian side

During his speech in Ohanavan, the Prime Minister announced that the number of victims is being falsified and exaggerated. According to the Prime Minister, as of March 19, 3,250 victims are officially known, another 189 families are waiting for answers to DNA tests.

Some politicians sound a number that is really unverified and that exceeds the official data by several times. However, the number voiced by Pashinyan also contradicts the number of officially announced victims.

Back in February, the Ministry of Health announced 3,577 dead. And on March 15, the Artsakh Defense Army published the names of another 96 killed servicemen. Thus, as of March 19, the number of officially known victims exceeded what the Prime Minister had announced.

On March 26, the Armenian press reported that “Arab sheiks are hunting in Artsakh.” Articles with such a title were published by lurer.com, Инфотека 24, asekose.am and other news outlets.

The news was wrong, Arab tourists hunted not in Artsakh, but in the northern Kakհ region of Azerbaijan. The published photos showed the hunters with a killed crane. The photos were widely spread on Azerbaijani social networks and angered users and environmentalists. 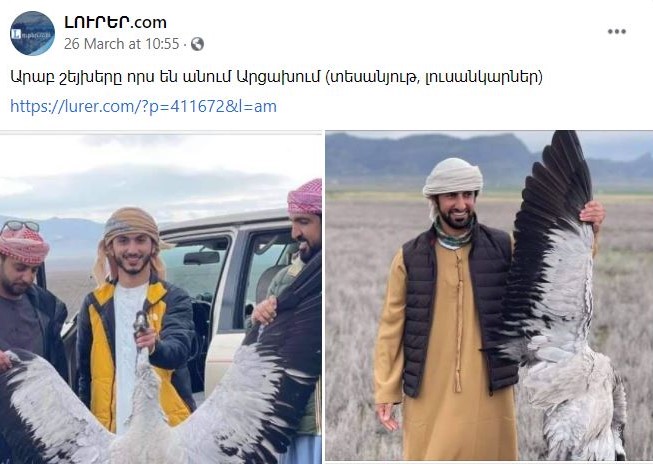 The conspiratorial allegations of the interview of the benefactor Teresa Mkhitaryan to “Yerkir Media” TV channel were spread on social networks.

Mkhitaryan believed that nothing happens by chance, and behind everything, there are “forces” – the Western globalists. According to her, these forces are also behind the Armenian government (in particular, the British, US embassies and the “Soros Office”).

Mkhitaryan was convinced that in Armenia “Soros, globalists and Western forces” make people “idiots” through the media. After that, people are given the “legalized drug” by the globalists. Mkhitaryan thought that “they give orders from outside” to grow marijuana in Armenia.

To prove her claims, Mkhitaryan submitted a list of media funded by the OSF Armenia Foundation. That list, however, consisted largely of the names of civic initiatives and NGOs. Information on OSF-funded projects is open: It can be found on the foundation’s website.

Despite the belief that the “forces” of the West have committed many atrocities, Mkhitaryan lives in one of the richest countries in the West, Switzerland. 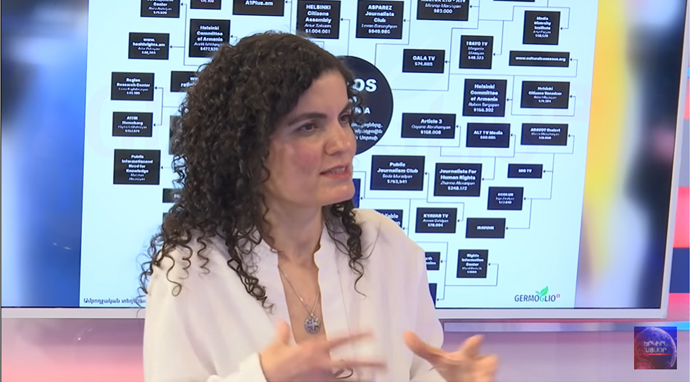 No Armenian driver was killed on the Georgian-Russian border

On March 23, the Russian “Телеканал 360” reported that a fight took place between truck drivers on the Georgian-Russian border, and a Turkish driver killed an Armenian. The information was also spread in the Armenian press.

The deputy denied the false information spread from the fake page

On March 16, a Twitter page on behalf of Russian journalist Semyon Pegov reported that the Turkish Foreign Minister had arrived in Armenia and was greeted by MP Arman Babajanyan. The post was accompanied by a photo from Mevlut Cavusoglu’s visit to New Zealand in 2019.

Arman Babjanyan referred to the post and denied the information, accusing Pegov of targeting him.

The same day, the ArmVoice Telegram channel reported that Pegov had denied the information and that he did not have a Twitter page.

On March 23, the opposition opened Baghramyan Avenue, which had been closed for about a year. On the same day, Taron Chakhoyan, Deputy Chief of Staff of the Prime Minister, posted a photo of a street covered with garbage on his Facebook page and wrote, “Baghramyan Avenue today.”

The information was incorrect. The photo did not show Baghramyan Avenue, but one of the streets in the Ukrainian city of Melitopol. Chakhoyan removed the information and apologized.

The Ministry of Defense denied the news, although the evidence provided was accurate 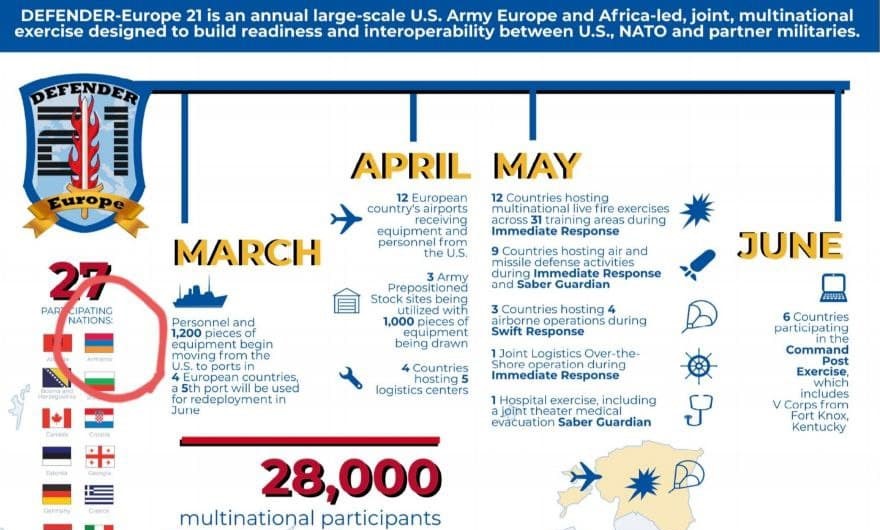 Kharchenko substantiated the assertion with an infographic taken from the official website of the Defender-Europe 21 military exercise, where Armenia was really mentioned as a participating country. Later the infographic was updated and Armenia was removed from the list of participants.

The government denied the information about Hakob Arshakyan’s resignation

The state website Infockeck.am denied the news that BTA Minister Hakob Arshakyan had resigned. Soon, however, it was Arshakyan who announced on his Facebook page that he was leaving his post.

“As a citizen of the Republic of Armenia, I consider unacceptable the use of violence by an official against any citizen,” Arshakyan wrote, referring to the incident with journalist Paylak Fahradyan.

Incomplete information on side effects of AstraZeneca was reported

In the second half of March, unverified or incomplete information about the British-Swedish AstraZeneca vaccine continued to be spread.

One of the reasons for the spread of such rumors was the cases of side effects registered in different countries. Neighboring Georgia registered an acute allergic reaction and death after vaccination.

Media.am spoke in detail about what the side effects were and why the relevant bodies advise continuing to vaccinate with AstraZeneca.

📌 Matenadaran denied the information spread by Facebook user Vardan Ghukasyan that Arabic manuscripts had disappeared from the museum institute and were sold. Vardan Ghukasyan is a former police officer, who often makes scandalous Facebook posts. In January, Ghukasyan announced that the wife of the third president, Rita Sargsyan, had not actually died. Ghukasyan did not bring any evidence to his allegations.

📌 Viva-MTS denied the information circulating on the Internet that there was a leak from the company’s database.

📌 At the end of March, information was spread on the Internet that former Chief of Police Vladimir Gasparyan had died. First, his lawyer denied the news, then Gasparyan himself.

📌 Former director of the Hayastan All-Armenian Fund Ara Vardanyan announced on his Facebook page that the fund had embezzled $8 million, and the international audit did not accept the report submitted to the fund by the Armenian government. A number of news outlets reproduced Vardanyan’s post in the same way. The foundation denied this information, calling it “nonsense and misinformation.”

📌 On March 15, 168.am website published an article entitled “Are schools switching to distance learning?” Although the author asked an ambiguous question in the title, the answer was simple and contained in the same article․ The Ministry of Health denied the information. “The spokesperson of the Minister of Health Hripsime Khachatryan told 168.am that such rumors and news are circulating almost every day, but the Ministry of Health has already been spreading an official denial for days,” the article read.

📌 Prime Minister Pashinyan accused the leader of “Yerkir Tsirani” party Zaruhi Postanjyan of slander. He demanded that Postanjyan refute the claim that Pashinyan was an agent and had received money to hand over the lands. Pashinyan also demanded 2 million AMD in compensation from Postanjyan.

📌 Journalist Paylak Fahradyan’s lawyer demanded to refute the information spread by Medianews.site that Fahradyan had sworn at BTA Minister Hakob Arshakyan, after which the minister hit the journalist. About two weeks after the incident, Minister Arshakyan resigned.