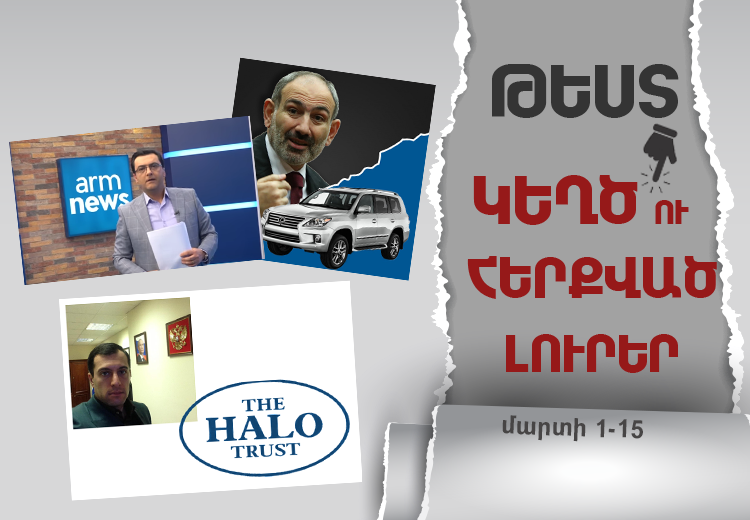 The cases of misinformation in the first half of March were scandalous revelations։ They falsely attributed words, they discovered spies everywhere and not only. Check your knowledge of misinformation through a test.

The same idea was attributed to Ter-Petrosyan again, and again without proof

During the March 10 issue of ArmNews’ “Evening News with Abraham Gasparyan” program, author Abraham Gasparyan said (in the video from 10:14) that Ter-Petrosyan was the first to try to convince the people three decades ago that the “protection” of newly independent Armenia “It’s our defenselessness.”

Arman Musinyan, the spokesman for the Armenian National Congress, the political administration of the first president, denied the allegations against Ter-Petrosyan and expressed hope that “Abraham Gasparyan will publicly apologize to the public for being misleading.” During the March 11 program, Gasparyan did not present any facts substantiating what he said, instead he presented the list of people and mass media who in the same way attributed those words to the first president.

This idea has been attributed to Levon Ter-Petrosyan long ago: It had been circulated through various individuals and media outlets, but for years no one managed to prove that Ter-Petrosyan had expressed such an idea.

The 24news.am website made a scandalous statement that “the British” HALO Trust “passed the map of the mined areas of Artsakh to the Turks.” The source of the news was Boris Avagyan, the representative of the Artsakh President with special assignments working on a voluntary basis.

Avagyan, who was involved in a criminal case in Russia and cooperated with the law enforcement agencies of that country, claimed that he had received the information from “reliable sources,” and a few hours later said that the information had not been verified yet. The news spread in the traditional and social media, NA deputy Naira Zohrabyan hurried to accuse the organization of espionage.

HALO Trust, which has been working in Artsakh since 2000 and has been highly praised by the presidents, denied Avagyan’s claim, calling it “absolutely false.” In a conversation with Media.am, the spokeswoman of the President of the Republic of Artsakh Lusine Avanesyan informed that Avagyan’s opinion cannot be considered official and does not express the opinion of the President. The information at their disposal does not give grounds to think that the accusations are true. However, on March 12, the Prosecutor’s Office of the Republic of Artsakh announced that the information had been sent to the National Security Service of the Republic.

This was not the only accusation of espionage at the beginning of March. Such a scandal developed around the head of UNICEF Armenia.

On March 2, Politik.am published an investigation into Prime Minister Nikol Pashinyan’s “Lexus” armored car, which, according to the site’s editor and author Boris Murazi, was bought after the war. The latter informs that they pinpointed the existence of that car when Pashinyan visited Shirak region by it on February 17 of this year.

“Now Pashinyan is driving a new armored car, a 2015 Lexus LX 470, but apparently it was bought from the dealer,” claims Muraz. According to their calculations, the car costs almost 70,000 dollars and its complete armor – at least 250,000 dollars.

The fact-finding platform found out that the car was not bought after the war: The same car can be seen during Pashinyan’s visit to Artsakh in September 2018. The Prime Minister’s Office informed the platform that Pashinyan’s visit to the region of Shirak took place in a Lexus LX 570 car produced in 2009, which has been on the balance of the State Security Service since 2010.

1in.am headlined the article about GM Levon Aronian: “Aronian’s next blow: ‘This is not a country to live in, we are going to be saved.'” Reading it, one gets the impression that Aronian expressed the idea. However, the clickbait title misled the audience. When reading the article, it turns out that such an idea is expressed by those leaving Armenia in a conversation with journalists at “Zvartnots” airport.

1️⃣ Samvel Asatryan, head of the information department of the General Staff of the Armed Forces, denied the publication of the “Zhamanak” newspaper belonging to the 1.am editorial office. The newspaper wrote that “Chief of General Staff of the Armed Forces Onik Gasparyan wanted to take the army to the streets, but no one obeyed the order.” Asatryan considered this “not only extremely far from reality but also a case of obvious falsification and manipulation.” The General Staff turned to the RA General Prosecutor’s Office on this occasion.

2️⃣ In another case, Asatryan reported that fake pages appeared on social networks in the name of Onik Gasparyan, and Gasparyan does not have a personal account on any social network. During the Second Artsakh War, such cases were also reported with key figures who provided information, including some media outlets.

3️⃣ The Public Relations Department of the Office of the President of the Republic of Armenia denied the spread information that President Armen Sargsyan sent a mediator to the Chief of General Staff of the Armed Forces Onik Gasparyan to persuade him to resign.

The mushroom website Amnew.site published a video in which luxurious private houses built in Stepanakert were seen. Mediaport’s Telegram channel claimed that the “published house” is located in Los Angeles. In fact, the channel only checked the main picture of the publication, which does not appear in the video and really isn’t in Armenia or Artsakh.

Infocom studied the published video and found out the specific location of some of the houses in Artsakh.

The photos of the March 1 rally became another reason for misinformation. A number of media outlets (BlogNews, Alternativ.am, Yerevan.Today, Times.am, Yerkir.am and Mediaport‘s Telegram) claimed that the photo shared on the My Step bloc’s page had been edited to show a larger number of participants.

However, a study conducted using the FotoForensics program to verify that the photos were edited shows that the photo was not photomontaged. Besides, a similar picture can be seen in one of the photos taken as a result of the aerial shooting taken by the “Union of Informed Citizens” NGO.

Political scientist Stepan Grigoryan publicly denied the statements made on July 30, 2018, about the former Chief of General Staff of the Armed Forces Yuri Khachaturov.

In an interview with “A1 +,” Grigoryan made statements about Yuri Khachaturov handing over territories in exchange for money, not allowing for resisting the enemy and not being on the ground during the war, not fulfilling his official duties.

❌ The Hayastan All-Armenian Fund denied two circulating pieces of information in one message. The international audit did not confirm the expenditures submitted by the Ministry of Finance to the Fund. In fact, the international audit is still ongoing and not over. The news that $8 million from the fund has been cashed and misappropriated is not true.

❌ The Mayor of Yerevan Hayk Marutyan clarified that the restrictions on admission and attendance in community kindergartens were introduced by the Ministry of Health, taking into account the dangers of spreading the coronavirus. “After the lifting of those restrictions,” Yerevan kindergartens will immediately accept another 7,000 children,” Marutyan said.

❌ The Tavush regional administration informed that there is no border determination process taking place in the Tavush part of the Armenian-Azerbaijani border and it is not planned. The regional administration considered “false and divisive publications” a crime and drew the attention of law enforcement agencies. Such an assertion was made by the former Prime Minister of Armenia, economist Hrant Bagratyan.

❌ The President’s Office denied the news spread by “Iravunk” daily that Sargsyan left for Baku on November 17, 2020. They informed that on the mentioned day he received the newly appointed Ambassador Extraordinary and Plenipotentiary of Canada to Armenia Alison Mary LeClaire at the residence of the President of the Republic.

❌ The Artsakh Defense Army denied the news about handing over the Red Market road to Azerbaijan.

❌ Lydian Armenia denied the news about the exploitation of the Artsakh mines, which came under the control of Azerbaijan.