False And Manipulative News Of The Region About Armenia: February 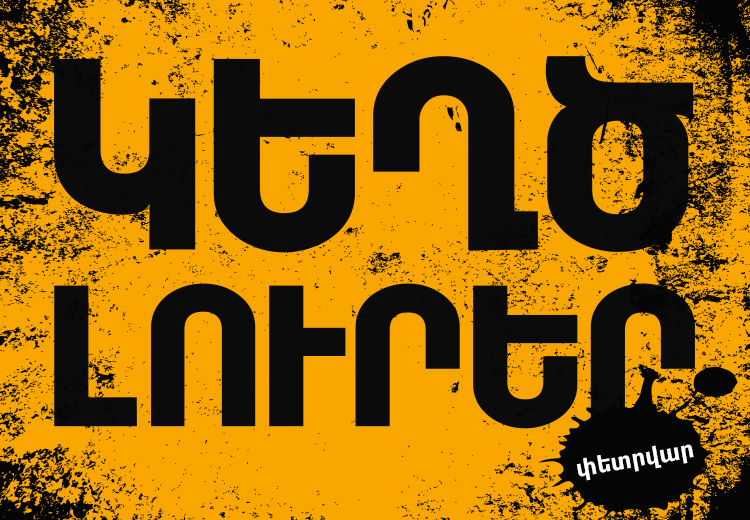 In the second half of February, the regional press was discussing Nikol Pashinyan’s statement about the Russian “Iskander” ballistic missile system. At the same time, a representative office of the Russian nationalist Царьград online TV channel was opened in Armenia, which has already managed to spread conspiracy theories and unverified news.

Russia reacted sharply to Pashinyan’s statement about the “Iskanders”

On February 23, Prime Minister Nikol Pashinyan gave an interview to 1in.am, in which he claimed that the Russian “Iskander” ballistic missile system was used during the war, but was ineffective. Pashinyan’s words received a sharp response.

? The Russian Ministry of Defense announced that “Iskanders” were not used during the Artsakh war and Pashinyan, in all probability, received wrong information. After the telephone conversation between Pashinyan and Putin, the Prime Minister’s spokesperson Mane Gevorgyan also made a similar statement. “As a result of the combination of available facts and data, the Prime Minister of Armenia came to the conclusion that he was not properly informed about this situation.”

? On February 26, Russian journalist Kirill Krivosheev announced on Meduza that it was worth believing the Russian military when they said that Iskander had not been used. Krivosheev mentioned that he was in Azerbaijan during the war and did not hear rumors about “Iskander,” and Azerbaijan, according to him, had no reason to hide such a case.

Krivosheev’s assertion is based on assumption. However, data from open sources prove that “Iskander” was nevertheless used. Thus, Fip.am analyzed a video published during the war, where, according to the periodical, the use of “Iskander” can be seen.

? State Duma deputy Dmitry Sablin referred to the conspiracy theory about “color revolutions” often used in Russian propaganda. “Soros’s actions deceived Pashinyan … This is more proof of how the street brings to power a man who destroys his country with beautiful but alien slogans and a hostile scenario.”

EADaily journalist Lia Khojoyan, who quoted these words, added that the United States, in any case, has something to do with this story. Khojoyan recalled the visit of President Trump’s adviser, John Bolton, to Yerevan and stated that Pashinyan, following Bolton’s advice, was engaged in “counter-advertising of Russian weapons.”

This channel has a very conservative and nationalist orientation. The head of the channel’s Armenian representation is Mikael Badalyan. According to the Facebook page, he is a specialist in the field of tourism and participates in the rallies of the opposition “Homeland Salvation Movement.” 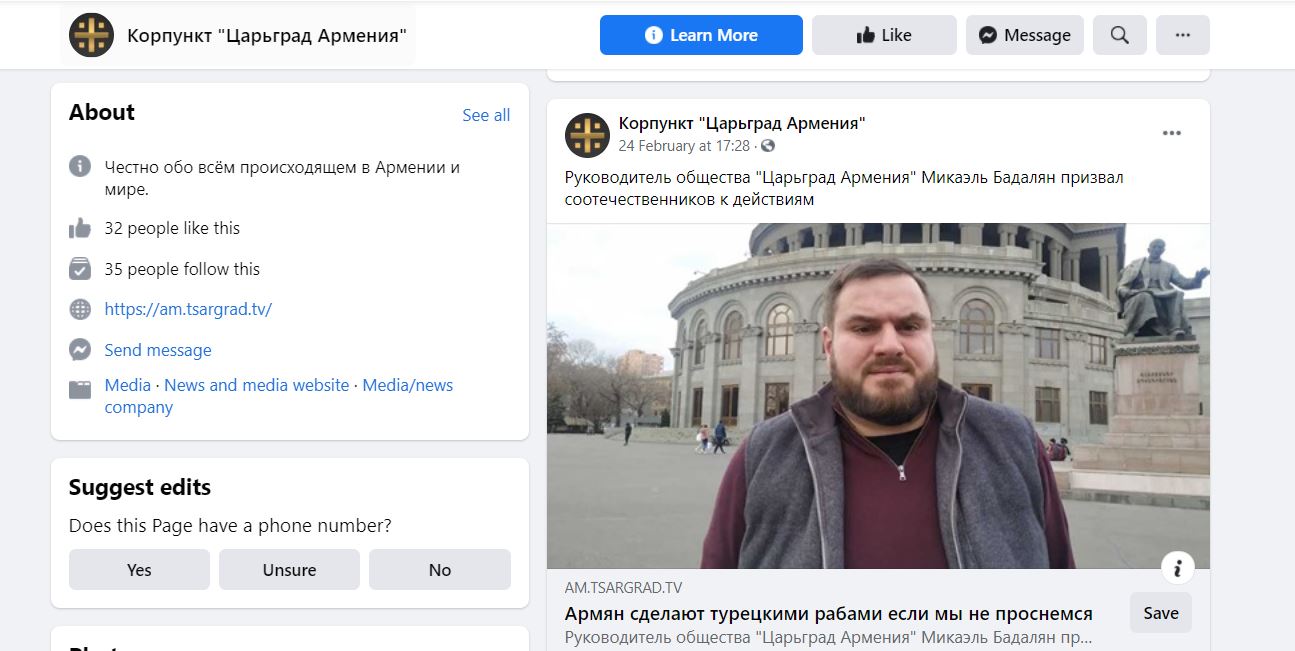 “Царьград Армения” has already made several problematic statements about the events in Armenia.

? In the article “Why do we need to study the genes of Armenians in the West?” “Царьград” claims that the National Center for Disease Control and Prevention in Armenia has some mysterious reason to study the prevalence of various diseases among Armenians.

This article uses the Russian propaganda narrative about US-funded laboratories in a number of countries. Media.am referred to these allegations in detail on another occasion.

? The head of “Царьград Армения” Mikael Badalyan stated that Prime Minister Pashinyan has adopted an anti-Russian policy, which is a disaster for Armenia․ “Any road that is not Russian is anti-Armenian at present.”

In his speech, Badalyan did not forget one of the most popular propaganda claims of recent years and said that the real reason for the defeat in the Artsakh war was the failure to preserve traditional values.

? “Царьград Армения” accused Prime Minister Pashinyan of underestimating Russian weapons. The channel quoted the leader of the “Armenian Eagles” party Khachik Asryan as saying that Pashinyan was trying to put the responsibility for the defeat on Russian weapons. “This will be liked by American viewers and readers, for whom the scandalous interview was given,” Asryan said.

State Duma deputy Vladimir Zhirinovsky also hinted at Pashinyan-US relations. The latter predicted a military coup, during which Pashinyan “will hide in the US Embassy.”

Aliyev’s statements about Armenia were spread in the Russian press

On the occasion of the 29th anniversary of the Khojaly bloodshed, Azerbaijani President Ilham Aliyev gave an interview in which he spoke about the internal political events in Armenia and Armenia’s role in the region. Aliyev’s allegations were also widely reported in the Russian press. 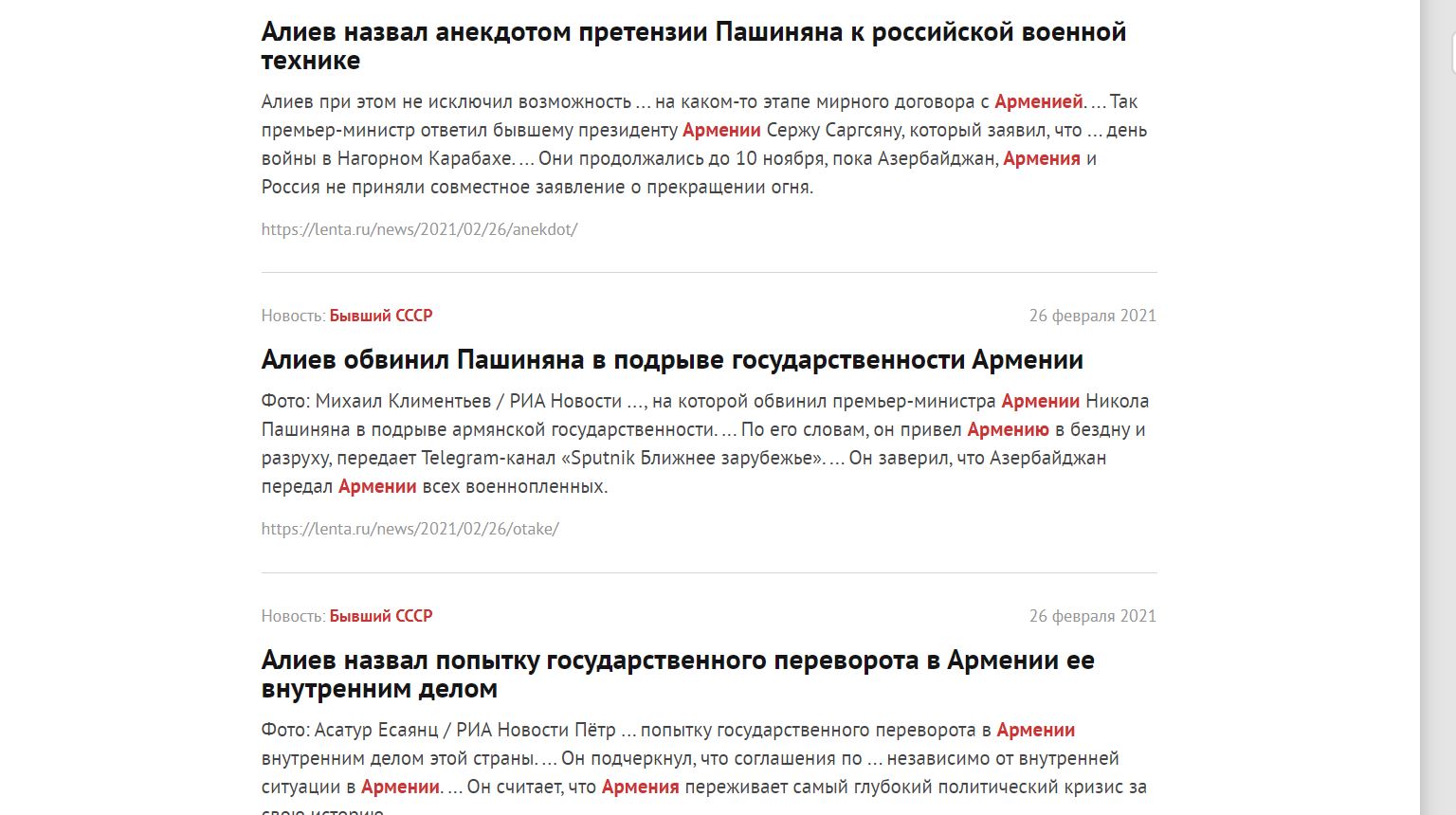 Thus, lenta.ru wrote that “Aliyev warned Armenia not to try to resume the Karabakh war.” Vz.ru reported that Aliyev considered Pashinyan’s words about “Iskander” a “joke,” and the President of Azerbaijan called the Russian weapon “one of the best in the world.” Russia Today agency noted that Aliyev thinks that the events taking place in Armenia “undermine the Armenian statehood.”