What Did “My Step” Say About The Snap Elections Before February 7? 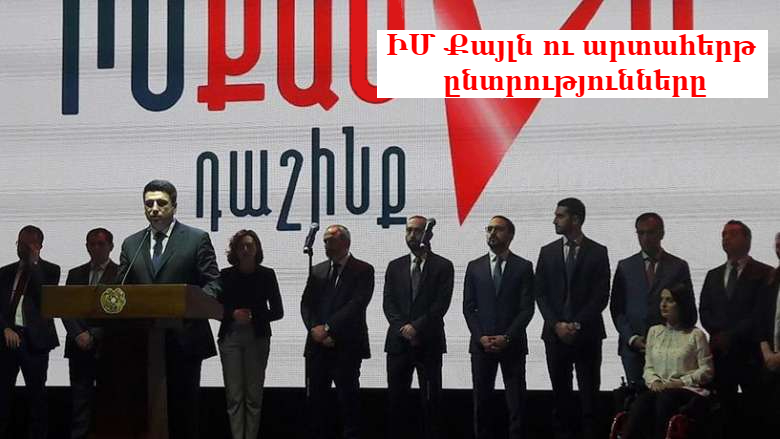 The “My Step” faction issued a statement on February 7, stating that as a result of a meeting with Prime Minister Nikol Pashinyan, it was stated that the Prime Minister’s proposal to hold early parliamentary elections did not receive a positive response from the parliamentary opposition and there was no demand for early elections by the general public.

The statement did not say on what study or research the faction had measured the lack of demand from the general public. The deputies of “My Step” also did not resolve that issue in further clarifications. Only Sos Avetisyan answered journalist Mkrtich Karapetyan’s question of what measurements the faction used to quote the general public with, “There are some sociological surveys done by different organizations, the CRRC has others where there are different images.”

We could not find any such research on the official website of the organization, instead, the CRRC Executive Director Sona Balasanyan told us that research on the socio-political situation has been done, but it is not subject to publication. Sona Balasanyan gave a negative answer to the question of whether the statement of MP Sos Avetisyan is based on their research and whether the polls showed that there is no demand for early elections among the public. In her words, it is important to distinguish the research conclusions from any political conclusions and comments made on the basis of research data.

Having found that the absence of a demand for early elections was not based on a CRRC survey or a sociological survey, we tried to find out what the representatives of “My Step” thought about early elections before the faction’s announcement made on February 7.

Nikol Pashinyan wrote about the importance of the December 25 snap elections. According to him, the fate of the post of Prime Minister and the future political leadership of the country should be decided by the people, with the free expression of their will. According to him, there is only one way to get the answers to all the questions – to hold special parliamentary elections. In an interview with Petros Ghazaryan on Public TV on December 27, the Prime Minister called the snap elections a mechanism by which everyone’s voice will be heard, and the ratio of those votes will be weighty and measurable.

Pashinyan also spoke about the extraordinary elections earlier, on December 5, from the NA tribune. According to him, the opposition does not demand early parliamentary elections, as it wants to leave the people out of the process.

Speaking about the extraordinary elections, NA Vice Speaker Alen Simonyan stated that he wanted it to take place long ago. “We all need it, with the same logic that we should breathe after the blow we received and understand how we build our future by evaluating our mistakes. As soon as possible technically and physically. I think there can be no other opinion. “

Speaking to reporters on December 11, Hamazasp Danielyan, an MP from the My Step faction, said of citizens and political forces demanding the resignation of the Prime Minister: “Different parts of the people can demand different things at the same time. The only way to check that demand is through elections.”

On December 26, Sos Avetisyan, an MP from the My Step faction, stated on 24TV that snap elections are necessary for the Armenian political field to be able to present real programs to its voters about the new situation. “The resignation of the Prime Minister is logical if there is an extraordinary parliamentary election. Moreover, I think it is necessary to do it as soon as possible because it will allow new political teams, new people who are neither on this side nor that, to formulate what they have to say and enter politics. The later those elections are held, the more this or that opinion will start to radicalize or fade away. Both are bad. Elections are generally the best way to overcome the political crisis.”

My Step faction MP Tatevik Hayrapetyan was also in favor of early elections. In any case, this is how we understand it from her interview with Sputnik Armenia. In response to the journalist’s question, the deputy noted that the key to overcoming the internal political crisis should be extraordinary parliamentary elections, about which the head of the country spoke, “One needs to be blind at the very least so as not to notice the dissatisfaction in this situation. Many do not join the opposition movements for various reasons, also due to a lack of trust, but they also have a huge distrust of the current government. I see it obviously. I think the public should be given an opportunity to elect a new government.”

Thus, it is obvious that, before the faction’s official statement that there is no public demand for holding special elections, a number of deputies expressed a diametrically opposite opinion. The latter considered the early parliamentary elections the best way to restore public solidarity and express the will of the people. They have spoken several times about the importance of holding elections a few days ago. At the same time, the fact that “the general public did not demand early elections” is not confirmed by facts.