Geolocating The Location Of The Video Capturing Jalal Harutyunyan’s Injury 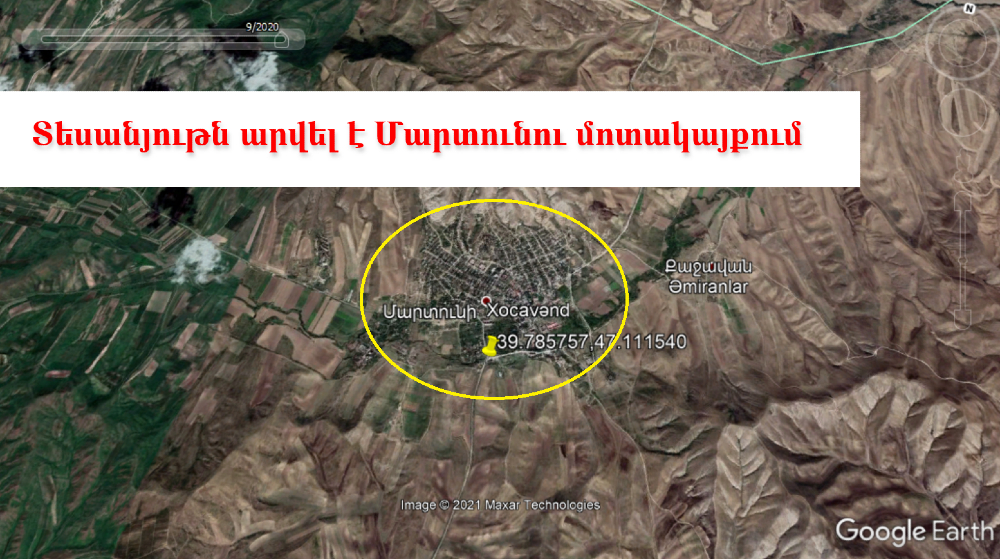 About a month after the second Artsakh war, on October 27, by the decree of Artsakh President Arayik Harutyunyan, the commander of the Defense Army, Lieutenant General Jalal Harutyunyan was relieved of his post. According to the President, the reason for his release was an injury he received in the combat position.

Spokesman for the Artsakh President, Vahram Poghosyan, told Armenpress that the video in the Azerbaijani sources had nothing to do with Jalal Harutyunyan’s injury, repeating that the commander of the Defense Army was wounded in a combat position.

Media.am managed to determine the location of the shooting and the car explosion from the video. It truly was taken in the territory of the Artsakh Republic, particularly near the city of Martuni.

Photos of the exploded car were spread by Telegram channels and later by the media. Comparing the video with the spread photos, we were able to understand that they were really taken in the same place.

We are finally convinced from the photos that the video was taken on the road leading to Martuni.

So we can say that the place where the video’s location was. However, the location does not prove that Jalal Harutyunyan and his colleagues were in the exploded car.

On November 12, a photo of a man with severe burns appeared on the Internet, particularly on Facebook and websites, as proof that Harutyunyan was indeed injured. The authenticity of the picture has not been denied yet. The photo has not appeared on the Internet before. On December 4, Jalal Harutyunyan was discharged from the hospital. No video or photo with his participation was published, nor was it mentioned what injury the lieutenant-general received.

A few days ago, on January 30, the former commander of the Defense Army Jalal Harutyunyan was recognized as a victim in a criminal case being investigated by the Investigative Committee. On the same day, the RA Prosecutor’s Office informed “Sputnik Armenia” that a criminal case had been initiated for attempting to assassinate Jalal Harutyunyan, adding that there was no person with judicial status. The statements of the Investigative Committee and the Prosecutor General’s Office contradict each other in this respect. It is not clear whether there is a person with a judicial status or not.

The first article defines the attempted murder of two or more persons in a life-threatening manner, motivated by national, racial or religious hatred or religious fanaticism. Article 185,  Part 3, Point 1 provides for the deliberate destruction or damage of another’s property which has caused particularly large damage.

The probability that Jalal Harutyunyan was wounded during a non-combat operation increases, especially from the second article. It turns out that they tried to kill Harutyunyan and the others, deliberately destroying property.

Thus, we conclude that the incident recorded in the video took place in the territory of the Artsakh Republic. In the interactive map presented by Artsrun Hovhannisyan on October 27, this region was under the influence of the Armenian side. Judging by the make of the car and the military clothes of the injured people, it is presumed that there were soldiers in the exploded car.

Even if Vahram Poghosyan’s denial is true and the explosion in the video has nothing to do with Jalal Harutyunyan’s injury, either way, the question arises as to why the injuring or killing of citizens of Armenia or Artsakh whether on October 27 or any time in the future did not receive any official response, or why confirmation of the video being real or not was not reported or the identity of the burned people was not revealed.