False And Manipulative News About The Region: October 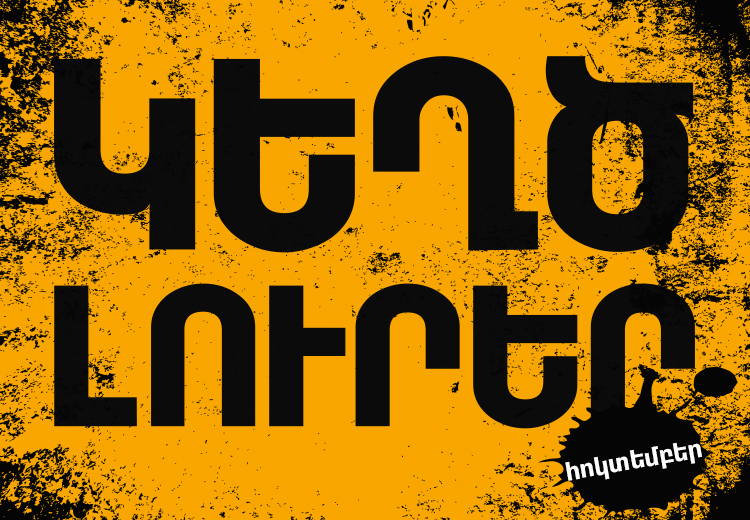 In October, many of the world’s media focused on the war between Armenia and Azerbaijan. The media often reported incorrect news, but the main sources of misinformation about Armenia were from Azerbaijani sources.

On October 18, the President of Turkey announced that Russia, France, the United States supporting Armenia in every way including supplying arms.

Armenia, like Azerbaijan, buys weapons from Russia. However, the allegations made against the three Minsk Group Co-Chairs about arming Armenia are not confirmed by any independent media outlet or source. Erdogan, in his turn, does not present any justifications.

This statement of Erdogan was a response to the accusations about Turkey’s involvement in the Artsakh war. The press reported on the F-16 fighter jets, about 600 soldiers and mercenaries provided by Turkey to Azerbaijan.

On October 24, the US Embassy in Baku announced the threat of terrorist attacks in Azerbaijan.

The Azerbaijani press spread this statement with its addition: Haqqin.az wrote, “US Embassy warns: Armenians are preparing terrorist attacks in Baku.” The website did not provide any evidence, it only referred to the Azerbaijani special services.

This publication was misleading, as the embassy statement did not mention Armenians.

It is known that weeks before the start of the war, the transfer of mercenaries from Syria to Azerbaijan was carried out. The mercenaries were recruited from armed groups operating under the auspices of Turkey, as well as from the civilian population. They moved to Azerbaijan through Turkey.

On October 23, the US Embassy in Turkey warned of the danger of terrorism, noting that visa services in that country are temporarily suspended.

On October 25, the United States, following Russia and France, tried to establish a ceasefire between the conflicting parties. This agreement, however, met the fate of the previous two ceasefires, it was violated shortly after its entry into force.

The next day, President Donald Trump, answering the question about the ceasefire, said that it is maintained. At that time, both Armenia and Azerbaijan had already announced that the ceasefire had been violated, in fact, Trump was lying.

Prime Minister Nikol Pashinyan responded to his statement on Twitter, “I would like to state that the efforts of the international community, this time brokered by the United States, to establish a ceasefire, have failed.” In the post, Pashinyan also mentioned Trump’s Twitter account.

Nobody burned the Russian flag

The Prime Minister’s press secretary Mane Gevorgyan responded to the news that a Russian flag had been burned in Yerevan. It is about the demonstration in front of the Russian embassy in 2015, which took place after the murder of the Avetisyan family by a Russian soldier in Gyumri.

Mane Gorgyan was present at the rally. She made a reminder that no one had set the flag on fire.

Gevorgyan wrote about this to journalist Vladimir Solovyov, who read Gevorgyan’s letter on his YouTube channel.

On October 5, the Russian website Meduza referred to Nikol Pashinyan’s rule after the revolution. “What happened?” In the next episode of the podcast, journalist Vladislav Gorin and Kirill Krivosheyev, the correspondent of the foreign policy department of “Коммерсант” publishing house, made incorrect statements.

❌ Kirill Krivosheyev said (10: 35-10: 45) that the case against Gagik Tsarukyan did not move, because the coronavirus hit him, Tsarukyan did not go to prison. Tsarukyan was arrested on September 25, he was in prison when the podcast was published.

❌ Vladislav Gorin, in his turn, announced (11: 00-11: 10) that Nikol Pashinyan had conducted an “обнуление” – zeroing. This is the name of the constitutional amendments adopted in Russia this summer, which “zero-ize” the terms of Putin’s rule, allow him to be elected president twice. No such process has taken place in Armenia, there has been no Constitutional referendum, nor has the number of allowed re-elections been changed in any way.

Despite multiple pieces of evidence, Azerbaijan and Turkey denies allegations of involving Syrian mercenaries in the war

During the last month, three countries at once – Armenia, France and Russia – announced that mercenaries from Syria had moved to the South Caucasus.

The international press also covered the topic, and the photos and videos posted by the mercenaries on social networks helped to prove that the rumors were true․ A few days before the start of the war, Turkey started transferring mercenaries from its own Syrian armed groups to Azerbaijan.

Ankara and Baku categorically deny this accusation. New evidence appears along with the denials. For example, on November 1, Armenia published an excerpt from the interrogation of the second captured Syrian mercenary.

In response to the news about the Syrian mercenaries, the aide to the President of Azerbaijan Hikmet Hajiyev states that it is Armenia that is attracting foreign mercenaries, the “terrorists” of the Kurdish Workers’ Party.

These accusations are baseless. As a foreign mercenary, Hajiyev cites the example of a Lebanese-Armenian man named Vardkes, who was repatriated this summer and volunteered during the war.

The accusation about the PKK militants is often voiced in Turkish-Azerbaijani sources.

This is an official proclamation of #armenian member of parliament, Rustam Bakoyan, who clearly “is proud” of #terrorist involvement along with armenian armed forces in fight against #Azerbaijan. You can see Yazidis, #PKK terrorists in the picture. #KarabakhisAzerbaijan https://t.co/zPsXQVjpG1

Sometimes the photos of the soldiers of the Yezidi community of Armenia are brought as evidence. Yezidis are a national minority in Armenia and RA citizens. There is no reason to suppose that the Kurdish Workers’ Party sent the Yezidis to Armenia to the front.

For example, on October 5, Amnesty International confirmed that Azerbaijan had used banned cluster bombs to bomb the civilian population of Stepanakert. It was about the Israeli M095 DPICM tape weapon.

A few days later, Hajiyev published a picture of the same M095 DPICM bombs, claiming that the Armenians had hit the oil pipeline with them. Military expert Rob Lee noticed that the cluster bombs could not fall as close together as they had in Hajiyev’s photos. 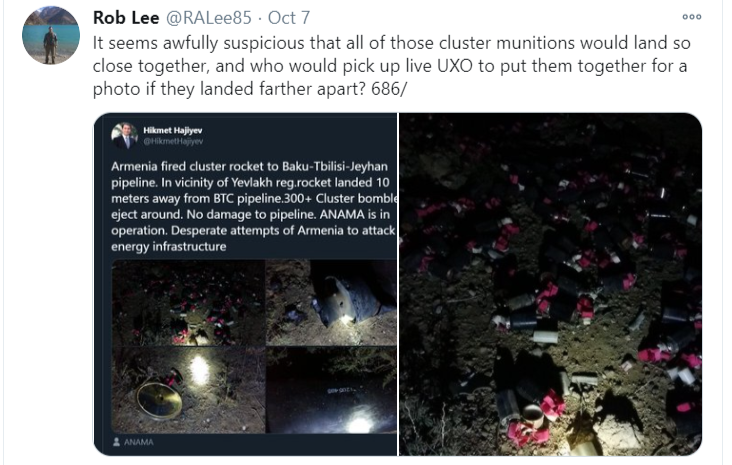 A few weeks later, on October 29, Amnesty International confirmed that Armenia had also used a cluster bomb during the bombing of the town of Barda yesterday. The Russian 9M55 Smerch bomb was used.

Greg said that Pashinyan, speaking about terrorists, “means the Azerbaijanis.” However, what the journalist said was not a direct quote from the Prime Minister’s speech, but a comment.

It is possible that the journalist misunderstood what Pashinyan said․ The Prime Minister has repeatedly spoken about the terrorists in the region. However, his statements did not refer to the Azerbaijani people, but to the Syrian mercenaries brought by Turkey to the South Caucasus.

“Дождь” confused the footage from Stepanakert for Tartar

On October 5, the Russian “Дождь” TV channel reported on the bombing of the Azerbaijani city of Tartar, but mistakenly showed the footage of the bombing of Stepanakert. The news outlet apologized for the mistake.

The Armenian branch of the Russian state “Sputnik” agency wrote about the mistake.