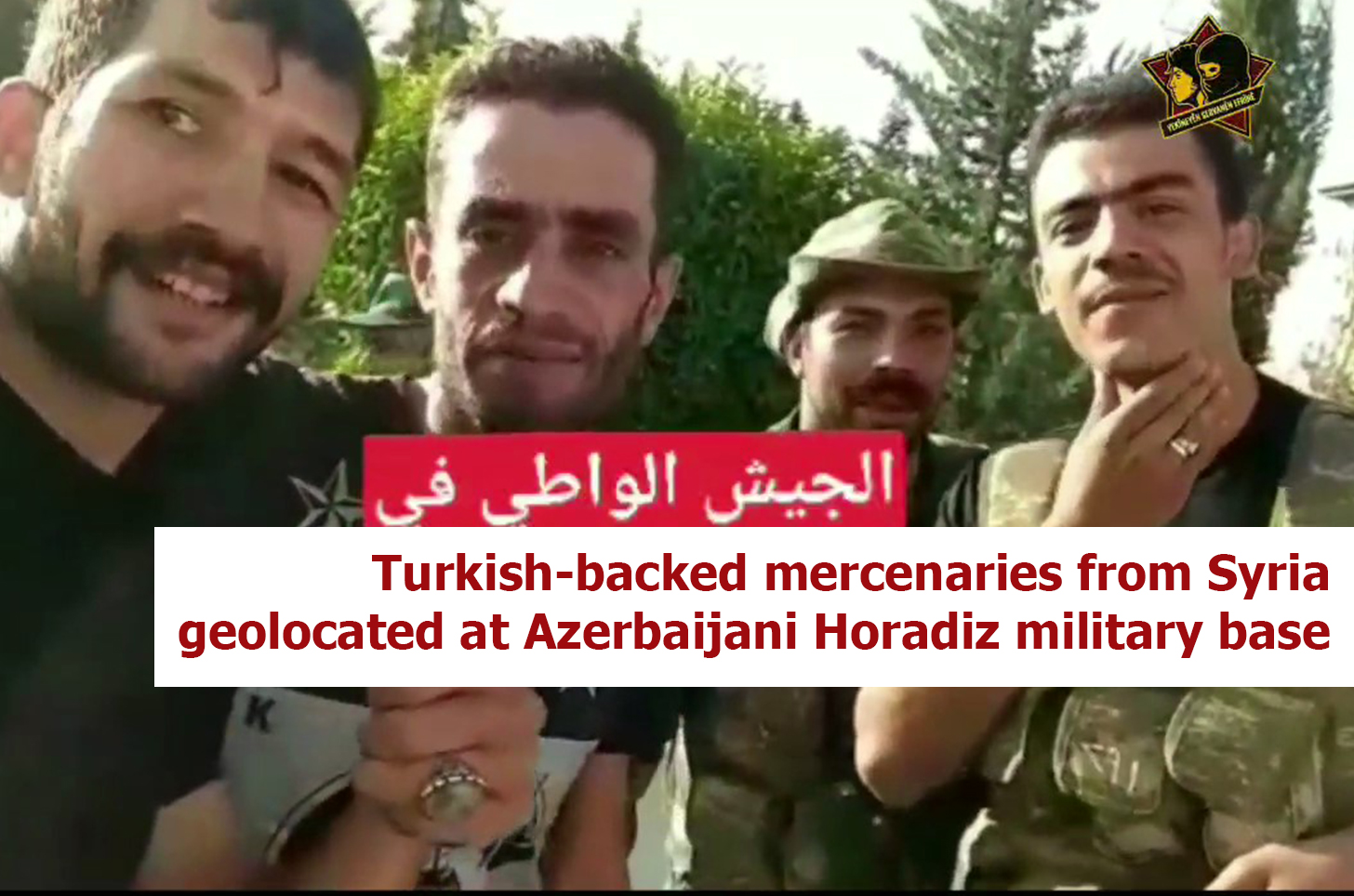 While fighting between Armenia and Azerbaijan escalated into a full-scale war, both local and international media reported about Turkish-backed mercenaries from Syria being transported to Azerbaijan. Up till now, most reports relied on the testimonies of soldiers and sources in Syria. But on October 3, a video showing Arabic-speaking men listening to the chants of the Turkish-backed Sultan Murad division has been geolocated to theAzerbaijani Horadiz military base.

Evidence shows mercenaries are being transported from Gaziantep to Baku

The first reports about mercenaries from Northern Syria in Azerbaijan appeared back in July when Armenia and Azerbaijan clashed near the Tavush/Tovuz borderline. Turkey and Azerbaijan both denied the information. In September, reports became more frequent, and as the situation escalated, videos and photos of alleged mercenaries appeared on social media.

On September 22, journalist Lindsey Snell published a photo that showed alleged mercenaries being transported to Azerbaijan. Days later, journalist Youri van der Weide tweeted about a military A400M aircraft flying on September 22 from the Turkish city of Gaziantep (near the Syrian border) to Ankara. The interior of the A400M is similar to the one in the photo published by Snell.

Russian Novaya Gazeta recreated the route of the mercenaries from Syria to Azerbaijan based on the evidence of a local source. NG writes that fighters are first sent to the Turkish border town of Killis, where they change uniforms. Then they are taken to Gaziantep airport to fly to Baku via Istanbul. The flight passes the airspace of Georgia (note that Georgia temporarily prohibited the transport of military cargo through its airspace on October 3).

Soon, many other photos claiming to show mercenaries in Azerbaijan appeared on social media. Men in those photos are wearing the military uniform of the State Border Service of Azerbaijan. This was pointed out by Washington-based analyst Emil Sanamyan (here and here) and  Baku-based journalist Khadija Ismayilova (however, Ismayilova claimed that proves nothing, as those could be real Azerbaijani soldiers).

The uniforms on the photos indeed look similar to the one that Border Service uses. Moreover, the round sign on the jacket’s arm can be seen on both Border Service and mercenaries’ photos. 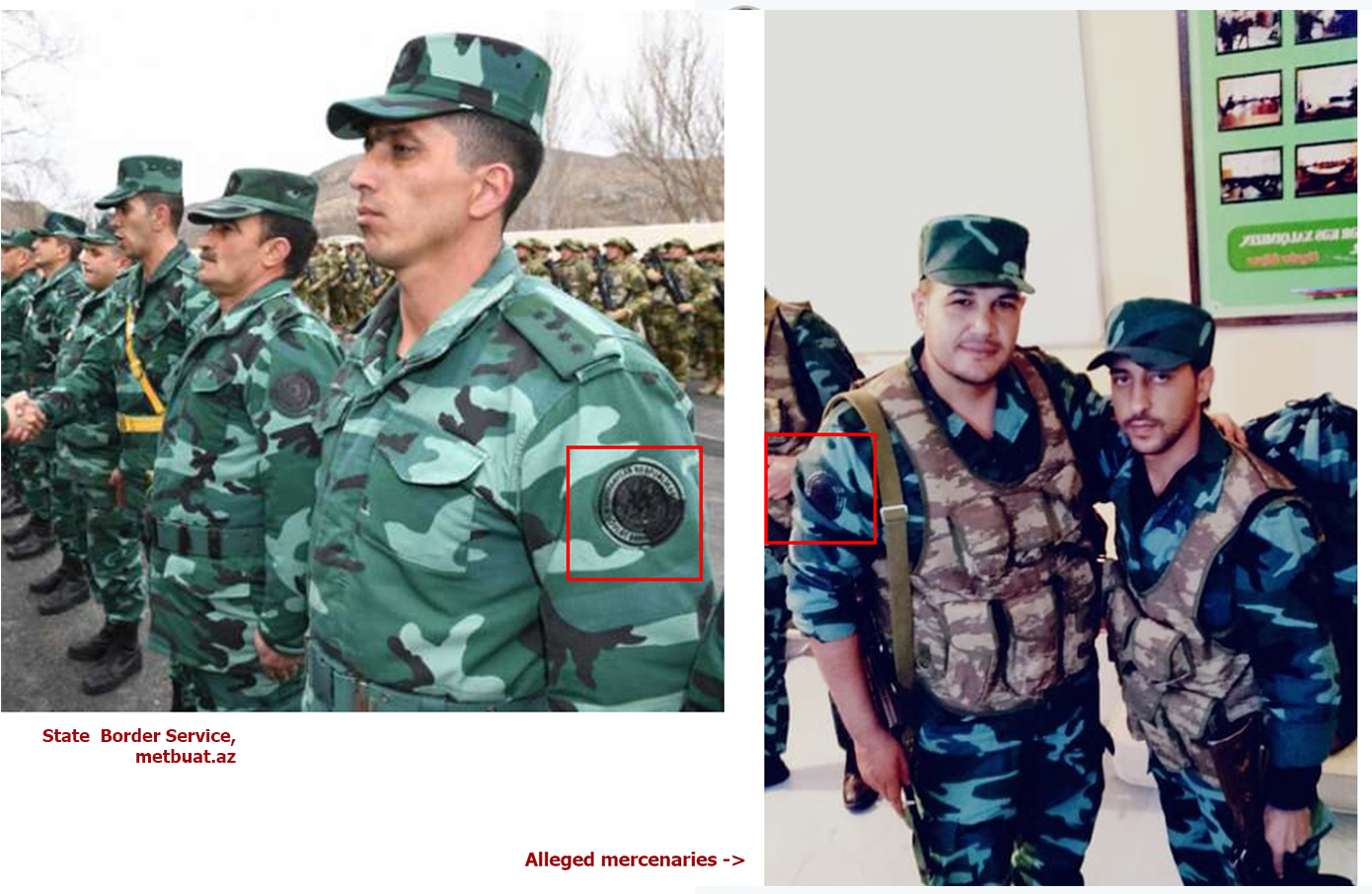 Mercenaries filmed themselves in the Azerbaijani military base

Another piece of visual evidence of Turkey-backed mercenaries in Azerbaijan is a video with Arabic-speaking men dancing and listening to Sultan Murad Brigade chants.

The video was soon geolocated to be in Horadiz – a town not far from the line of contact where an Azerbaijani military base is located. The geolocation was done both by Armenian Razminfo and by German conflict analyst Julian Röpcke. 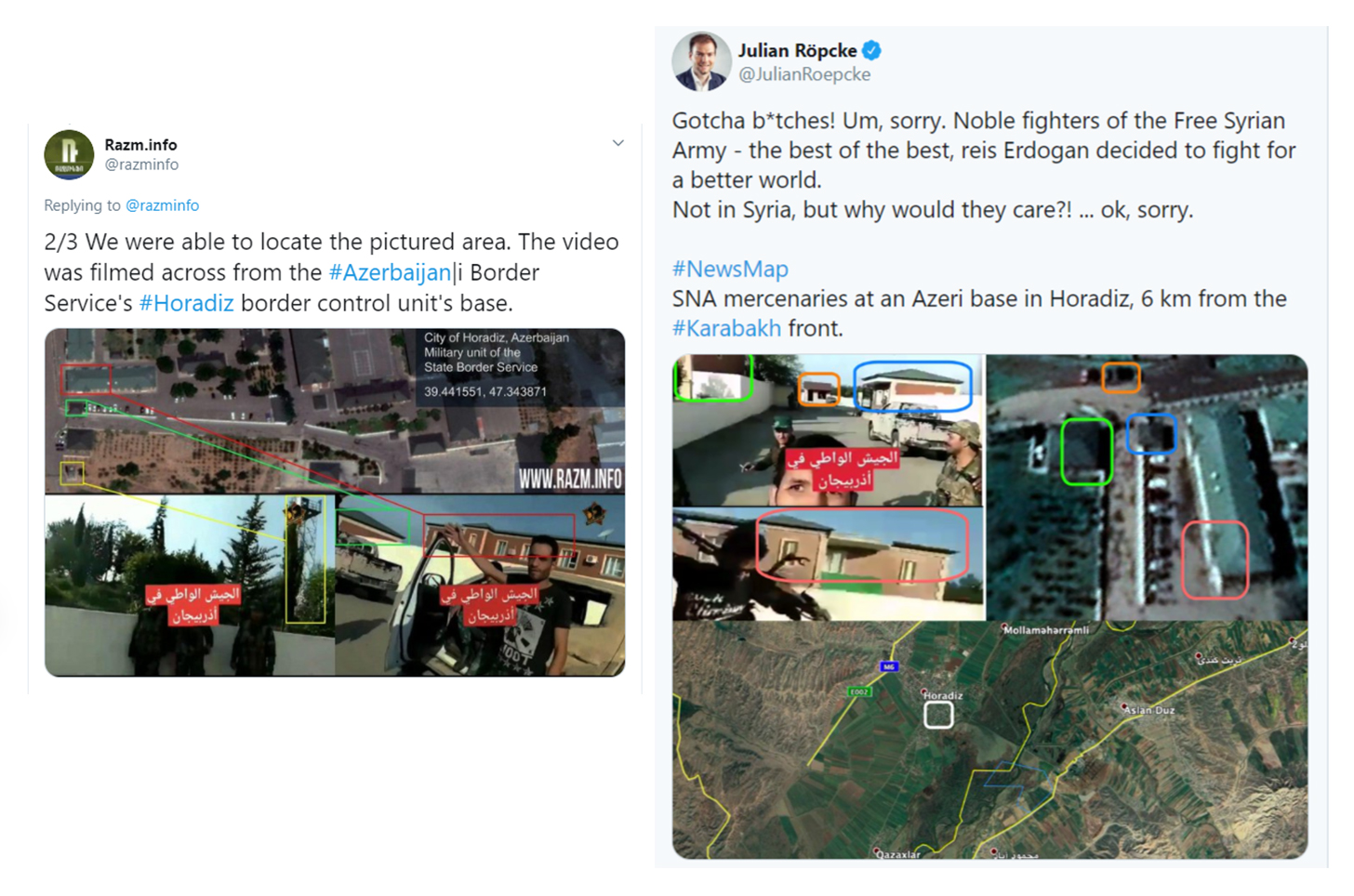 Third-party countries also report the presence of mercenaries in Azerbaijan. French President Emmanuel Macron said that France has reliable information about jihadist groups being transported through Turkish Gaziantep to the warzone in Artsakh/Nagorno Karabakh. Additionally, the United States warned its citizens not to travel to Azerbaijan due to “COVID-19 and terrorism concerns.”

Most reports agree that the Sultan Murad division has been recruiting mercenaries. Named after 16th century Ottoman Sultan Murad II, the division is part of Syrian Turkmen Brigades – groups of Turkmen and Turkish militants that fight against the state army of Syria. The Sultan Murad division is also part of the so-called Syrian National Army (SNA, known also as the Free Syrian Army), which is a unity of different armed groups supported by Turkey. Turkey supplies weapons and provides military training to SNA.

Not all mercenaries in Azerbaijan are professional fighters

It should be noted that while mercenaries are recruited by armed groups and include long-term militants, not all people transported from Syria to Azerbaijan are professional soldiers. Some are regular civilians that signed up as mercenaries driven by poverty: years of war have crashed the Syrian economy. For example, The Guardian spoke to a tailor displaced from Aleppo to Azaz, who said he cannot make living practicing his craft and had to sign up as a mercenary.

Information about the amount of the mercenaries’ salary varies from 1,000 to 2,500 USD which is significantly higher than what those men could make in Northern Syria. Novaya Gazeta writes that Turkey promises not only a high salary but also Turkish citizenship for mercenaries and their family members, as well as 30,000 USD to the family in case of the fighter’s death.