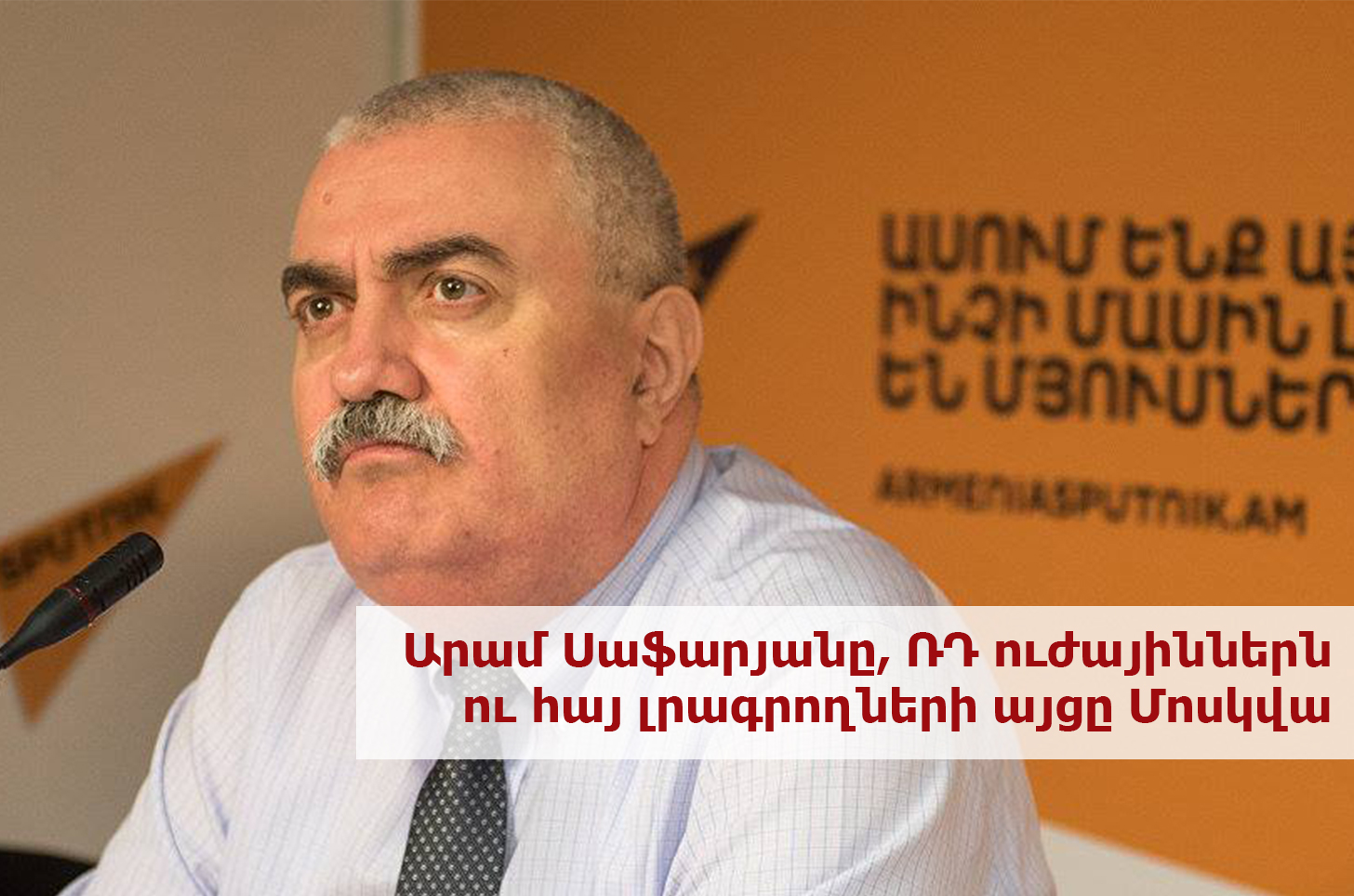 On September 18, the Russian Dossier Center, which is funded by Mikhail Khodorkovsky, a Kremlin critic and former head of the Yukos oil company, a wealthy Russian tycoon, published an investigative article on the Kremlin’s “agents of influence.”

The investigation mentions “agents” using pseudonyms who report to the Kremlin. Moreover, the documents of the Russian Foreign Intelligence General’s office contained copies of the passports of PAP leader Gagik Tsarukyan, PAP, as well as Public Council member Aram Safaryan.

NSS Director Argishti Kyaramyan announced that the publication is considered a report on a crime, and a corresponding legal process has been initiated.

According to the “Dossier” center, Aram Safaryan was in direct correspondence with the Russian president’s office for interregional and cultural relations with foreign countries.

Aram Safaryan denied the information provided in the “Dossier” publication and stated, “I will continue to work with all my might to prevent the weakening of the Armenian-Russian strategic alliance.”

“Dossier” provided Media.am with one of the unpublished documents in the article, according to which the “Integration-Development” NGO headed by Aram Safaryan organized a visit of Armenian journalists and politicians to Moscow with Russian funding. The visit was to take place in April 2020 but was canceled due to the epidemic.

Media.am will talk about who Aram Safaryan is and what media outlets the security forces were invited to Moscow.

Who was invited to Moscow?

On April 26-30, 2020, the “heads of Armenian media and leading journalists” were to visit Moscow. The visit was dedicated to the 75th anniversary of the victory in World War II. The organizer was the “Integration and Development” NGO founded by Aram Safaryan. $18,560 was allocated from the RF President’s Office for the total visit.

The “Dossier” center handed over to Media.am the organizational expenses of the visit, the goals, and the document introducing the participants. 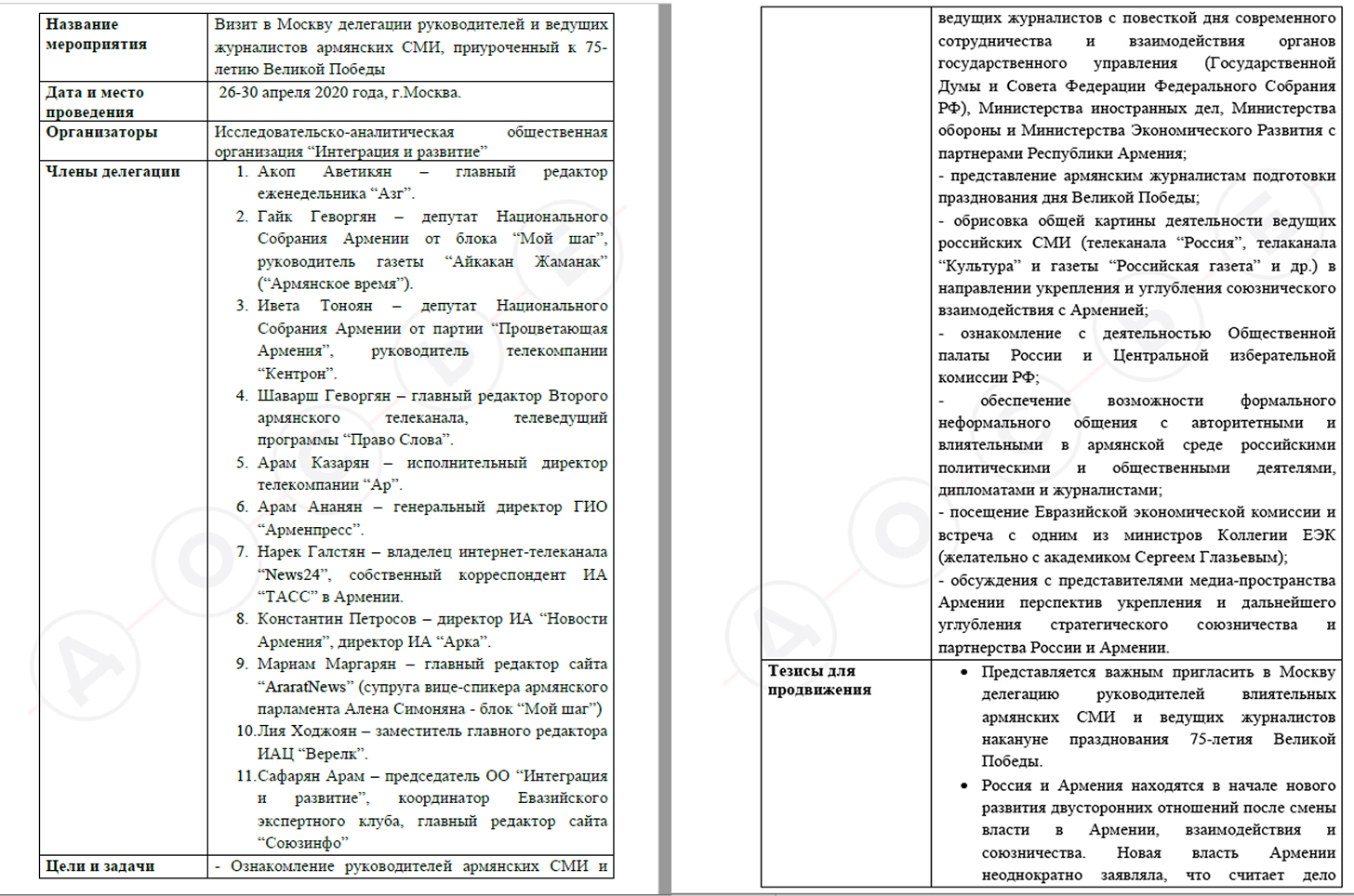 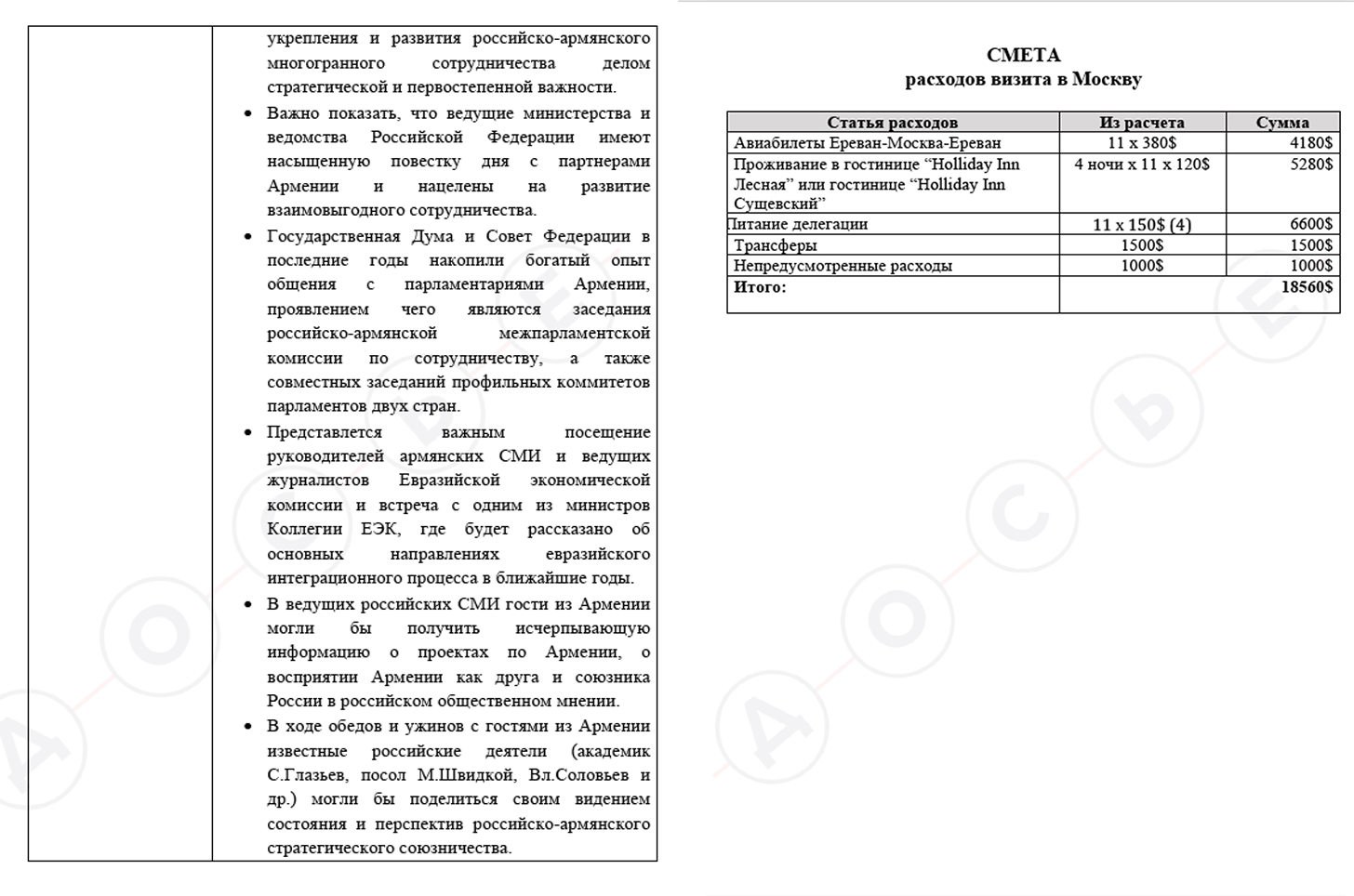 Among the 11 participants, there are two deputies: Gagik Tsarukyan’s spokesperson, PAP MP Iveta Tonoyan (represented as the head of “Kentron” TV) former Publisher of “Haykakan Zhamanak” daily, former director of “Dareskizb” LLC, “My Step” faction MP Hayk Gevorgyan. The name of Mariam Margaryan, the wife of NA Vice Speaker Alen Simonyan, who is presented as the editor-in-chief of the AraratNews website, is also on the list.

The name of Aram Safaryan is also mentioned, who was to represent the website “Soyzinfo” headed by himself. “Armenpress,” “Ar,” “H2” TV companies, “Azg” weekly, 24news.am, “Новости Армения” and Verelq.am had representatives.

The visit organized by the “Integration and Development” NGO, however, has a peculiarity. The structure that is financing it is headed by the representatives of the Russian security forces, including the special services.

The visit was to be financed by the Office of Interregional Cultural Relations with the Russian President. This office is headed by Russian Foreign Intelligence General Vladimir Chernov.

According to the “Dossier,” General Chernov is subordinated to the reserve officer of the Russian Federal Security Service (FSB) Valery Maximov, who is the head of the Department for Coordination of Humanitarian Projects and is responsible for relations with the South Caucasus. His deputy is Valery Chernishov, an officer of the General Intelligence Department (GRU).

Adviser to General Chernov, Colonel of the RF Ministry of Defense Dmitry Avanesov is responsible for relations with Armenia. Aram Safaryan was in correspondence with Avanesov. The “Dossier” quotes Avanesov’s letter to Safaryan, where he asks Safaryan to present the expenses for the organization of the website, meetings, events by the end of the day, as the office was conducting an audit.

Safaryan answered him, “Everything will be done” (“Все будет сделано”).

Aram Safaryan worked at the Ministry of Foreign Affairs, the National Assembly, and is currently a member of the Public Council

Aram Safaryan has a rich biography. In the 1990s, he held a number of positions in the Ministry of Foreign Affairs. For about three years he was the press secretary of the ministry, the “cultural relations advisor” of the RA Embassy in Iran, and then the director of the ministry’s state protocol department.

During his journalistic career, he worked for “Prometheus” (now H2) TV channel, “Zhamanak” weekly.  In 2005-2006, he was the director of the Armenian branch of the CIS Institute in Moscow, and in 2007 he was elected a deputy of the National Assembly, he was the secretary of the “Prosperous Armenia” faction.

After the revolution, in 2019 Safaryan became a member of the Public Council. In addition, he manages the “Integration and Development” research and analysis NGO, coordinates the Eurasian Expert Club, and the “Soyzinfo” website. 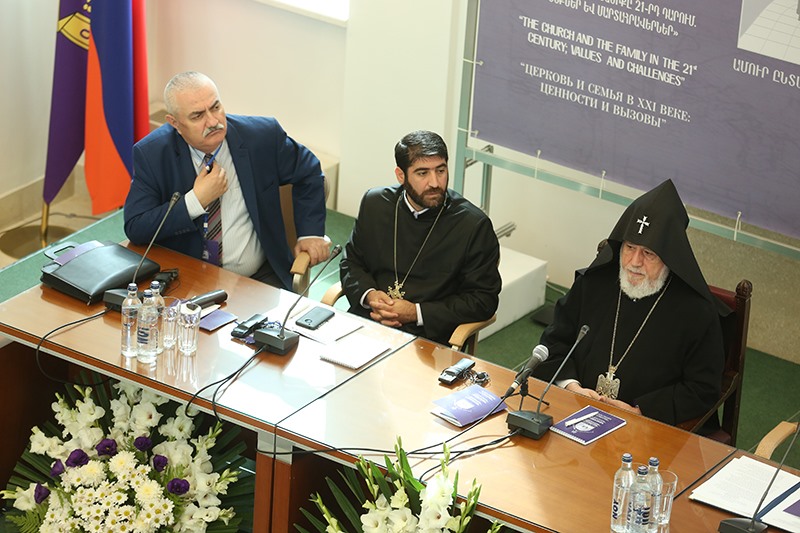 Aram Safaryan “The Church and family in the 21st century. Values and Challenges” international conference

Safaryan is an advocate of Eurasian integration. He stated that Armenia should be integrated into the Eurasian zone not only in economic but also in other directions. According to Safaryan, Russia is the leader of the Eurasian ideology, and Armenia shares the “cultural code” with the common civilizational values.

Safaryan was awarded the “Order of Friendship” by Russia, and the “For Investment in EEU Development” medal by the EEU.