Protests In Belarus And The Armenian TV Channels’ Agenda 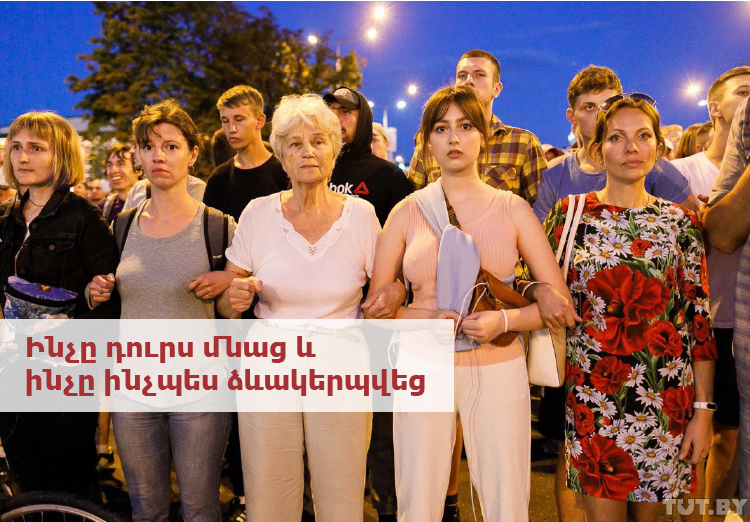 The announcement of the preliminary results of the presidential elections in Belarus was followed by protests. Since August 9, there have been bloody clashes between security forces, “demonstrators” and violence against arrested citizens. The work of journalists was hindered, the internet connection was disrupted, and the President of Belarus saw the hands of foreign forces in the demonstrations.

According to official data, 80.1% of voters received the trust of Alexander Lukashenko, who has ruled the country since 1994.

Svetlana Tikhanovskaya is in second place with a 10.12% result, who led the opposition front after her husband was not registered as a candidate and was arrested.

Leaders of a number of countries congratulated Lukashenko, including Armenian Prime Minister Nikol Pashinyan. A number of other countries have not recognized the election results, there is talk of sanctions.

Tikhanovskaya left Belarus on August 11 and received asylum in Lithuania.

2 deaths have been registered so far. The protests are taking place not only in Minsk, the participants are wearing white clothes with flowers. There have been strikes throughout the country.

These events are in the center of the attention of both the world and the local press. To find out the approaches to the coverage of Armenian TV channels, media.am has studied the main broadcasts of their news since August 10.

Public Television: The things we wouldn’t know about by listening to them

If we had watched the main news program of Public Television for six days and considered that this was our only source of information, we would not have known that in Belarus:

On August 11, the commentator of “Lurer” said that the presidential candidate Tikhanovskaya called on her supporters to respect the law, not to resist the police, not to hold rallies (in the video from 20:50).

However, Public TV did not inform that the opposition candidate had spread two videos on the same day, with different content, in different places.

In the first published video, which was not touched upon by Public TV, Tikhanovskaya hints that she left the country fearing for her children. She received asylum in Lithuania.

The day before leaving Belarus, on August 10, the opposition candidate was detained for about 7 hours when she went to the Central Electoral Commission to appeal the election results.

And in the second video, which was referred to by Public TV, Tikhanovskaya reads from the paper the call to stop the demonstrations. Moreover, this text is read in the office of the head of the CEC of Belarus. The discovery was made by the Conflict Intelligence Team. They came to this conclusion as a result of identifying some items in the room.

The same discovery was made by meduza.io.

Kentron: Did not talk about the events in Belarus for 3 days in a row

PAP leader Gagik Tsarukyan was one of the first to congratulate the President of Belarus on his victory with the words “good friend and fellow.” Kentron TV, founded by Tsarukyan, had not covered the protests against Alexander Lukashenko for three days.

The occasions of sharing information in the two coverages regarding Belarus for the previous days had been, in the first case, the congratulations to Lukashenko on August 10.

The second occasion is on August 15. Kentron informed about the meeting of the Security Council held yesterday and the telephone conversation of the same day with the President of the Russian Federation Vladimir Putin.

“Aggression is being waged against Belarus,” said President Alexander Lukashenko, warning of the threat of foreign interference in the country in the scenario of a color revolution,” the TV commentator said (in the video from 1:18).

The news-analytical programs of ArmNews TV are on vacation. However, the TV channel referred to the events in Belarus in the format of a “Live Speech.”

This is a series created during the vacation period, in which the authors of two different programs broadcast by this TV company, Arman Saghatelyan and Karen Bekaryan, analyze topics. In this issue, they tried to find Belarus “between myths and reality.”

Channel 5: Official information is not an unconditional truth

Channel 5 actively covered the post-election events in Belarus. Two factual inaccuracies were registered in one of the materials.

❌ In the program referring to the August 11 incident, the author of the report informed, “Two hours later, Tikhanovskaya recorded the second video, where she called on the protesters not to take to the streets anymore” (in the video from 5:34).

We referred to this video and news in the Public TV section of the article. In this case, it remains to add that the video was not recorded, but was published later.

❌ At the end of the report, journalist Lilit Gasparyan said, “The police wanted to disperse the protesters with rubber bullets when an explosive device exploded in one of the protestor’s hands. The demonstrator has died” (in the video from 7:05).

This was not confirmed information, but the official opinion of Belarus,  which contrasted the circulating option where the protesters were being killed by an open fire.

This last version was later confirmed by the journalists checking the facts. It is seen in the combined videos that it is not an explosion, but a shot.