False And Denied News Between July 16-31 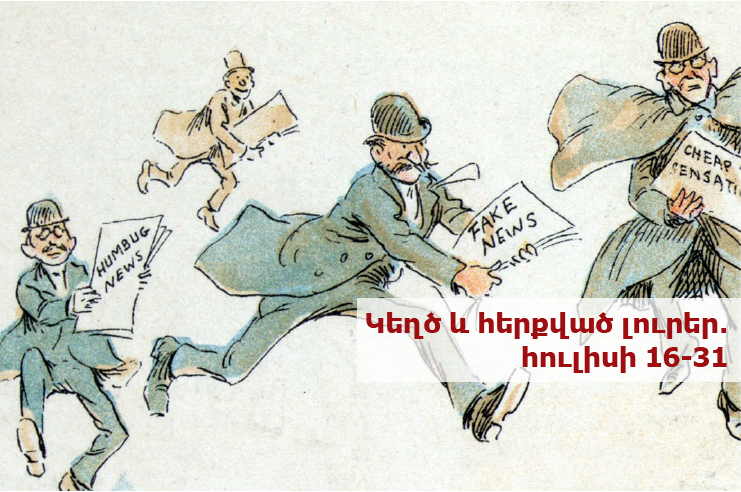 In the second half of July, the escalation of the Armenian-Azerbaijani border brought on a new wave of information war. One message from the National Security Service was puzzling, the other was a mistake. An old picture was presented as new, and the media lost lawsuits for publishing slander and false content.

News that was true, but published before official statements, is not misinformation

In July, during the tense situation at the border, the NSS released a video-announcement. In it, the media and public were called on not to use Azerbaijani information resources, to avoid provocations and dissemination of unverified information.

The NSS posted examples of “misinformation” in the video. The Azeri websites, the posts of propaganda-users and the news from one of the most authoritative media outlets in Armenia, hetq.am, “Azerbaijani armed forces shelled Aygepar village” were placed on the same plane.

Later, in response to a query, the NSS clarified that hetq.am had published the news earlier than the official sources had made verification, thus it was “misinformation.”

Misinformation is a term that means false, untrue information.

“Checking the news and facts with such a chronological methodology, moreover, putting such an explanation in the official letter, testifies to the fact that the NSS has a delicate neurological surgical function, which it performs with an ax and a hammer,” Nune Hakhverdyan wrote a review for media.am on this topic.

The mistake by the NSS: The poll was not from the Azerbaijani special services

In a July 24 statement, the NSS informed that the Azerbaijani special services were using Armenian phone numbers ostensibly to conduct intelligence information on the situation in the armed forces for independent investigations.

The NSS also published two phone numbers that made such calls, with codes 094-093, which belong to Viva-MTS.

The operator responded on the same day and informed that the numbers mentioned by the NSS were provided to a legal entity for conducting professional sociological surveys, “and the server and network systems were not hacked or damaged and continue to operate smoothly.”

According to Viva-MTS, it turns out that the NSS made a mistake.

At this moment, the phone numbers have been removed from the text of the message which is still available on the NSS website.

In July, in the field of information warfare, Azerbaijan resorted to other methods besides DDoS attacks, propaganda and misinformation on state news websites.

Bishop Bagrat was not photographed in the “Fearless” position

Though the news of taking the “Fearless” position had not been commented on officially by the Ministry of Defense, the news had spread and military experts had commented on its strategic importance. And in the media field, a photo of the leader of the Tavush Diocese, T. Bishop Bagrat Galstanyan at the position was “found.” 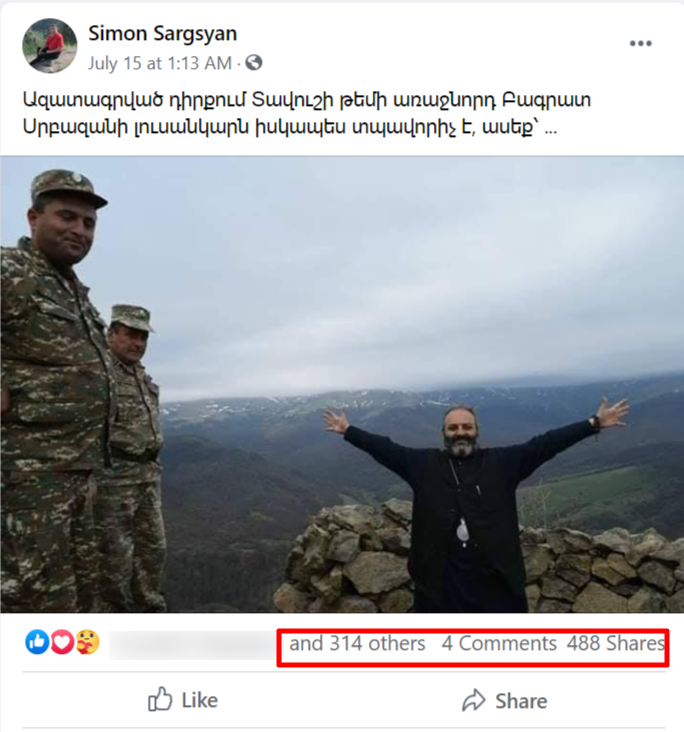 Screenshot: The publication of Simon Sargsyan, the editor of the Mitk.am website

This news reached ArmNews TV. The author of the “Agenda” program said that “it is an influential photo,” “it is in one of the newly conquered positions,” “Azerbaijani settlements were far away, we had a dominant position” (in the video from 2:16 minutes).

Browsing through Bishop Bagrat’s Facebook photos for a few minutes reveals that the picture is not only old but has been published several times, the first of which was on April 26, 2017. The bishop made a post about the misinformation of the news.

This position became the subject of another conversation. On July 23, former Minister of Defense Seyran Ohanyan made a post demanding that hrapark.am editor Armine Ohanyan “deny and then remove the material that does not correspond to reality and which contains slander.”

The reason for the demand was the article “The positions we took were ours,” in which, on behalf of Lieutenant General Norat Ter-Grigoryants, it was written that “These positions, when I was building an army, these positions were our positions. When Seyran Ohanyan was the Minister of Defense, the Turks took those positions.”

Seyran Ohanyan informed in his post that he had talked to Ter-Grigoryants, the latter said that he had not made such a statement. The website posted an excerpt from the interview, where the lieutenant general really had expressed such an idea.

On July 31, Deputy Prime Minister Tigran Avinyan announced that the Court of First Instance had upheld his lawsuit against Politik.am. According to his promise, the entire monetary compensation of 1 million AMD was “directed to the payment of tuition fees for two outstanding students of the YSU Faculty of Journalism.”

This post is no longer available, but reprints are available on other sites.

In response to Avinyan’s post, the editor-in-chief of politik.am, Boris Murazin informed, “They are trying to use this circumstance to put pressure on the media financially, to show that they will be punished if they make such publications” (in the video from 10:06). Muraz informed that this idea was directly told to him by a member of Avinyan’s team, and he kept his promise and did not pay a single penny to Avinyan.

Medieval literature is in the school curriculum

Deputy Minister of Education and Science Zhanna Andreasyan denied the accusations of “cutting down the tree from its roots.” Opponents of the ministry made two main accusations:

a. Medieval Armenian literature has been left out of the school curriculum, instead, works of contemporary world writers have been included

During Azatutyun.am’s “Facebook press conference” on Azatutyun.am, the Deputy Minister suggested that everyone gets acquainted with the list of literature posted on the Ministry page, to see for themselves that “Narekatsi, Khorenatsi and other classics have their place in the literature program and that they are not left out by any means.”

📌 Nikol Pashinyan’s daughter Shushan Pashinyan filed a lawsuit against Narek Samsonyan. The subject of the lawsuit was the latter’s Facebook post that Nikol Pashinyan buys black caviar at $3,000 a month for his daughter.

Shushan Pashinyan demands that Samsonyan deny the defamatory information and compensate with 2 million AMD for the damage caused to her honor and dignity.

In March of this year, the court did not accept Shushan Pashinyan’s lawsuit of the same content, as the provisions of Articles 121 and 122 of the Civil Procedure Code had not been observed. They refer to the requirements of the documents submitted to the lawsuit.

❌ Official Georgia denied the news spread in the press that grenade launchers were delivered to Armenia from Russia and Serbia through its country’s territory.

❌ Azerbaijani propaganda haqqin.az posted a photo of Narek Petrosyan, born in 2000, in military uniform, and wrote that he had allegedly died in the border area of Tavush. This news was denied in the comments by the young man who had been presented as “dead.” 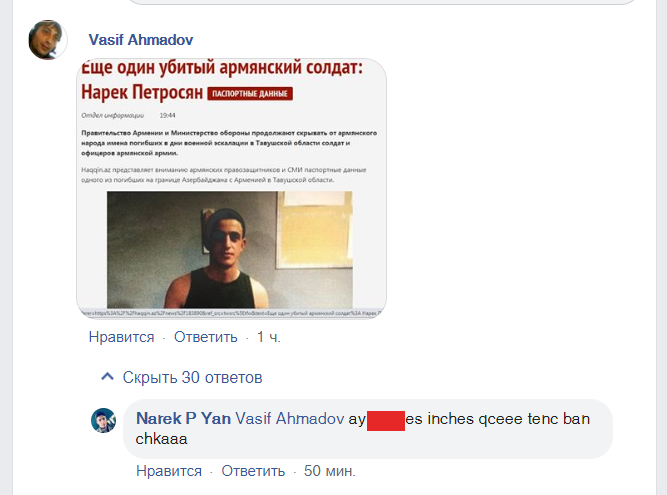 ❌ News.am published a denial 4 years after its publication. The website informed in a short paragraph that the news published on March 18, 2016, presented defamatory information about Gevorg Karapet Mkrtchyan.

❌ The Ministry of Emergency Situations denied the rumors that the employees of the Tavush Regional Rescue Department are calling for the evacuation of the population.