France Arménie And Hraparak.am Do Not Accept Responsibility For Spreading False News

On July 8, hraparak.am, referring to the France Arménie magazine published in France, wrote that Arsen Torosyan had invited French doctors to Armenia and paid them for their seeming humanitarian aid, and he did this without an agreement with the French government.

According to the publication, the visit of the Frenchmen cost € 200,000, and the doctors who stayed at the luxurious Marriott Hotel each received a salary of €1,800.

The news was reprinted by many other news outlets, including the most visited news.am website. However, both France Arménie and hraparak.am spread false information. 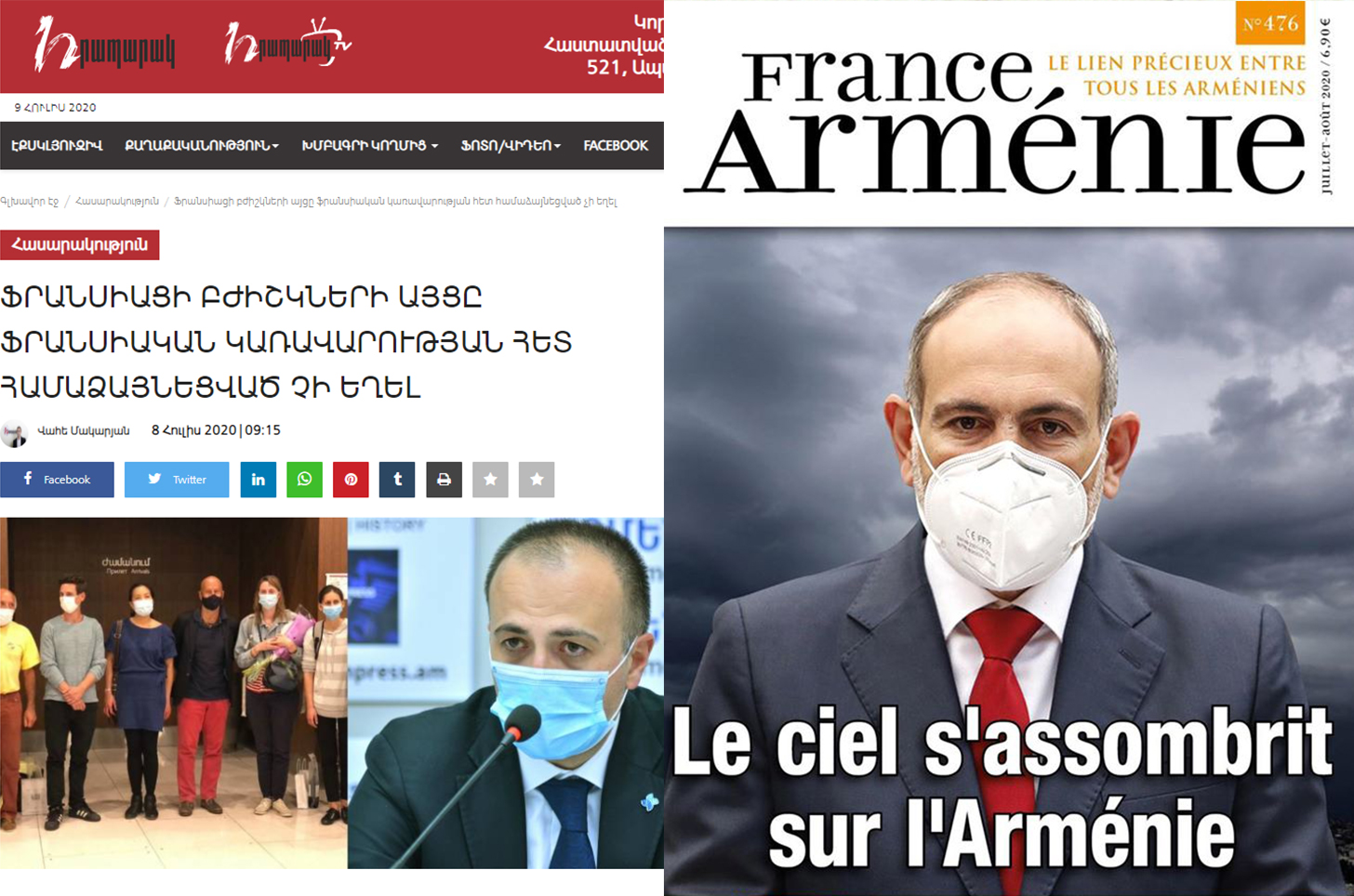 Media.am contacted France Arménie, as well as studied the article by hraparak.am, the site’s further reactions and denials. Both media outlets avoid responsibility and urge that the questions be addressed to their sources.

The Armenian government did not provide €200,000 and the doctors were not paid

The visit of the doctors was organized by the Office of the Chief Commissioner for Diaspora Affairs. In a conversation with Media.am, the office denied the circulated information․ The doctors, who were not paid, and the mentioned amount of expenses, €200,000, do not correspond to reality.

Moreover, the Armenian government did not pay for the doctors’ visit. The doctors did this voluntarily. The organization of the first group visit was financed by USAID, and the second by the French Embassy in Armenia.

The US Embassy informed us that the United States has already provided $6,000,000 in assistance to Armenia in the fight against Covid-19. $60,000 was provided by USAID to the Office of the High Commissioner for Diaspora Affairs to cover the cost of a flight of French doctors, accommodation, accommodation and translators.*

The US embassy also denied the news about the doctors’ remuneration. Alexander Mignon, one of the doctors who arrived, denied the information, calling it “nauseating news.”

The publication of France Arménie says that the choice of doctors was made without taking into account their professional skills and experience in the fight against Covid-19. However, Alina Nikoghosyan, spokeswoman for the Ministry of Health, told Media.am that the selection of doctors was coordinated with the ministry. The Ministry of Health noted that there is a special need for a resuscitator, “anesthesiologists and resuscitators arrived from France.”

Hraparak.am responded to the denials a few hours after the publication containing false information. “It simply came to our notice today that the existence of [France Arménie] was put in doubt. We place the picture on the 11th page of the magazine. The article in question is on page 11.”

The site, however, manipulates․ The denial does not question the existence of the source but verifies the authenticity of the information spread by Hraparak.

The source was the opinion of one doctor

The information was originally published in the July issue of France Arménie magazine.

This magazine is headed by Harut Martirosyan, who is the head of the Defense Committee of the Armenian Cause (Comité de Défense de la Cause Arménienne). This structure was founded in 1965 by the Armenian Revolutionary Federation and is connected with the activities of the party.

France Arménie, referring to French-Armenian doctor Jean-Michel Egerian, wrote that the first visit of French doctors to Armenia was organized through unusual diplomatic ties. The author (his name is not known, the article writes “H.M.” in its place) notes that the first visit was not coordinated with the relevant official body of France,” despite the statement of the French Embassy in Yerevan.” 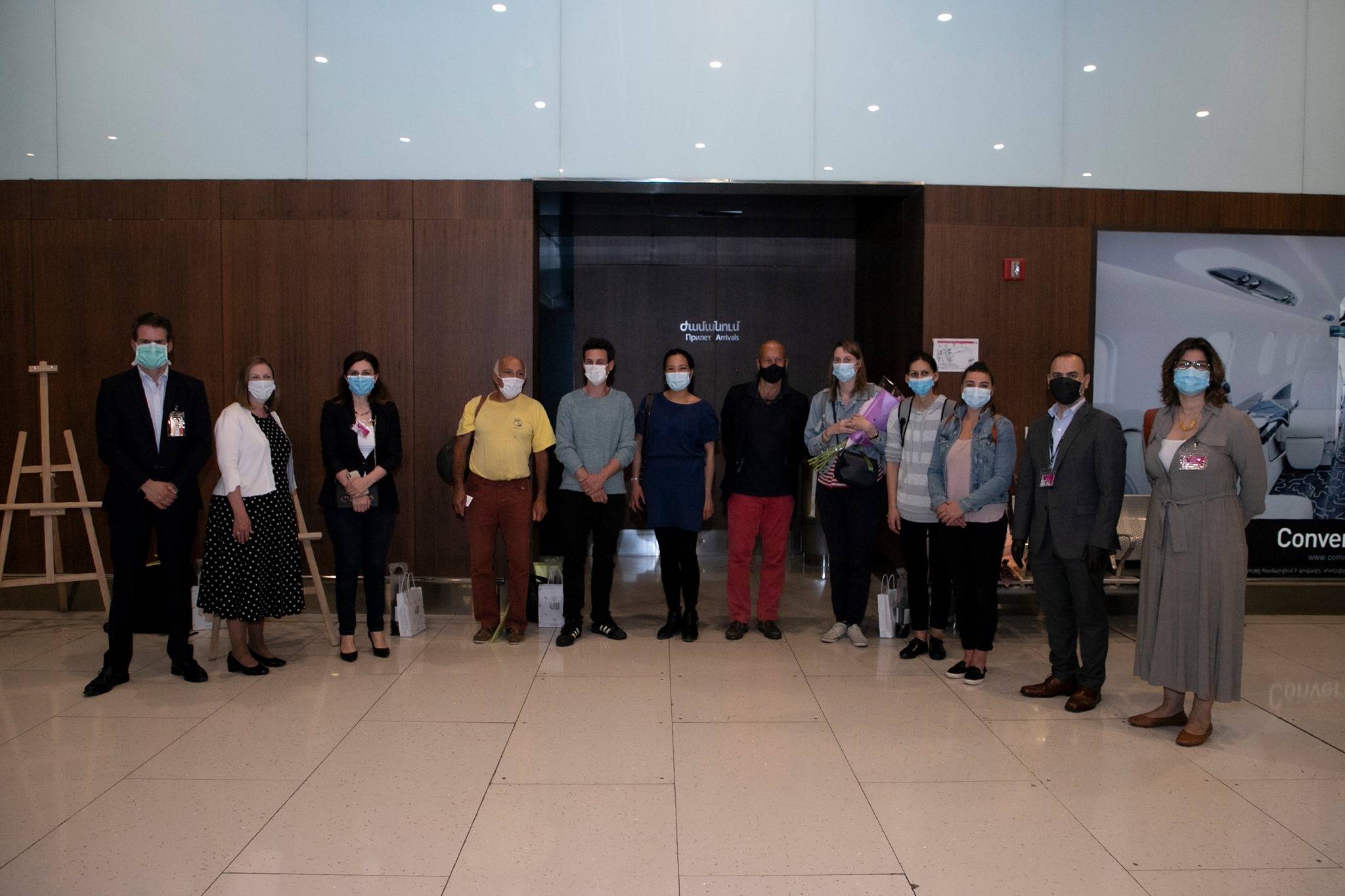 This is an incomprehensible statement: The embassy is the official body representing France, and the first group of doctors was met at the airport by both the US and French ambassadors. Responding to press reports, the embassy said it was aware of the visit and was in constant contact with the doctors.

Media.am contacted France Arménie director Harut Martirosyan. Martirosyan did not answer our questions, urging us to find out all the details from Dr. Jean-Michel Egerian. Egerian did not want to comment on the allegations made in the publication, as well as the information about the amount of €200,000 spent.

Hraparak.am rewrote the original article without checking it and added parts of its own

Journalist Vahe Makaryan, who wrote the article for Hraparak.am, not only spread the information of France Arménie without checking but also added biased rhetoric.

Thus, in Makaryan’s text, the “humanitarian aid” of French doctors is already in quotation marks, and Minister Torosyan is “independently” inviting doctors to Armenia.

Such categorization, “from Turkey” and other statements are discriminatory․ Many Armenians living in the Diaspora and in Armenia were born in Turkey. And the name Samson Ozararat appears in 1998 as part of the official delegation of the Republic of Armenia to the Summit of the Soviet Economic Cooperation.

On July 9, Hraparak.am Editor-in-Chief Armine Ohanyan touched upon the denials of their article. Ohanyan complained that the media outlet she headed was “closing its mouth”; she was surprised that the false information spread by “Hraparak” was denied. Ohanyan urged the journalists not to deny the spread misinformation, because “working against each other […] is not a partnership.”

* The US Embassy’s comment was added to the text a few hours after its publication.