Gagik Tsarukyan, who was recently deprived of his immunity and accused of a criminal case, is not only the leader of the largest parliamentary opposition force in Armenia, but also one of the richest people in the country. Hetq.am has calculated his declared means – 99 billion AMD or 206 million dollars. Tsarukyan’s real means may be greater.

Tsarukyan founded the Prosperous Armenia Party in 2004. Media.am studied the biographies of the party’s incumbent deputies and found out that 14 of the 26 deputies were Gagik Tsarukyan’s relatives, former journalists of the TV company he founded, former employees of his business companies or people affiliated with the Armenian National Olympic Committee.

Gagik Tsarukyan’s two sons-in-law have been elected to the National Assembly at different times. 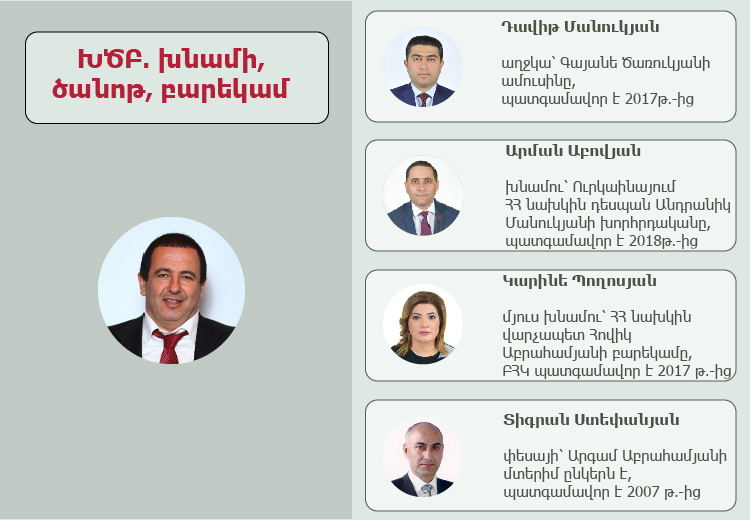 Gagik Tsarukyan’s daughter Gayane’s husband, David Manukyan, has been a deputy since 2017. The latter is the son of former RA Ambassador to Ukraine Andranik Manukyan.

After the revolution, Arman Abovyan, an advisor to Tsarukyan’s brother-in-law, Ambassador Andranik Manukyan, was elected a deputy in the early parliamentary elections.

Now Abovyan is the secretary of the Prosperous Armenia faction. His wife, Natalia Bukovskaya, declared an income of about 105,000 AMD, which she received from Tsarukyan’s Multi Group Concern LLC.

Tsarukyan’s other son-in-law, Argam Abrahamyan, is also a deputy. He is the son of former Prime Minister Hovik Abrahamyan and has been a deputy of the “Tsarukyan bloc” between 2017-2018. 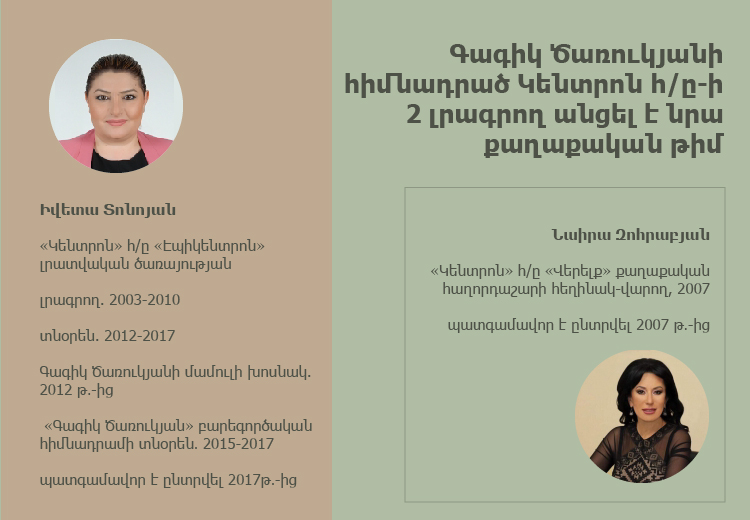 Naira Zohrabyan, Chair of the NA Standing Committee on Human Rights Protection and Public Affairs, has worked for the “Aravot”, “Hayots Ashkharh” and “Haykakan Zhamanak” periodicals. In 2007, she authored and hosted Kentron TV’s “Verelk” political program. In the same year, she was elected a deputy by the proportional list of the “Prosperous Armenia” party.

Another MP, Iveta Tonoyan, started her professional career as a journalist for the “Epicenter” news service of Kentron TV. In 2010-2012, when Hrachya Rostomyan, a member of the Prosperous Armenia Party (PAP), was the Minister of Sports and Youth Affairs, she worked as the head of the ministry’s public relations department. Then she returned to Kentron as the director of the news service. Tonoyan is also a member of the Board of Directors of Kentron TV.

Employees of “Multi Group” concern and other organizations

Five deputies of the National Assembly have worked or are working in the organizations founded by Gagik Tsarukyan. 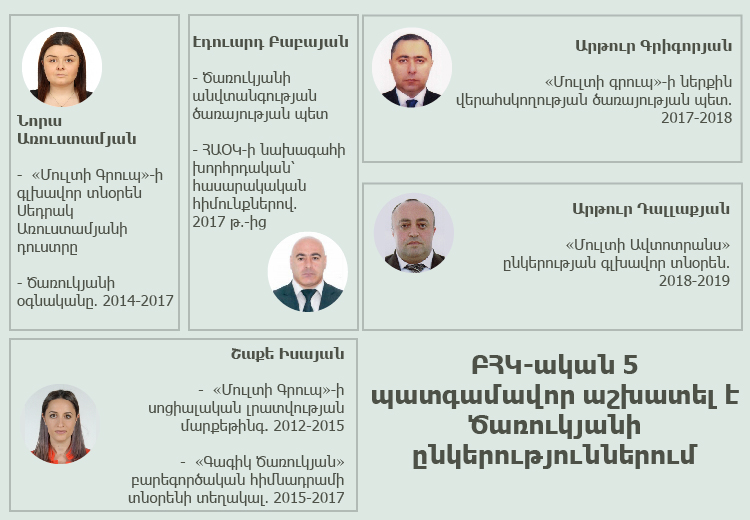 Shake Isayan in 2012-2015 has been working in the social media marketing of “Multi Group” concern, then for two years, he worked as the deputy director of the “Gagik Tsarukyan” charity foundation’s Iveta Tonoyan. In 2017, he was elected a deputy of the Prosperous Armenia Party.

Nora Arustamyan is the daughter of Sedrak Arustamyan, General Director of Multi Group Concern. In 2014-2017 she worked as Gagik Tsarukyan’s assistant, then became a PAP deputy. She calls Gagik Tsarukyan her “childhood hero.”

In 2018, Artur Grigoryan, the head of the Multi Group’s internal control service, also became an MP.

Artur Dallakyan, General Director of Multi Autotrans Company, which belongs to Tsarukyan, also became a deputy in 2018 after the revolution.

Finally, after the revolution, the head of Gagik Tsarukyan’s security service, Eduard Babayan, became a deputy. The latter was sentenced to 3.5 years in prison in 2019 on charges of assaulting another person but was released on amnesty.

Persons affiliated with the National Olympic Committee of Armenia

Gagik Tsarukyan has been the head of the National Olympic Committee of Armenia (NOCA) since 2004. Several PAP deputies are connected with this structure. 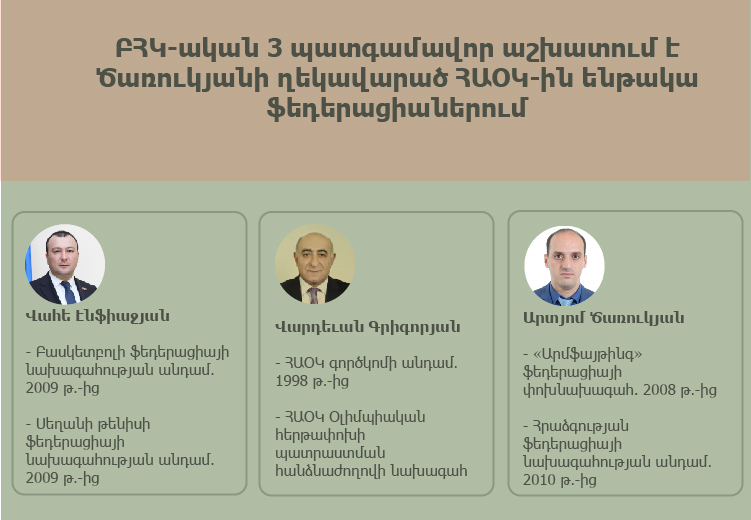 Two PAP MPs, Artyom Tsarukyan and Vahe Enfiajyan, are members of the Presidency of Shooting and Basketball Federations, respectively.

These federations receive funding from the government. However, the state budget is not the only source of funding. They also receive financial support from the Armenian National Olympic Committee and train at the “Olympavan” center built by Tsarukyan, and so on.

The President of the Basketball Federation is the Secretary-General of the Armenian National Olympic Committee Hrachya Rostomyan, who was the Minister of Sports and Youth Affairs and worked as the Minister of Emergency Situations for several months after the revolution.

The vice-president of the basketball federation notes that the success of the athletes is conditioned by the fact that they can live and train at the “Olympavan” center built with Gagik Tsarukyan’s personal funds.

PAP MP Vahe Enfiajyan is a member of the presidency of the Basketball Federation.

A number of PAP deputies are connected with Gagik Tsarukyan through the National Olympic Committee, Kentron TV, Multi Group and other organizations. Some deputies have personal, friendly ties with the PAP leader.

Media.am will soon touch upon the practical, labor and national ties of the NA deputies from other parties.