False And Denied News Between June 16-30 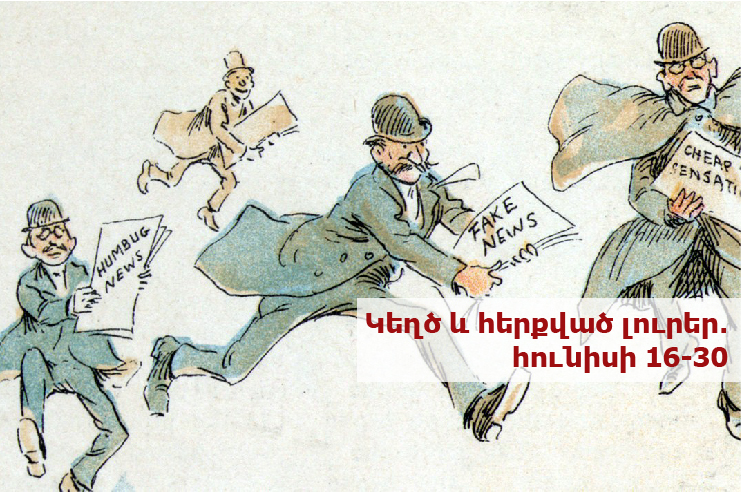 In the second half of June, apart from the pandemic, the developments around the PAP and the Yerevan fire became the cause of misinformation and manipulation. The media took the bait of a fake Facebook page again.

PAP-ian posts: who confirms and who denies

On June 15, the National Security Service released a video of the search of Gagik Tsarukyan’s private house. The leader of “Prosperous Armenia,” as was the case with the staff, had promises and commitments signed by 4 members of his political team to secure votes in the 2017 National Assembly elections, as well as other promises and signatures.

❌ Naira Zohrabyan denies the quote attributed to her, which states that “The piece of paper that is being distributed is cheap misinformation, and if I wasn’t too lazy, I would turn to the local militia.”

❌ Sergey Bagratyan had no problem with laziness. According to a Facebook post (which has been removed), he “named the person in charge” and stated that the information did not correspond to reality. I will apply to the court in the near future … ” He later added that he would do so the very next day.

However, 17 days after the post, there is no such lawsuit in the judicial information system datalex.am. Instead, there is the 2009 verdict against Bagratyan for malicious tax evasion.

✅ Tigran Urikhanyan, who was elected by the PAP team and now acts as an independent deputy, confirmed what was attributed to him on his Facebook page.

✅ Former PAP MP Napoleon Azizyan also confirmed the authenticity of his post in a conversation with lragir.am.

Armlur.am wrote about their information stating that Tsarukyan would not participate in the NA sitting to deprive him of his parliamentary immunity. However, the information turned out to be a failed prediction. The PAP leader was in the hall on June 16, gave a speech, he also answered the journalists’ questions. However, this is not the only example of misinformation on this topic.

In June, Media.am wrote about the misleading international press coverage of the local developments around the PAP leader.

The sports world became involved in the developments around the PAP leader, and as a result, some athletes became the target of misinformation and media manipulation. Hraparak.am was especially active in this case.

On June 17, an emotional text was published with the title “Kyaram’s brother Roman ․․․” In it, the author connected the wrestler, multiple champion Roman Amoyan, who came to support Gagik Tsarukyan, with Kyaram Sloyan, who was beheaded in April 2016, purely on the basis of national affiliation.

The next day, on June 18, the same website reminded the world of the transgender athlete Mel Daluzyan in parallel with Amoyan. The website claimed that there is discrimination based on sexual orientation in Armenia. The article emphasizes Daluzyan’s sex change, and the part of Amoyan’s disobedience to the police’s request was bypassed.

Then, on June 19, the website circulated rumors about Arthur Aleksanyan, an athlete and Olympic champion, who did not protest for Tsarukyan.

Allegedly, the government promised to open a sports school in his name, and in 2021 to nominate Alexanyan as a candidate for mayor of Gyumri. The website presented all this as a political deal to “snatch” from Tsarukyan.

The Yerevan fire: what conspiratorial purposes was it for?

On the evening of June 26, a large-scale fire broke out near the Yerevan Sports and Concert Complex. An area of about 21 hectares was burned. While the fire was spreading and its footage was circulating, Hakob Karapetyan, the spokesman for the mayor of Yerevan, wrote, “Let’s just say that about half an hour ago there was a huge fireworks display in that area.”

In recent months, former members of the Yerevan Council, who have been spreading conspiracy theories and misinformation about the coronavirus, have sought and found conspiracies in this situation.

In particular, Marina Khachatryan wrote, “People, is the museum being set on fire to be destroyed? How can we go and help … I am ready …” And her ideologue Sona Aghekyan was at the scene.

In a live interview with several news outlets, she announced, based on assumption, that the areas are being burned on purpose so that the Czech Republic’s richest people could build business centers (see 1:39:42).

Content from a fake page was spread in the media

Arman Babajanyan, an independent member of the National Assembly, founded the “For the Republic” political initiative in late May. There are two pages of the same name on Facebook, one real and one fake.

The fake page not only shares content from the real page but also mixes trolling content and spreads misinformation. The last example was spread after a meeting took place between the members of the initiative and Artsakh President Arayik Harutyunyan on June 27.

First, the fake page wrote that Arman Babajanyan “during the meeting offered to discuss the Nagorno-Karabakh conflict within the framework of Levon Ter-Petrosyan’s ‘War or Peace?’ ideology.”

This content was spread by the media, including the website 1in.am which was founded by Arman Babajanyan and which later removed the material. We get information about this from the link posted on the fake page. 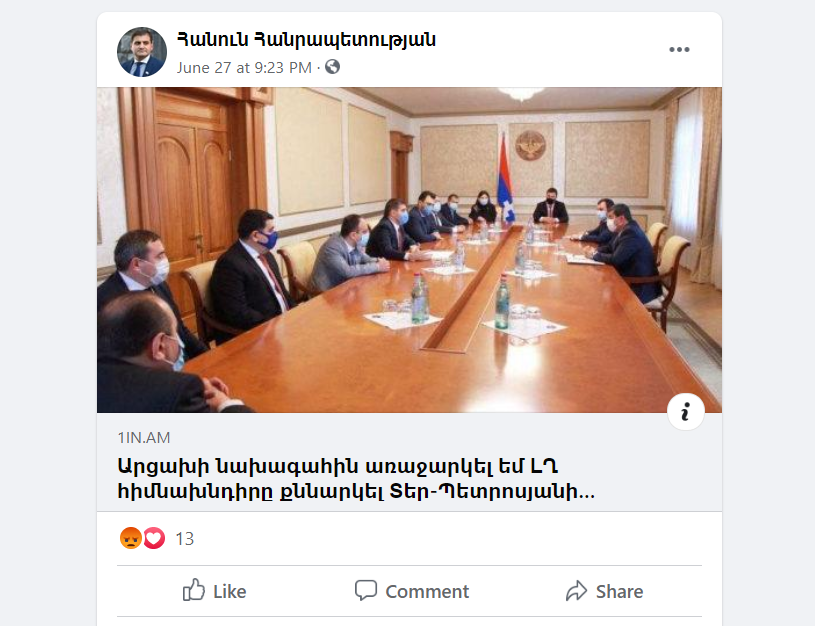 The message was spread from the real page a few hours later. The next day, the page announced the existence of a fake page of the same name.

It is noteworthy that the NKR President’s spokesman also took the bait of the fake page. Vahram Poghosyan demanded on his Facebook page “not to distort the content of the discussion during the meeting and to publicly apologize for the false publication.” He later removed the post.

In the second half of June, both the news outlet and the Prime Minister and his spokesman made demands for refutations.

📌 On June 20, Edmon Marukyan, the leader of Bright Armenia, wrote on his personal page that he and his two party members were going to file lawsuits in connection with the “false news” spread by 1in.am the day before, with “demands to publicly deny the factual data which is considered defamatory and to apply a measure of responsibility.”

1in.am wrote that “BAP leader Edmon Marukyan, along with party members Armen Yeghiazaryan and Taron Simonyan, met with the third president of Armenia Serzh Sargsyan in the latter’s private house.” After the head of the BAP denied the news, the news outlet added that although the news was denied, “the news is accurate and corresponds to reality.” It is noteworthy that the website used an old photo of the Marukyan-Sargsyan meeting.

📌 Former Chairman of the State Revenue Committee Gagik Khachatryan, his sons Gurgen and Artyom Khachatryan have filed a lawsuit against Prime Minister Nikol Pashinyan and his spokeswoman Mane Gevorgyan. They demanded an apology for the insulting remarks and denied the defamatory information.

❌ On her Facebook page, human rights activist Zaruhi Hovhannisyan denied the news spread by the editor of analitik.am website Ani Hovhannisyan. She said her husband had never been the founder of any gallery.

❌ The State Revenue Committee denied the news of exporting iPhones from Armenia to Moscow.

❌ The Artsakh Defense Army denied the information of the Armenian side opening fire in the direction of a village in Azerbaijani.

❌ The President’s Office informed that no additional money had been allocated from the state budget.