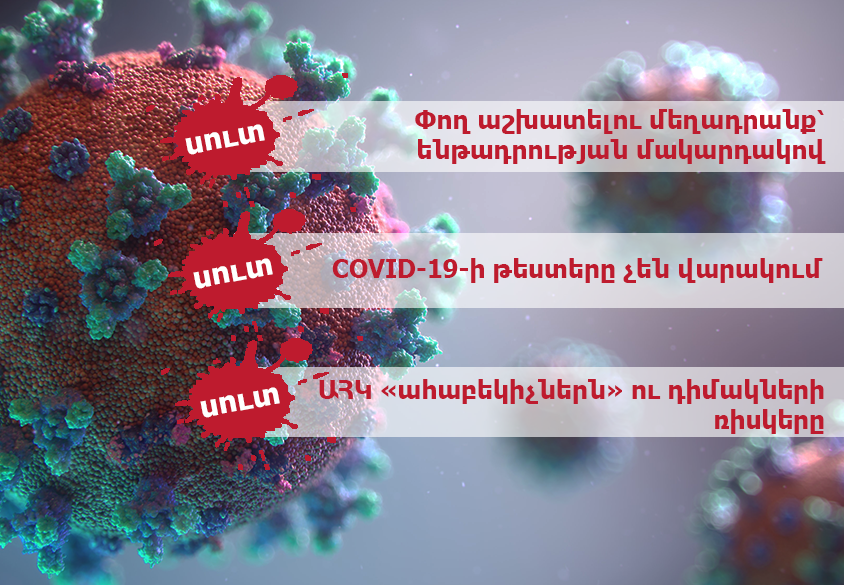 Media.am presents the misinformation and conspiracy theories spread about the epidemic over the past seven days.

The anti-propaganda regarding the use of masks intensified after the misleading statement of the World Health Organization. It had fit into the political context, and people continued to accuse the authorities of making money on the days of the epidemic.

Accusations based on assumptions

On June 7, film producer Armen Grigoryan made a profanity-filled post on Facebook. He accused the authorities of “betrayal” of “making money at the expense of people’s deaths.”

In this post, Grigoryan, a participant in the Russian KVN project, countered the authorities’ claims that there was no space in hospitals. He insisted that “huge” hospitals in Yerevan were empty and that there were places in their resuscitation departments. But since those hospitals belong to the “former ones,” they are not cooperating with them.

He made a similar statement regarding the lack of medical staff and with the problem of testing. According to him, the ministry cooperates with the laboratories of the minister’s friends. Then he concluded that the anti-epidemic struggle has failed, we have so many deaths, because “the boys are earning money.”

This publication was reprinted by a number of websites, including lurer.com, yerkir.am, 168.am, etc., without editing the swearing. As of June 14, the post received 1,100 responses and was shared 577 times.

Three days after the post, Grigoryan was hosted by 168․am’s “ReView” program. The latter clarified how he made such accusations based on an assumption.

“I was dying for information, and the information I had was circling in my subconscious, I understood that something was wrong. […] It so happened that on Saturday evening I suddenly found out a thing or two, in part, that the third hospital was empty and I found out the exact number of how empty. It happens to me often, I fell asleep, I woke up on Sunday and the puzzle fell into place, I understood what had been done and why it was done.” – 3:33 in the video.

The Minister of Health touched upon this issue during a briefing with journalists on June 12.

Arsen Torosyan said that the whole healthcare system was initially involved in this process, in accordance with special principles.

“These principles will always be, yes, there will be medical centers that should stay away from the coronavirus due to central decisions. Because the anti-epidemic and therapeutic principle is that way, because healthcare is not only about coronavirus,” the minister explained.

Are the tests contagious or revealing?

The false news about the tests for the virus being contagious in itself penetrated the Armenian media via a Russian-language source.

On June 10, a number of Armenian websites (armblog.info, ipress.am, yerevanblog.am, yn.am) published a news item with the following headline: “The test does not reveal the disease, but infects you. The whole truth about coronavirus tests.”

The content of the article repeated the title and attached a video. It was published two months ago, on April 17, on the Russian-language YouTube channel called Chelovek. According to the registration of the platform, the channel is in Germany.

Infocheck.am referred to the content of the article, calling it false, explaining the origin of the theory of getting infected via the tests.

In a comment on the website, the National Center for Disease Control and Prevention explained that it is not possible to be infected with tests. Sampling is done with sticks that are in sterile bags, opened only when sampling, after which they are broken in front of people’s eyes and thrown away.

Sona Aghekyan, a former member of the Yerevan Council and currently an opposition activist, announced on Facebook on June 8, “Happiness knocked on my door. The crownvirus has been established with me.”

This news quickly spread in the media: medialab.am, lurer.com, iravaban.net, 24news.am, armdaily.am, etc. Some of the websites even reminded Aghekyan’s position on the coronavirus that it is a myth, masks should not be worn.

However, Aghekyan later confirmed in the comments of the post that she was joking. 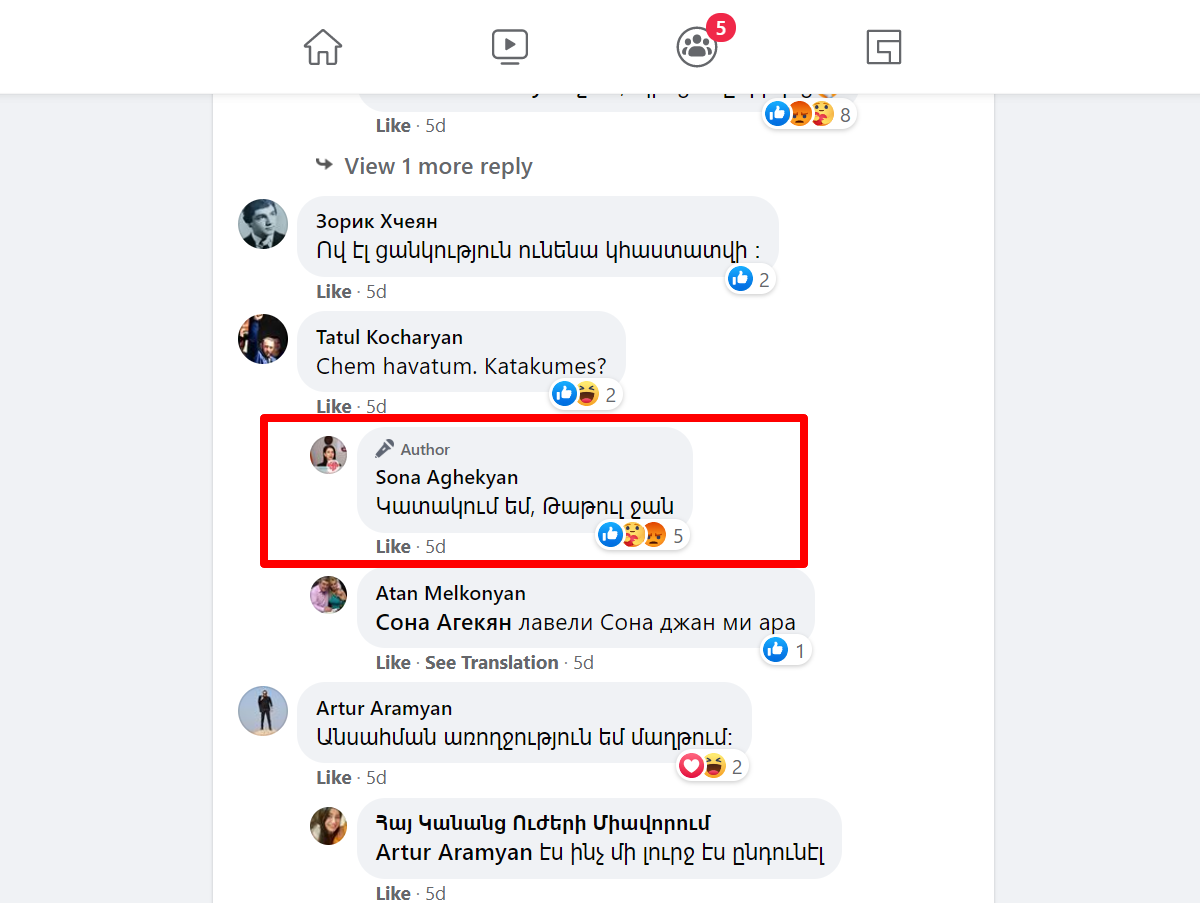 Responses to the WHO announcement

The media and those who spread conspiracy theories about the contagion had another reason to mislead this week. This time the one doing the disorienting was the WHO.

The organization first announced that asymptomatic carriers rarely spread the virus. The author of the idea announced the next day (3 minutes into the video) that there was confusion over her use of the phrase very rare, and “that’s a misunderstanding to state that asymptomatic transmission globally is very rare,” as she was talking about some specific research and data.

Without following the developments of the announcement, disseminators of various conspiracy theories about the virus intensified anti-mask propaganda.

? When both statements were already available, a member of the “HAYK” nationalist movement (of which Pavlik Manukyan, who captured the State Security Service regiment with “Sasna Tsrer” is also a member), named Hrayr Kostanyan called on the public to remove the masks and breathe freely.

With this post of about 500 likes and more than 200 shares, Kostanyan, in fact, called the WHO “Globalist and Liberal Fascist Organizers of Information Terrorism.” Then, in line with the conspiracy theory, he claimed that “thanks to this act of terrorism, the entire network of this agency has been revealed all over the world, especially in Armenia.”

? Historian Armen Ayvazyan concluded that this statement “confirms once again that the forced compulsion to wear a mask and gloves is a mass medical-political crime, which has completely different goals.”

Ayvazyan called the WHO “corrupt bureaucrats” and insisted that by presenting simple truths “they are just trying to avoid the high probability of appearing in court.” He then called for an immediate end to the “degrading and insane regime of masks.” The post was shared 102 times (14-06-2020)

The dangers of a mask

Nune Nersisyan, one of the doctors who spread various pieces of misinformation about the coronavirus, referred to the WHO announcement that was later clarified and put forward her advice towards healthy people, telling them not to wear a mask.

It is worth noting that the other two speakers giving a press conference with Nersisyan were wearing masks. 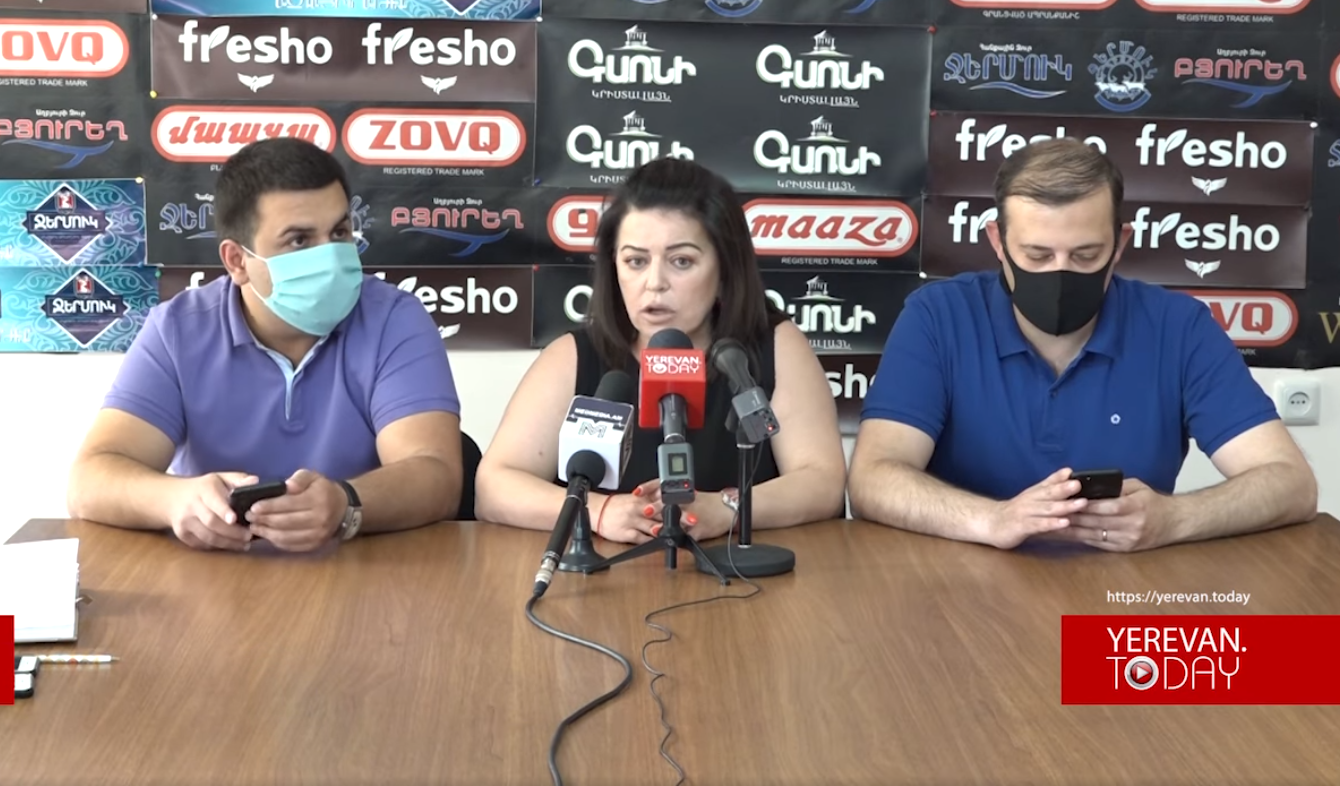 Nersisyan mutilated the WHO employee’s thoughts.

❌ The WHO employee did not say, “Asymptomatic cases are not likely to be contagious,” but spoke of the possibility of the infection spreading.

❌ “During the asymptomatic cases, it is not recommended to wear a mask for healthy people,” the WHO employee said.

Nersisyan, without mentioning any data, said that the mushroom pneumonia has increased in the republic due to the masks. This video has gathered more than 51 thousand views on Yerevan.Today’s Facebook page.

Another doctor who spreads misinformation about the coronavirus, Gevorg Grigoryan, opposes wearing masks during his live Facebook broadcast. Ignoring health risks, he raised a demographic problem.

And on his personal page, Grigoryan considered COVID-19 as a biological weapon and concluded that this was “the beginning of the third world war.” The next hero has spoken about the Third World War in the past.

Karen Vardanyan, executive director of the Union of Advanced Technology Enterprises, not only shares misinformation about the coronavirus on his Facebook page but also distributes conspiracy theories through interviews.

Media.am referred to Vardanyan’s thoughts on the coronavirus with a separate article. His thoughts also found its place in our summary of regional misinformation about Armenia.

Last week, Kentron TV, which has a nationwide distribution, prepared material based on Vardanyan’s conspiracy theory. In it, Vardanyan insisted that the fight against coronavirus did not yield results and caused the collapse of the economy. And “a condition was created for the large population to decrease.”

In the face of all this, according to Vardanyan’s conspiracy theory, there is a global pharmaceutical industry, the purpose of which is to sell a vaccine after creating an atmosphere of fear.

According to Vardanyan, this international fraud is beneficial not only financially but also to the world and local authorities. “In terms of intimidating the population, it seems to them that their power is getting stronger,” he said.

It is worth noting that this TV channel with its connections to the leader of the “Prosperous Armenia” party Gagik Tsarukyan, touched upon the topic a day after the urgent sitting of the political council of the party on June 5. Tsarukyan expressed no confidence in the government and made a proposal to cooperate with healthy opposition forces.

During the same week, on June 6, Vardanyan gave an interview to news.am (13, 248 views 14-06-2020). He reiterated his assertion that the Minister of Health, Arsen Torosyan, should be tried in the Nuremberg trials for crimes against humanity.