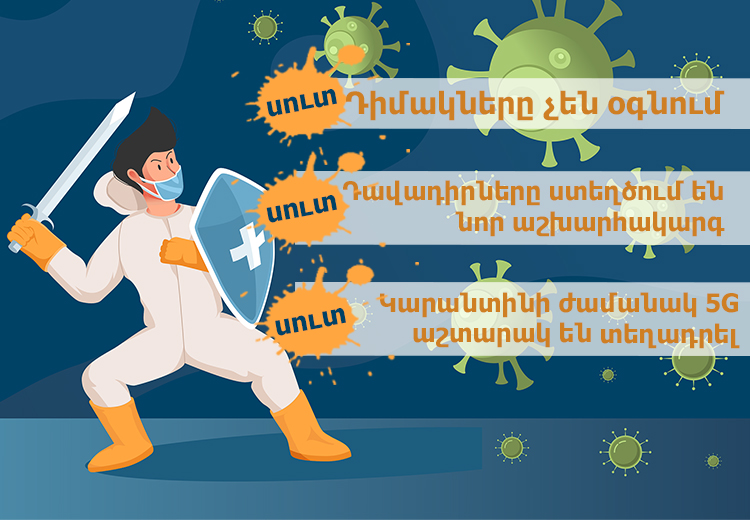 Media.am has collected the myths and conspiracy theories about the contagion that have spread over the past seven days. Many articles, Facebook lives and posts fit into three main stories.

We have also singled out several remarkable cases of myth-spreading in neighboring Georgia and Russia.

The view that masks do not help is common in many countries, and it is difficult to deny ․ After all, a few months ago, the World Health Organization, as well as the Ministry of Health of Armenia, announced that healthy people should wear masks only in special cases.

However, the more information was gathered about this new disease, the more states began to advise or force everyone to wear masks.

In the Armenian government, this advice gained criticism.  Lusine Haroyan-Dallakyan, Prime Ministerial Candidate in the Post-Revolutionary Extraordinary Elections of 2018, posted a photo of a box of masks on May 23, 2020, on which it was written that they would not provide protection against COVID-19.

To date, this picture has been shared 1,400 times. The picture appeared in the comments of various publications on the topic. Hayk Kostanyan, a blogger with tens of thousands of views on conspiracy theories, referred to it. 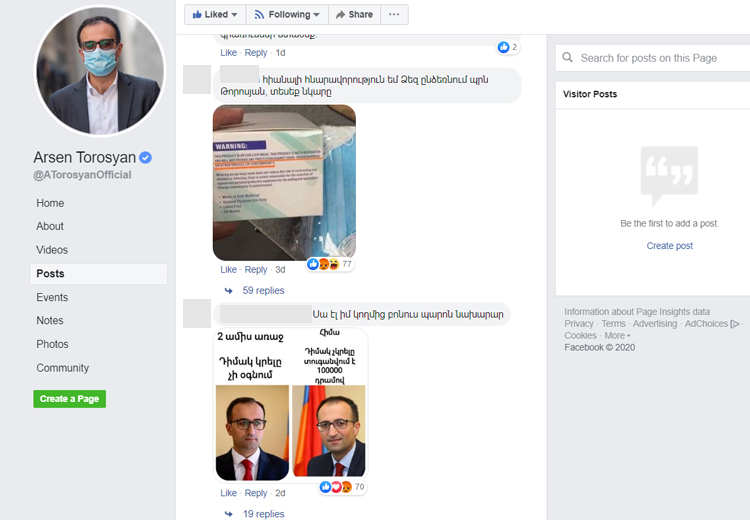 The deputies of the “Bright Armenia” faction of the National Assembly also criticized the compulsion to wear widespread masks. Gevorg Gorgisyan accompanied his speech on this topic with a caption, “It is written on the mask box that it does not protect against Covid 19.”

Minister of Health mocked Gorgisyan’s post “Next, Mr. Gorgisyan will talk about chipping with 5G towers […]”

The head of “Bright Armenia” Edmon Marukyan presented the critique of the masks. “We will not allow you to turn the National Assembly into a parliament named after Muammar al-Gaddafi …”

Among the critics of wearing masks were doctors. For example, Nune Avanesyan (presenting herself as Nune Nersisyan), former director of the Masis Medical Center, a doctor who spreads false news about offering money to relatives in morgues and who called on people not to wear masks on May 29.

The so-called “New World Order” conspiracy theory is widespread in different countries. According to it, powerful and evil forces are trying to establish a new, totalitarian world order on the planet, so that they can easily control and rule the world’s population.

This story is flexible and inclusive. Depending on the circumstances, it can change, expand, and create different stories.

Thus, in the days of the coronavirus, Bill Gates became the embodiment of the evil and powerful forces and by chipping or by vaccinating (look for reliable information about vaccinations on the website of the Ministry of Health) population making use of a tool to establish a totalitarian world order.

Believers in this conspiracy theory are always looking for signs of a conspiracy. For example, they see a sign of its existence in the recently circulated “new normal” phrase, which was also used by Arsen Torosyan, thus creating a nickname for a photo of him wearing a mask.

Believers in the New World Order believe that this global program has been revealed, and they must fight to prevent the establishment of totalitarian regimes.

On May 26, blogger Hayk Kostanyan and Karen Vardanyan, executive director of the Union of Advanced Technology Enterprises, and Vardan Petrosyan, a lecturer at the Polytechnic University, took to Facebook to share the story via live video, stating that Bill Gates had created the contagion and that international organizations were helping him do it.

In the words of Kostanyan, Vardanyan and Petrosyan, the international organizations and the rich Gates are the evil forces that want to take over the world, and the Ministers of Health of Armenia and other countries are the puppets of these forces.

This video garnered 46,000 views. Rev. Sahak Galstyan, a Facebook user’s live video, garnered nearly twice as many views, almost 87,000, where he talks about the same “revelations” about Bill Gates’ plot and the puppet government of Armenia.

The conspiracy theory about 5G towers that had been circulating on social media has become less common in the media in recent weeks. Instead, it is religiously disseminated by Marina Khachatryan, a former member of the Yerevan Council and former medical worker.

On May 20, Khachatryan announced a series of live videos, claiming that the quarantine had been announced so that people could be locked up at home and the government could secretly install 5G towers in different districts of Yerevan. Her live video from Arabkir alone has 135,000 views. Despite the large number of views, the video has a disproportionately small amount of comments (only 20).

Contrary to Khachatryan’s claims, there are no 5G stations in Armenia. This was announced by the three mobile operators in a joint statement. Moreover, the 5G connection is not known to be particularly harmful to health.

Our neighbors also had no shortage of myths

The “Stop 5G in Georgia” Facebook group was active in neighboring Georgia: as in Armenia, many users have blamed the evil of the coronavirus on the 5G telecommunications network.

Another bunch of myths referred to the old Russian tale of American biological laboratories. A new branch of this story stood out last week. The Saqinform website stated that the success of the Georgian laboratory receiving funding from the United States in overcoming the coronavirus is just PR.

The Georgian branch of the Russian news site NewsFront questioned the effectiveness of the laboratory. In its article, NewsFront revisited the laboratory’s “US Military Projects.”

In Russia, the government suspected that the death toll from coronavirus among doctors in Russia was higher than in other countries.

And those websites that are non-state, but adjacent to the Kremlin, noticed a satanic symbol in Bill Gates’ wife’s pendant. Well-known director Nikita Mikhalkov continued to collect myths and legends about the coronavirus. The fear-inducing conspiracy theories spread by Mikhalkov are also circulating on Armenian-language Facebook.

By the way, Mikhalkov best formulated the logic of disseminating false information. “If I insist on something, I am not obliged to present evidence. If you say the opposite, you must prove it. Is that not so?”

In other words, Mikhalkov, like many other figures spreading false or unverified information, reserves the right to make an unfounded statement and demands that the other party proves them wrong. 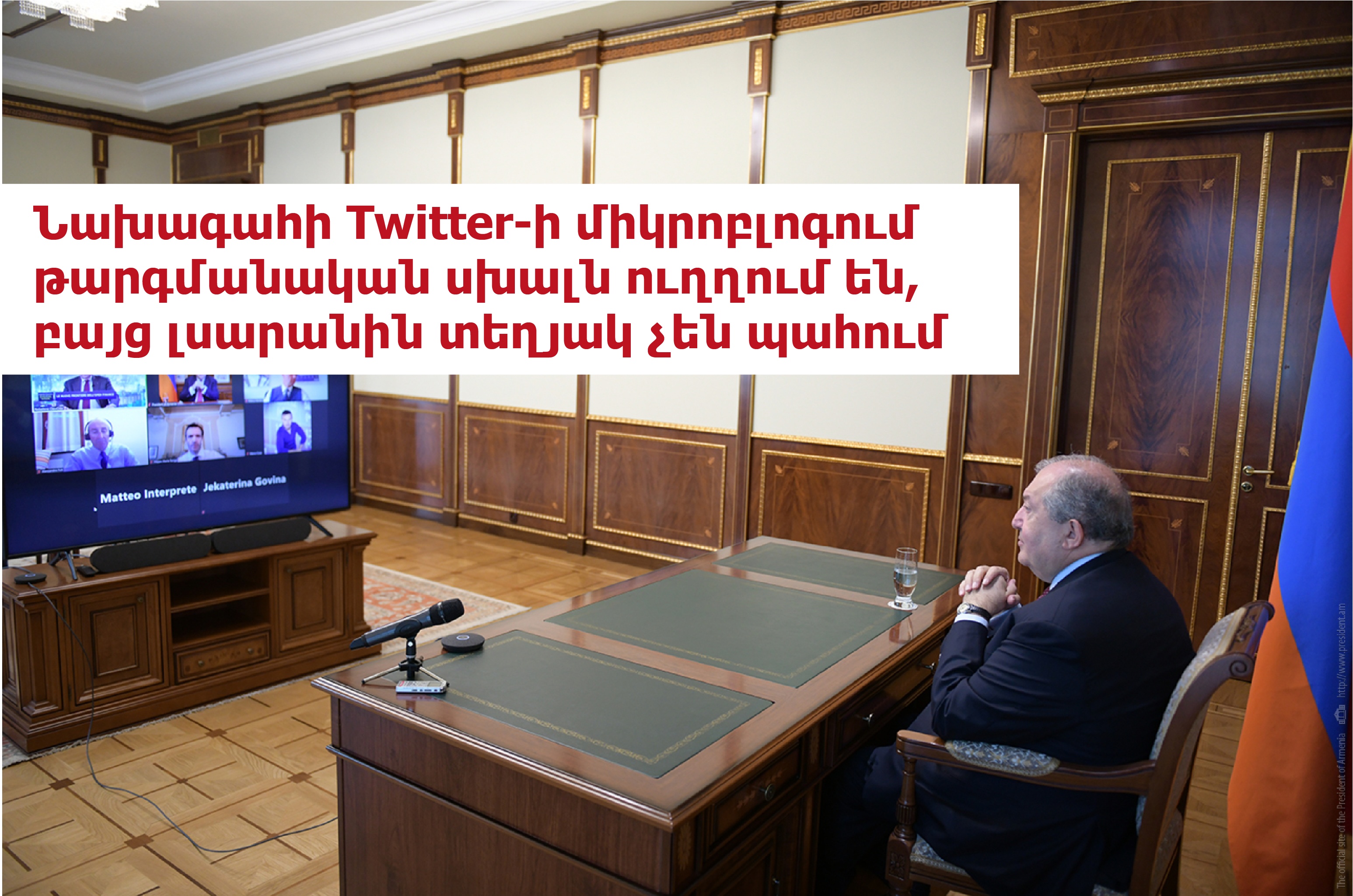 The President Made A Translation Error, Corrected It, But Did Not Inform The Audience
Arshaluys Barseghyan
Newsroom 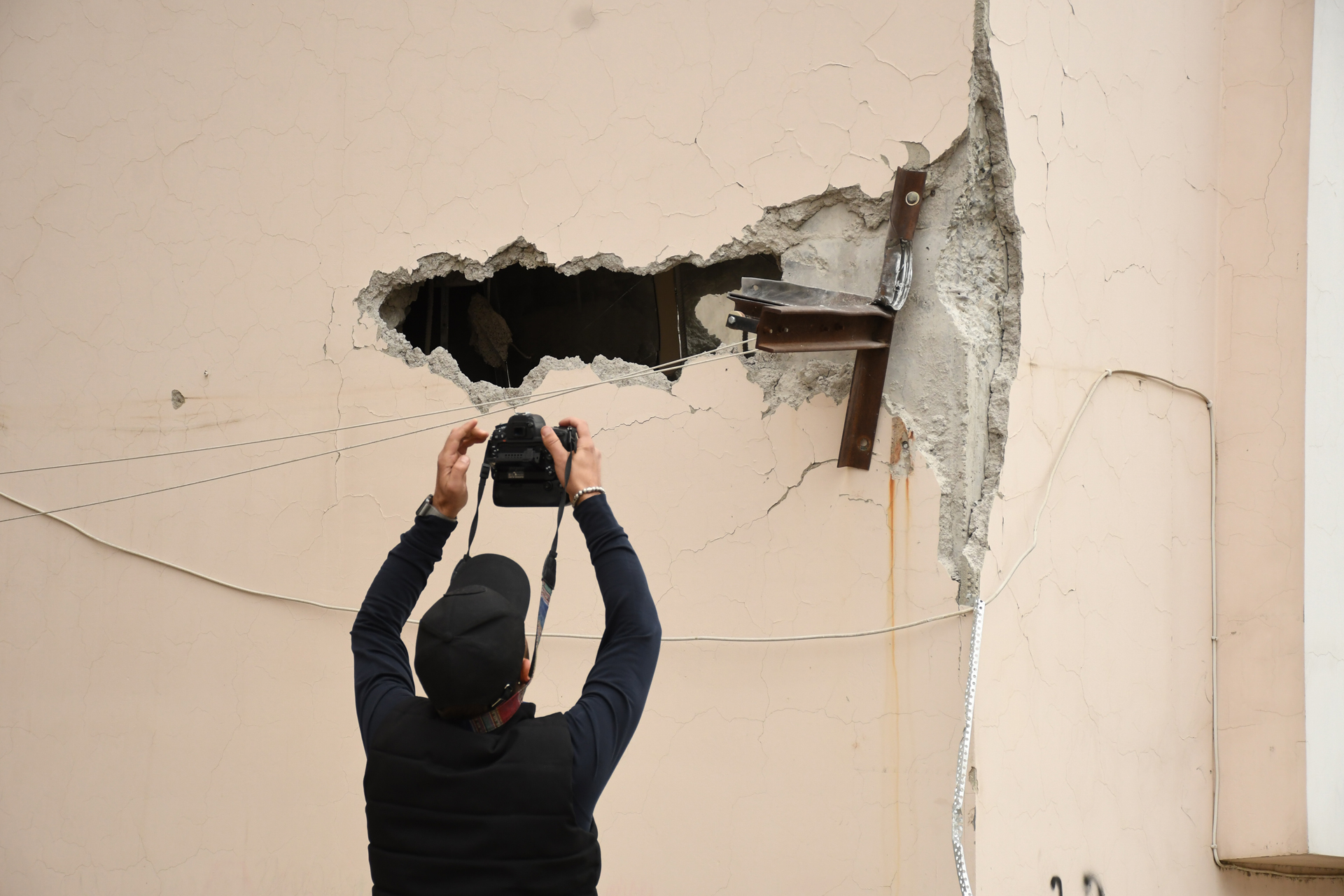 Photos From Behind The Front Lines
Nune Hakhverdyan
Verified 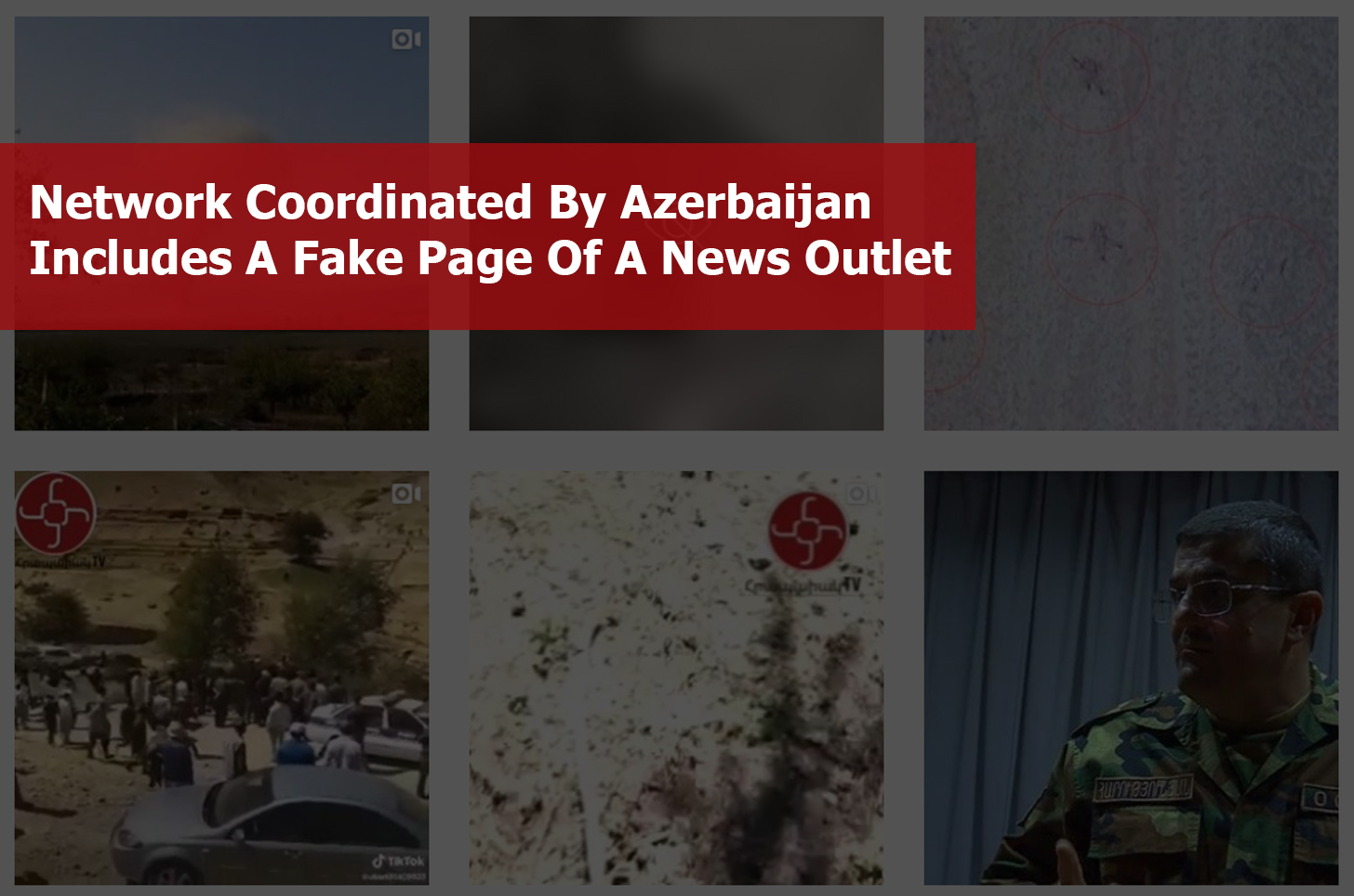 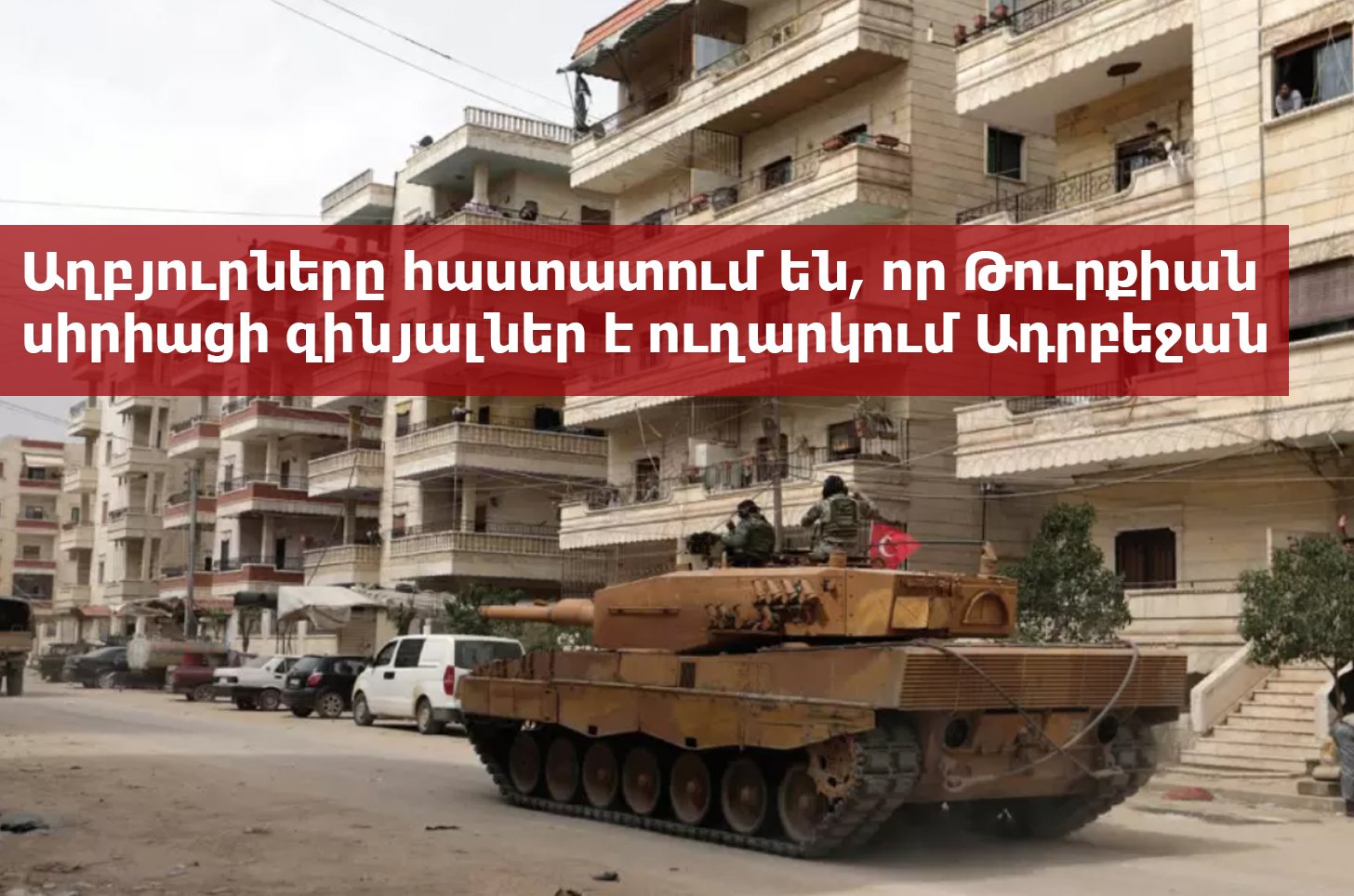