Fake And Denied News Between May 1-15 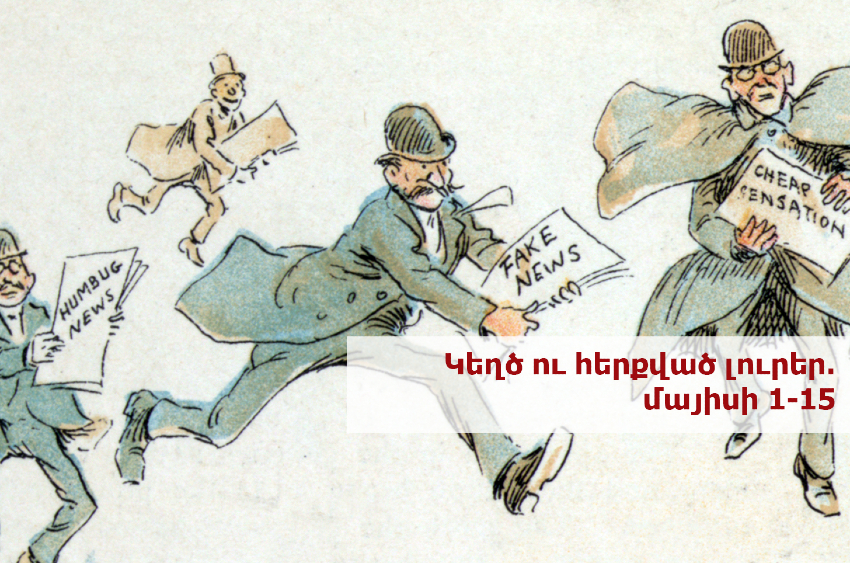 In the first half of May, the media reprinted the comment made on Arthur Aleksanyan’s fake page, distorted the content of the Lanzarote Convention and continued to spread false news about the coronavirus.

On May 5, 1in.am reported that wrestler Arthur Aleksanyan, a five-time European champion, expressed his support for Gurgen Khachatryan, the son of Gagik Khachatryan, Chairman of the Board of Directors of Ucom and former Minister of Finance.

The occasion was a Facebook comment by a user named Artur Aleksanyan․ “Gurgen, don’t give up! #Respect #Solidarity,” the user wrote. The news was spread by a number of other websites, such as Zham-am, YN.am, armlife.am and others.

Later Artur Aleksanyan informed 1lurer.am, “I am stating as a fact that I am not the author of the post made on the Facebook page using my name yesterday.”

Unsubstantiated information from a reliable source turned out to be wrong

On May 5, many news websites wrote that the US state of Minnesota recognized the Republic of Artsakh.

The source of the information was the Facebook post of Anush Ghavalyan, Advisor to the Artsakh National Assembly Speaker. Ghavalyan said that she had received the information from American-Armenian lobbyists.

Neither Ghavalyan nor the news outlets had checked the news before spreading it. Only later did Ghavalyan write that there was no final version of the resolution on the Minnesota Senate website, which is why she closed her previous post.

There was no “riot” in the NSS

“A revolt is brewing in the NSS,” news.am wrote, and analitik.am reported the news as well citing news.am. The information was spread by mushroom websites and the Azerbaijani press.

The NSS denied the news, noting that they are continuing to work as usual. High-ranking NSS members have not yet resigned.

The Lanzarote Convention is a target of speculation

On May 11, the National Assembly ratified the Council of Europe Convention on the Protection of Children from Sexual Exploitation and Sexual Violence. This convention was adopted in the city of Lanzarote and was signed by Armenia in 2010.

As in the case of the Istanbul Convention, another Council of Europe document, this one came under the scrutiny of speculation and false information.

Many politicians, the media and extremist conservative groups have stated that the convention is anti-national and dangerous. Channel 5 reported that in this way children should receive “sex education” at school, and the chairman of the Chamber of Advocates Ara Zohrabyan was once again concerned about the destruction of the institution of the family.

Some of these allegations do not correspond to reality, and some are distorted. The convention is about the mechanisms used by the state to protect children from sexual violence.

The “fact-checking platform” touched upon the content of the convention in detail. The convention was briefly presented by panarmenian.net. The Convention can be read here, in Armenian.

There was no shortage of false news about the coronavirus

Fake news about the coronavirus did not stop in the first half of May. Karen Vardanyan, the executive director of the Union of Advanced Technology Enterprises, was especially active in spreading myths. On May 4, Minister Arsen Torosyan accused Vardanyan of spreading “absurd allegations” on his Facebook page. Media.am touched upon Vardanyan’s claims in detail and clarified that he even spreads myths about his profession.

Active Facebook user, doctor Hayk Manasyan declared the Minister of Health “Agent of Foreign Forces,” Soso Pavliashvili assured that the coronavirus was created artificially, and spy George Kevorkian considered the pavilion a part of the conspiratorial plan to hand over the lands.

A number of news outlets were looking for a connection between different physiological features and coronavirus. Thus, sociologist Aharon Adibekyan, repeating the opinion of a Russian doctor, insisting that those with blood type A are more vulnerable to the coronavirus. He also said that 80% of Armenians have blood type A.

News.am found another reason for vulnerability towards the coronavirus ․ Low testosterone levels in men. All these claims are not substantiated by scientific data.

One of the most common allegations about the pandemic is the Russian propaganda that the US-funded National Center for Disease Control and Prevention is spreading the infection.

On May 7, one of Robert Kocharyan’s supporters even organized a demonstration against the National Center for DCP.

Media.am studied the statements made at the rally and pieced together the false rumors about the National Center for DCP that have been circulating for years.

A photo from the news set of Public TV is being spread on the Internet and a call is being made to follow the link to win. The photo shows host Mary Nersisyan. 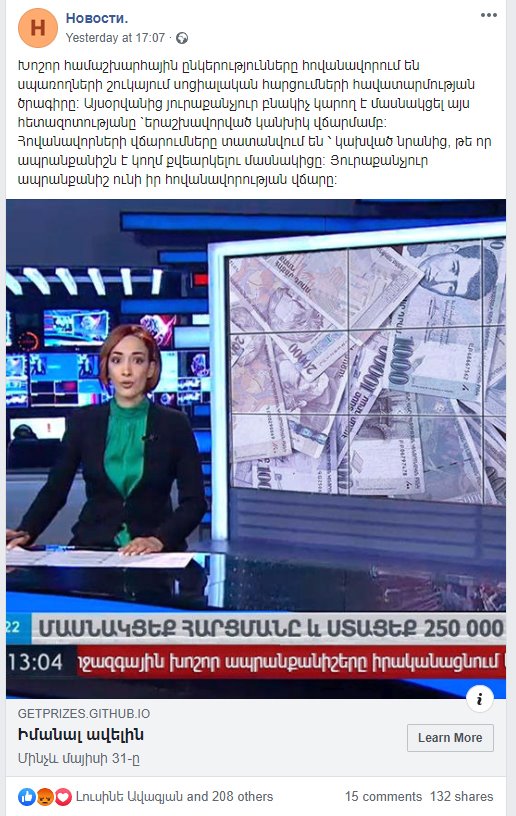 Public Television announced that the link has nothing to do with the TV company or Mary Nersisyan.

Public TV also urged users not to follow the link. It can be concluded from the link’s name and the promise of making an easy profit, that it is a fraud, and users can be fraudulently extorted for money.

In March, Media.am referred to the cases of widespread fraud on Facebook. In the event of an emergency, it is important to be wary of false news and fraud.