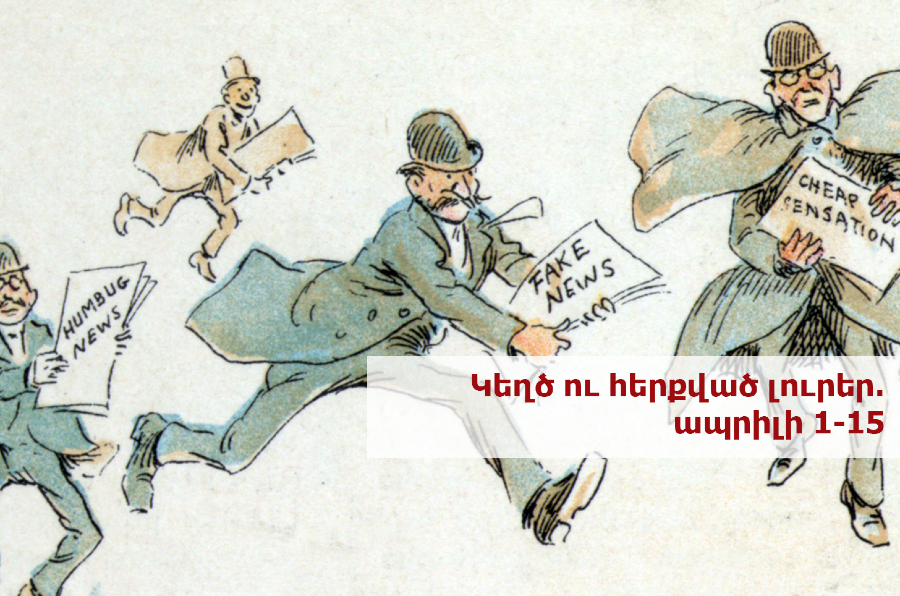 Coronavirus was the “main character” of fake news in April. However, there were also a number of wrong statements about the Civil Aviation Committee and its problems.

Wrong statements about the scandal around the Civil Aviation Committee

The story contained some mistakes – the same article stated that CAC had not been deprived of a license (international organizations are not eligible to license CAC or deprive it of a license.) In spite of that, this publication kick-started a continuous scandal around CAC.

Far-right activists and “hidden” Facebook users repeated the 168.am statements. They were republished by Yerevan.Today, Hayeli.am, Analitik.am.

CAC published a clarification the following day. It turned out that the European Union Aviation Safety Agency (EASA) had discovered serious shortcomings in Armenia’s CAC activities, suspending the flights of some Armenian air companies to Europe.

A few days later, it was reported that Hakob Chagharyan, the Prime Minister’s adviser on aviation, had lost his position. Chagharyan had suggested the prime minister to involve “a team of real experts” in CAC. Tatevik Revazyan, the head of CAC, said that there were serious problems in CAC, and it would take time to solve them.

Disinfo in Armenian language is disseminated from Azerbaijan

American Atlantic Council’s Digital Forensic Research Lab (DFRLab) wrote about the disinfo in Armenian Facebook groups spread by Azerbaijan in the days of the pandemic.

The website reported that a Facebook post, alleging that COVID-19 had spread through an Armenian military unit, had been disseminated from several accounts, including the account of singer Armen Movsisyan. Movsisyan wrote that hackers had taken control of his fan page, and DFRLab noted that the page manager was located in Azerbaijan. The page has since been removed.

On April 8, Russian Moscow Komsomolets newspaper published fake info about the labs of the Armenian National Center of Disease Control and Prevention.

The newspaper claimed that the “Pentagon-funded” laboratories were sources of Coronavirus outbreaks, and that American virologists conducted clinical trials banned in the USA.

Russian sites have often spread disinfo about those labs functioning in Armenia. Moscow Komsomolets newspaper was not the first one to publish Coronavirus-related claims – Cont.ws (which is not a news site) had published them back in March.

Infocheck.am mentions that Armenian-based labs have been receiving support from Russia as well.

A Harvard University professor has not created Coronavirus

On April 6, armdaily.am wrote that “the “creator” of Covid-19 for China was arrested in the United States.” The article claimed that a Harvard University professor had manufactured the new Coronavirus and sold it to China. There was a video piece attached to the article but there was not a single word about Coronavirus in it.

The Harvard University professor was indeed arrested. However, it happened two months ago, on a completely different charge. He had received a 15 million USD grant from the US Department of Defense and the National Institutes of Health. Meanwhile, he had also received 1.5 million USD from China for setting up a laboratory in Wuhan, concealing that fact from the US government, although it would have caused a conflict of interest.

The fake news was quickly spread in the international and national online media, as well as the social media. The news was republished by Iravunk newspaper, yn.am and others. “Mushroom” websites also published the fake info.

In April, the press and the social media were actively circulating the myths and conspiracy theories about the expected Coronavirus vaccination.

One of the most widespread statements was the claim that Coronavirus had been created by billionaire Bill Gates, in order to frighten people and make vaccinations mandatory. There was another popular narrative about “chipping” people. It claimed that “a liquid chip” would be injected through vaccines, allowing to track people.

Gastroenterologist Hayk Manasyan disseminated another myth, claiming that people that had received flu vaccines were more vulnerable to Coronavirus.

On April 5, Health Minister Arsen Torosyan posted a status about the dangers of anti- vaccination activism.

One of the theories suggests that 5G networks cause Covid-19, or weakens the immune system, making people more susceptible to infection.

5G-related conspiracy theories have been also spread by Karen Vardanyan, an IT expert and the CEO of the Union of Advanced Technology Enterprises.

Some Facebook users even threatened to break the 5G antennas as soon as they were set up in Armenia. 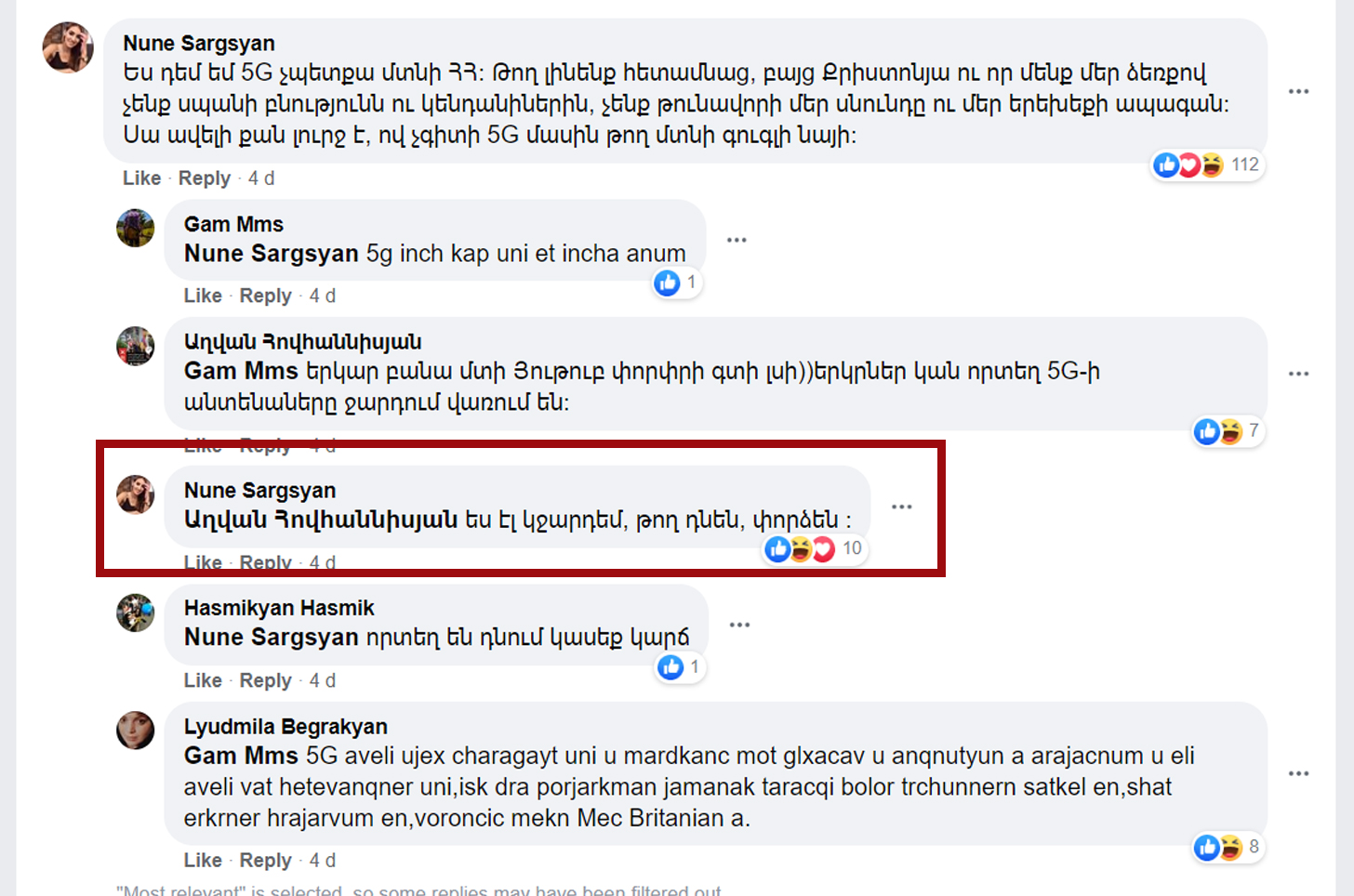 5G networks do not emit harmful radiation, and viruses cannot travel on radio waves. World Health Organization mentions that Coronavirus is spreading in many countries that do not have 5G mobile networks (for example, in Armenia.)

Treatment against Coronavirus has not been found yet

On April 11 some media wrote that the most effective treatment against Coronavirus has been found. The sites referred to the statement of Veronika Skvortsova, the former Health Minister of Russia and the current head of the Russian Federal Medical and Biological Agency, “Mefloquine completely inhibits the replication of the SARS-CoV-2 virus in cell culture.”

However, the claim about the most effective treatment against Coronavirus is completely wrong. World Health Organization has reported that to date, there is no specific medicine recommended to treat the new Coronavirus.