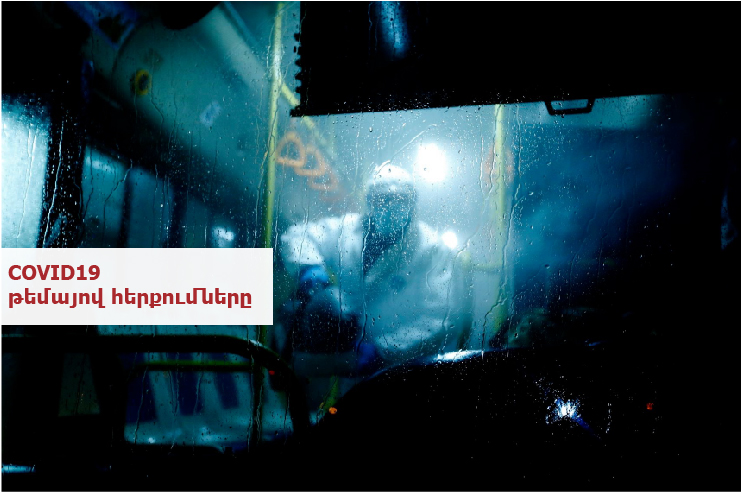 The first Coronavirus case was registered in Armenia on March 1. Then it started spreading quickly after a woman, having arrived from Italy, took part in an engagement party in Vagharshapat.

The new virus spread with a huge wave of concerns and fake news.

Hraparak.am is one of the main platforms to actively cover Coronavirus and to publish exclusive info. Their newsfeed contains official and international stories, as well as news circulated in social media.

Thus, the website has published Narek Samsonyan’s unverified status, according to which Ashot Pashinyan, the prime minister’s son, is in Sevan. The Information Checking Center has refuted the story.

Hraparak.am does not avoid misleading content and headlines. For example, one of the headlines says, “Gagik Tsarukyan presented a Niva car to the first Coronavirus patient.” When we read the story, it turns out that it’s just a joke of a Facebook user.

Apart from that, Hraparak.am has published a few sensational stories that have been completely or partially refuted:

Hraparak.am, in its turn, conducted fact-checking, finding out that the info disseminated by infoport.am was not true – former RPA deputy Seyran Saroyan’s sons and daughter-in-law did not attend the famous engagement party in Etchmiadzin.

For example, when you read one of the stories with an unspecified headline, it becomes clear that the first death and 4 new Coronavirus cases have been registered in Azerbaijan, and not in Armenia, as it might seem from the headline. Similarly, 41 new cases were registered not in Armenia but in the capital of Malaysia, and 250 people died in Italy, and not in Armenia.

The Ministry of Health refuted the site’s info that there was a coronavirus-positive child at pediatric hospital.

Note that a few days after this publication – on March 15 – the Ministry of Health informed about a Coronavirus-positive schoolchild. It becomes clear from comments and a separate status that the kid is from the same Etchmiadzin circle and has nothing to do with the hayeli.am case, according to which the patient was a 15-year-old boy that had been at a competition in Georgia.

As for Facebook content, the website often reposts it without checking, using panic-provoking headlines. For example, “Breaking news – Dilijan-based Monte Melkonyan Military College is being evacuated.” Ministry of Defense press secretary Shushan Stepanyan refuted the info about evacuation. She explained that the college had the same program as high schools, and the classes were postponed until March 23, like the other educational institutions. Later, the press secretary informed that citizens having arrived from Italy were isolated inside the territory of the military college.

Iravunk.com posted the joke about the Niva car, presenting it as an accurate info. Another publication presented the conspiracy theory, according to which 26 million deaths were “stipulated” as a result of Coronavirus.

Conspiracy theories may evoke panic. The site referred to a confusing photo and some Facebook posts, writing about “a real panic” in some stores and stating that “people took away loaves of bread from each other, and some stores refused to sell more than a loaf to each costumer.” 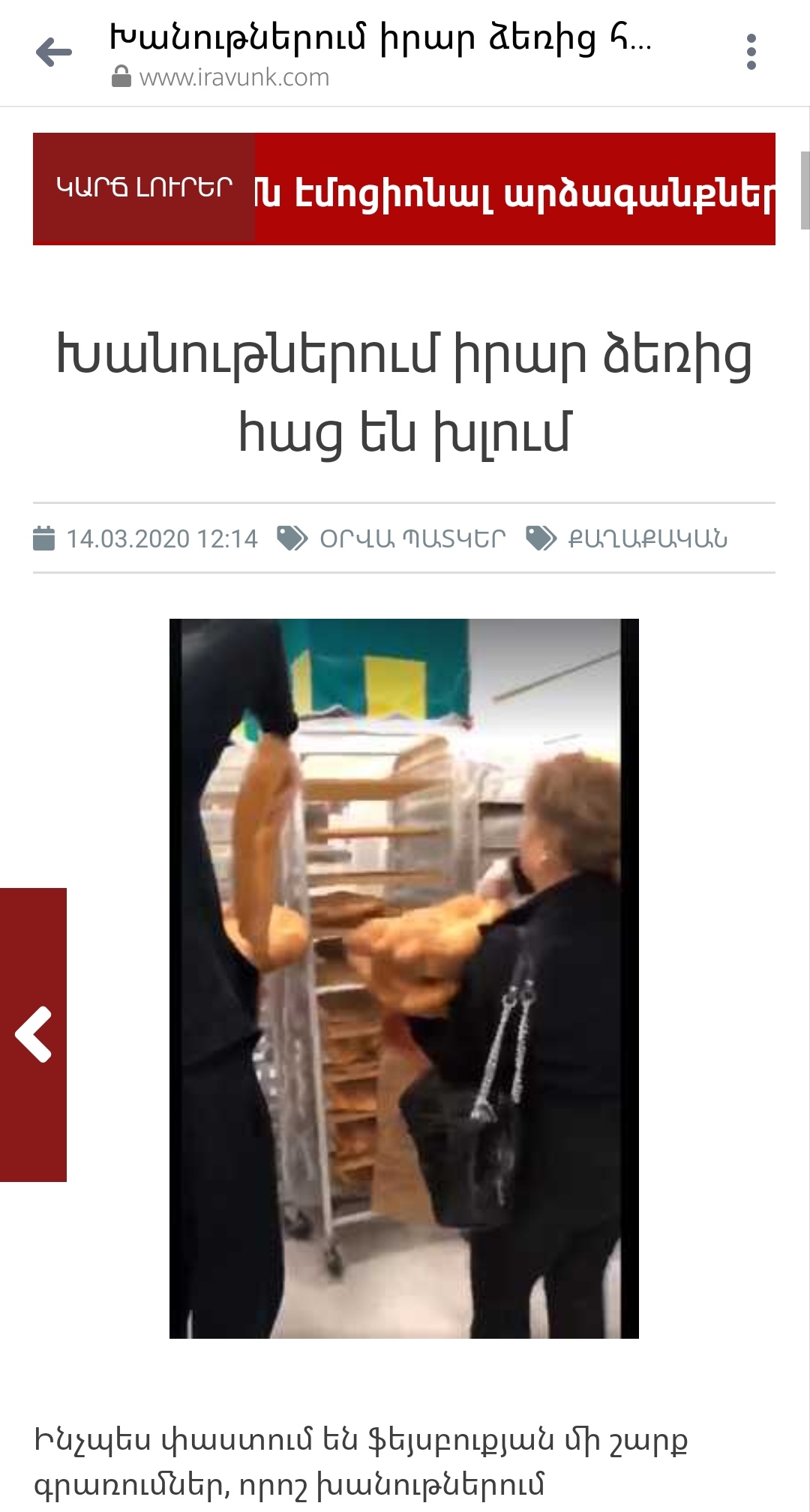 For example, the site has singled out the top 10 deadliest viruses, without specifying the info source. Another publication referred to an “expert from Taiwan,” suggesting a self-check test to find out whether a person had coronavirus simply by holding their breath for 10 seconds.

Iravunk.com also suggested a “deputy’s life hack” for the treatment of Coronavirus. However, only after you click on the article, it becomes clear that “a steam bath, alcohol and sex” are offered by a deputy from Ukraine, and not Armenia.

168.am has been comprehensively covering Coronavirus-related news, including the info on the worldwide spread of the virus. However, the website also publishes unsubstantiated stories, based just on one opinion or one source.

The site just re-published, without checking, Hrant Melik-Shahnazaryan’s status, stating that the Nork hospital management would not allow any video shooting there because of the extremely embarrassing state of the hospital. It turned out that this assessment was quite manipulative.

The Information Checking Center coordinator Rafayel Afrikyan responded to yet another misleading article by 168.am., “The website has written that the President of Brazil is Coronavirus-positive, making a reference to Lenta.ru that claims that it’s A LIE. Readers can draw their own conclusions about the photo posted by 168.am…” 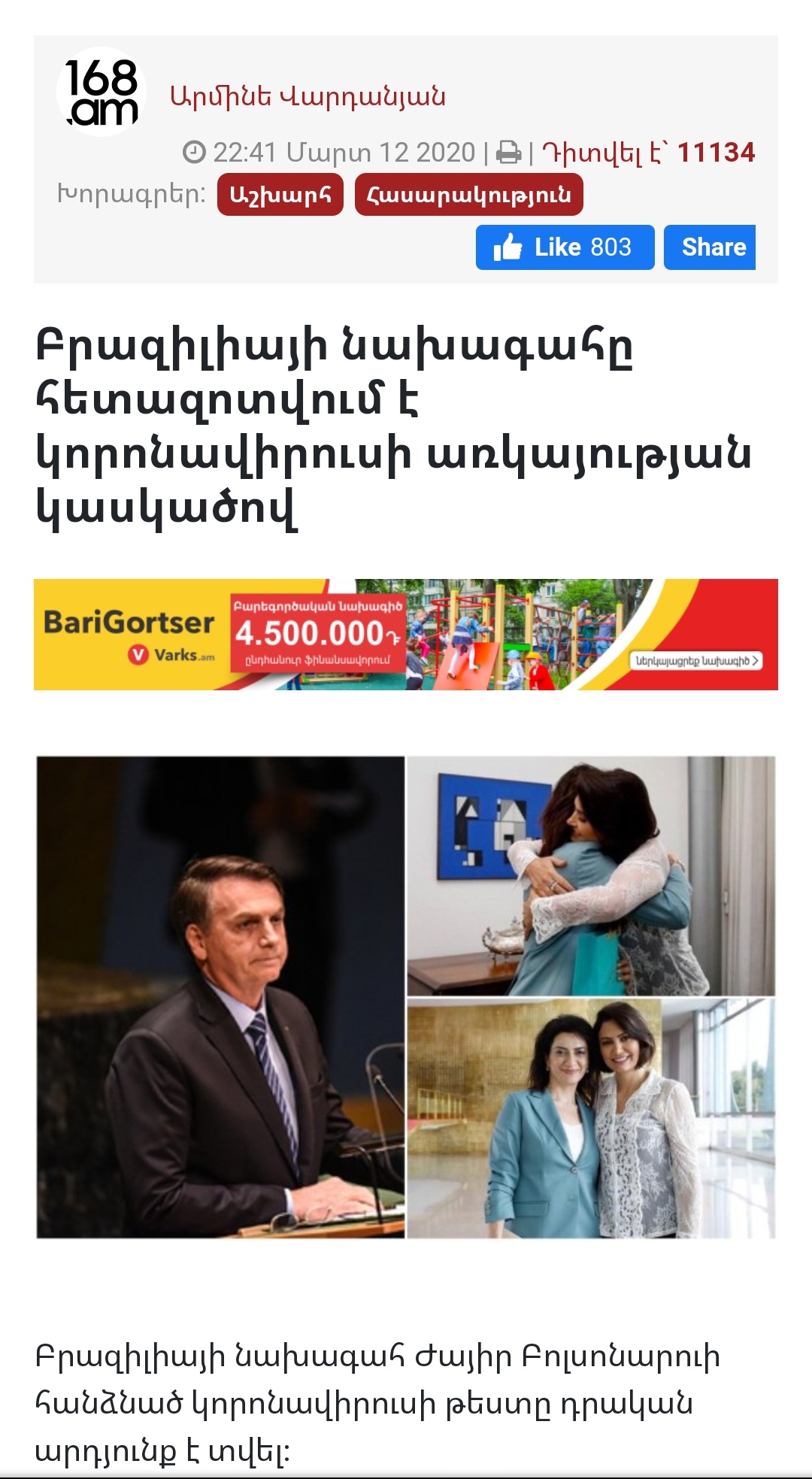 The headline of this story has been later edited, which has been mentioned in the site.

It is worth paying attention to how 168.am has been working with sources. One of the stories explains how to clean the smartphones that can also transmit Coronavirus. Each of the 5 paragraphs of the story makes a reference to a different source. However, none of them is an active one.

And the medical tips on Coronavirus prevention are taken from the confusing “Fenghuang van information portal.” Google search could not find any info about the portal, whereas Facebook suggested a Chinese restaurant called “Fenghuang.”

Surely, Coronavirus-related fake information is not limited to these media and examples.

For example, we have not included the fake info disseminated by the Armenian media that Pope had tested positive for Coronavirus. МСМ News was the original source that spread the fake news. Another example is CivilNet.am that has already removed the info stating that Catholicos Karekin II has left the country, due to the current circumstances.