Fake News That Was Circulated And Refuted Between November 15-30 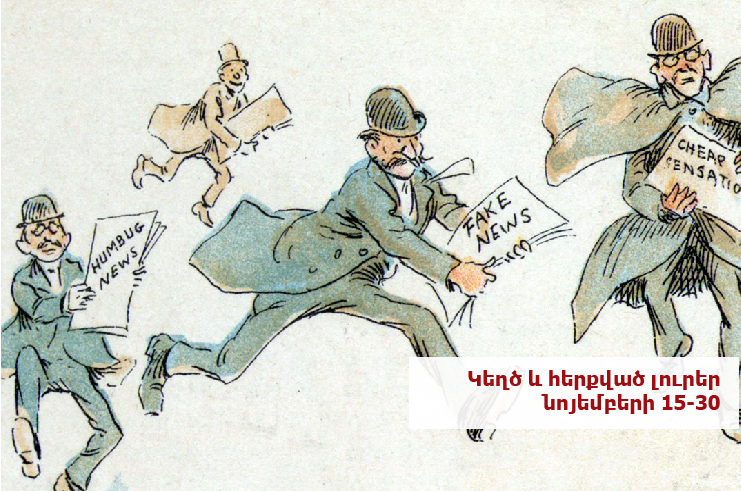 In the second half of November, the political forces – the Republican Party and the ARF – were more active in finding false and manipulative information. The journalistic exchange between Armenia, Nagorno Karabakh and Azerbaijan, became the topic of discussion, in connection with which the Azerbaijani Foreign Ministry spread false information. During this period the forces that passed to the Parliament of the Third Republic of Armenia and their media relations also were the subject of publications.

There is a mistake in Prime Minister Pashinyan’s November 27 post. RPA Vice President Armen Ashotyan was the one who found the mistake. Moreover, the mistake was not one but two:

1 ․ According to the British Analytical Institute’s 2019 Legatum Prosperity Index, Armenia ranked 61st, improving its position not by 27, but by 7 points, compared to last year.

2 ․ Ashotyan also points out that the authors compare the ratings with the countries, not by 9, but by 12 criteria.

This statistical mess is addressed by the Government Information Check Center SNCO, corrects Ashotyan, then corrects itself, however not by denying it, but by removing the material from the site and search engine memory. However, the same Ashotyan posted a photo on Facebook, detailing and stating, “I was right, Nikol was wrong.” 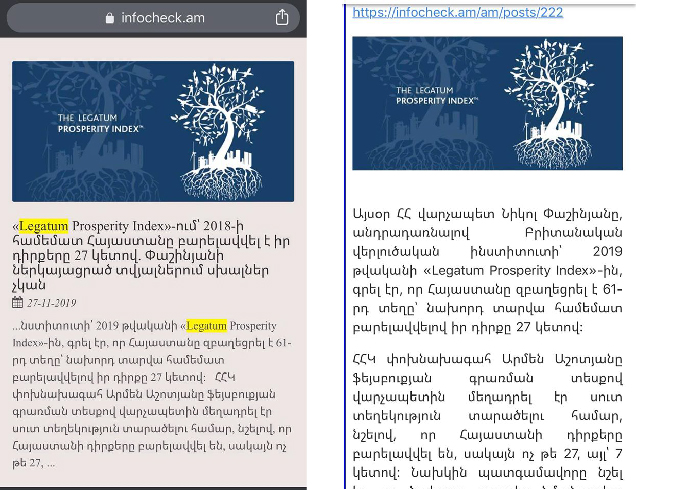 The news was checked by the Fact-Checking Platform which discovered that the methodology for the latest 2019 report had been changed. The authors have published the results of previous years according to a new methodology. As a result, according to Ashotyan, Armenia has improved its position by 7 places, and the authors of the rating compare the countries with 12 criteria.

Artur Ghazinyan, the leader of the One Armenia party’s statement, “The past one and a half years have shown all the splendor and misery of the lack of ‘isms,’ which have been transformed into a faceless and anonymous nature of power,” at one point seemed to have two authors.

It was posted separately under the hashtag on the 5th Channel’s Facebook page #Quotations on November 24, with one case attributed to Ghazinyan and the other to former Artsakh Human Rights Defender Ruben Melikyan. As a result, the two quotes were merged into one picture and circulated among Facebook users. 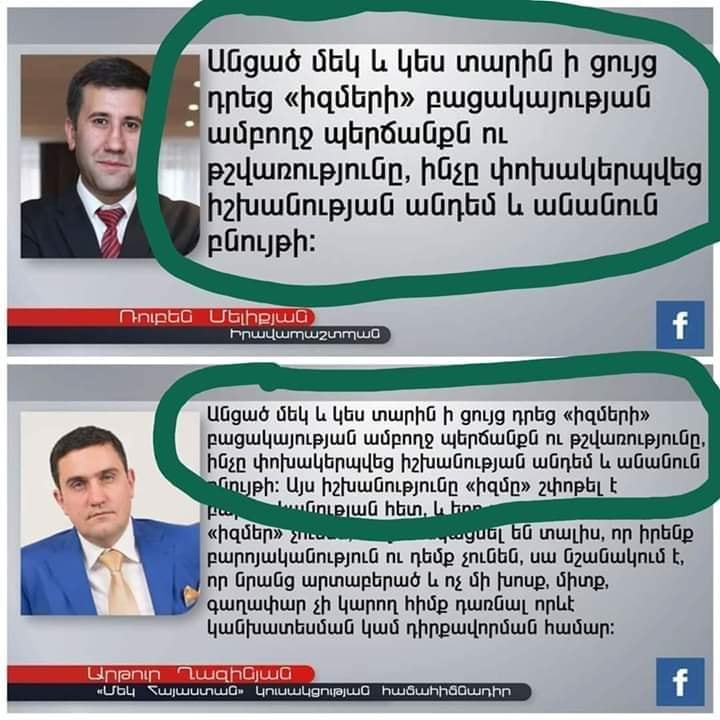 The picture was shared by Artur Hovhannisyan, a member of the “My Step” faction, who wrote, “There was a famous phrase in the Soviet movie, “Diamond Hand,” Children – ice cream, women – flowers. See that you don’t mix it up!… ?” The MP later informed his audience that Ruben Melikyan had denied having said such a thing. At the latter’s request, the 5th Channel made a publication regarding the technical error.

ARF Youth Union members, who demanded the resignation of Minister of Education and Science Arayik Harutyunyan in early November, checked the minister’s announcement during a briefing according to which the Prosecutor’s Office and the Investigative Committee had requested that they submit lists of criminal cases pertaining to ARF leadership.

In response, the ARF Dashnaktsutyun sent inquiries to the bodies designated by the Minister, as well as to the SIS, Police, and the Ministry of Justice to find out that only the RA Investigative Committee had received a request from the Ministry, and only after the Minister’s statement above.

On November 25 in the National Assembly, Edmon Marukyan, the head of the Enlightened Armenia faction, declared that “the only parliamentary force in the history of Armenia that doesn’t have a media outlet is Enlightened Armenia.” Marukyan’s statement was checked by the “Fact-Checking Platform” which found that his statement was untrue. Until recently, his party had a backing media, 1in.am.

Moreover, in the political life of Armenia it’s not Enlightened Armenia, but the Armenian National Unity and Heritage parties that have had no media resources.

The platform also makes a historical reference to the forces that have passed through parliament in the Third Republic of Armenia and their media relations. For example, the Communist Party’s microphone was Soviet Armenia, and the Armenian National Movement was supported by Hayk. Ararat TV was affiliated with the RPA, and Shogher Matevosyan, the leader of the exclusively women-run parliament, was the editor-in-chief of the Chorrord Ishkhanutyun newspaper and so on.

Spokeswoman for the Azerbaijani Foreign Ministry Leyla Abdullayeva issued a manipulative statement on November 17-21 on the professional exchange visits between journalists from Artsakh, Armenia and Azerbaijan. According to her, Armenian journalists in Azerbaijan, along with journalists, representatives of the NGO sector and academics, met with the Azerbaijani community of Nagorno Karabakh.

Artyom Yerkanyan, a Shant TV commentator, denied the rumor on Liberty Pavilion, calling it a lie. He explained that a representative of a non-governmental organization called “Azerbaijani Community of Nagorno Karabakh” attended the meeting as a representative of the NGO sector. “He was not particularly active in the debate. The fact of his presence at that meeting does not at all prove that Armenian journalists met with the Azerbaijani community of Nagorno Karabakh,” Yerkanyan said.