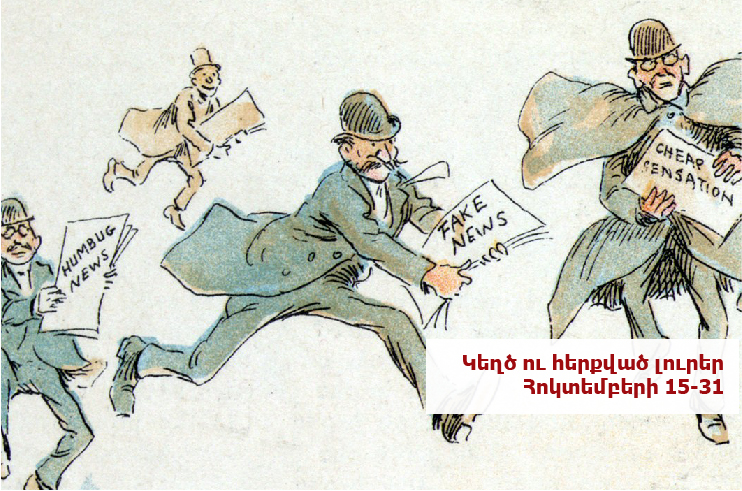 One of the rumors in mid-October was RyanAir’s budget airline ticket price. An attempt was made to throw news about the mental health of RA Prime Minister Nikol Pashinyan into the media. Former NA Speaker Ara Babloyan’s statements have also been refuted, and one refute was spread by “System Of A Down.”

In October, it was announced that by 2020, with the Irish budget airline, RyanAir, Armenians would be able to reach Europe at a lower price. The average ticket price is 35 euros. And while people were already packing suitcases, it was rumored that the cheap flights weren’t really cheap – there was state subsidy.

Russian blogger Alexander Lapshin wrote about it, explaining that Tatevik Revazyan was able to bring RyanAir to Armenia as the airport fees were canceled for the airline. That is to say, the $76 airport fare for one passenger will be covered by the state budget. Moreover, in 2015, there were talks with RyanAir, but the previous authorities did not agree to this condition. Suren Sahakyan, secretary of the Citizens’ Party, also made a similar post on Facebook and said in simple language: “Those who don’t fly will also pay for their flights.” Both posts were widely republished and became a media sensation.

However, only the next day it became clear that the news was untrue. The Prime Minister’s Spokesman said this in a conversation with Armenpress on October 17. Vladimir Karapetyan clarified that he had not provided any financial support to the airline except for the privilege mentioned by the Prime Minister in order to organize flights from Zvartnots Airport in Yerevan. And in Gyumri there will be additional financial incentives. No details on the content of the incentives.

On October 23, Hraparak daily wrote that the rock band System of a Down received $ 1.2 million in royalties for a concert in Yerevan on the occasion of the 100th anniversary of the genocide, without specifying who it was that had paid for it.

The paper referred to the upcoming concert in 2020 and wrote that “This time again Serj Tankian will sing in Armenia for a great royalty.” The newspaper places the upcoming concert and big royalty within the context of the exploitation of the Amulsar mine, hinting that they have silenced Tankian. “Note that after the announcement of the concert, Tankian no longer speaks about the inadmissibility of operating Amulsar. This is a concert-barter between the Armenian authorities and him, ”the newspaper wrote.

In the comment section of the very same piece, spokesman for the Prime Minister, Vladimir Karapetyan, denied the rumor and suggested that the question regarding the means for funding the concert should be addressed to the organizers.

As for the news of the royalties for the 2015 concert, they were later refuted on the rock band’s official Facebook page, moreover, it was disclosed as to what expenses the sponsor’s money was used for. SOAD also referred to the politicization of their work, “It is unfortunate that everything is politicized in a world where art is discredited for political purposes, for which misinformation or otherwise known as fake news is used.”

“We must ask a question: What country are we? Who do we want this country to be for? For Pakistanis, or people of intellect?” This racist statement made at a government meeting on October 24 became an opportunity for media.am to check the biographical details of Vahagn Vermishyan, the head of the Urban Development Committee.

Vermishyan, for example, stated at another cabinet meeting that he had “built more than 5 million buildings.” Media.am makes it clear that this is not realistic. If we divide the 5 million over the 55 years of his life, it turns out that since he was born, Vermishyan has designed about 249 buildings a day. The article also makes it clear that he has resigned as the chief architect of the Russian Oryol region after a wave of discontent and protest.

The article also touches upon some misleading assertions in Vermishyan’s biography on the Government’s website.

A number of media outlets and public-political figures regularly cover the issue of PM Pashinyan’s mental health problems. For example, in May of this year, Politik.am wrote, “More than 1,200 citizens are demanding that Pashinyan take a mental health test.” And already on October 28, yerevan.today published the article “What does Anna Hakobyan hand the Prime Minister, drugs?”

The video, posted in the same material, shows the visit of the Prime Minister and his wife to the Vanadzor Armenia Resort on October 26. The video shows with arrows that Anna Hakobyan puts something small from her hand into Pashinyan’s pants pocket. This edited clip is presented in the site as follows: “The following was done live: The Prime Minister’s wife pulls something out of her bag and makes sure that no one is looking at her, tensely placing it in her husband’s pocket. The Prime Minister does not show that something is being placed in his pocket; we assume he knows what he is.”

The suspicions of drugs are fueled by suspicions in the air that the Prime Minister is taking some drugs, and Anna Hakobyan is personally watching her husband to make sure that he takes the drugs on time. However, when looking at the full video, we see a different picture: The edited video does not show that the Vanadzor holiday badge fails to get pinned to Anna Hakobyan’s jacket as she gets out of the car. She is also unable to fit that same badge into her bag and it is this badge that she later puts in her husband’s pocket.

By the way, the incident was not accurately reported by a spokeswoman for the Prime Minister’s wife, speaking to lurer.com, saying that the Prime Minister’s badge had not been affixed and that the lady had inserted it in his pocket at that moment. This is another reason for yerevan.today to accuse the speaker of lying in another article.

The Information Review Center made note of the statement of former NA Speaker Ara Babloyan on October 23 that “I was removed from surgery yesterday and taken for interrogation, after which I came back and continued the operation.” Babloyan was questioned in connection with the indictment filed against Arsen Babayan, former deputy chief of staff at the Special Investigation Service.

Spokeswoman for the Special Investigation Service Marina Ohanjanyan reports that Babloyan was interrogated at his preferred time, moreover, the interrogation was also interrupted at his request provided he would appear the next day.

At the same briefing, the ex-Speaker of the National Assembly made another controversial statement that he committed a violation by assisting Nikol Pashinyan in coming to power. “I declare it official, the law enforcement officials have heard, let them investigate and find out where I have violated and what I have supported. If they decide to examine it, I’ll confirm it.”

Later, however, after consulting with his lawyer, Babloyan denied the truth of his statement. “After legal counseling with my lawyer, I realized that after being appointed to a state body under such conditions, the powers of a deputy automatically terminate with the force of law under Article 95 of the 2015 Constitution. I have nothing else to add to my interview.”